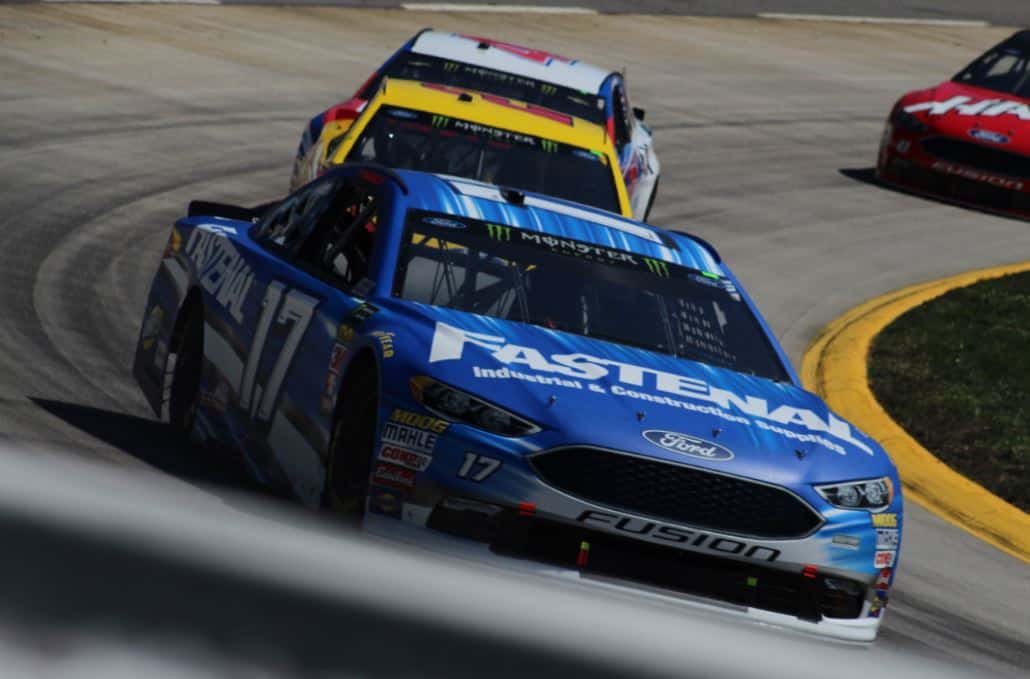 Just a few weeks ago, it was easy to explain the organization’s struggles: it was too early to tell; Chevrolet is behind the curve – which may still be the case; the team has two new drivers. And the thing is, all of that is completely true. But looking at the big picture, even as the organization is less than two years removed from a title, they’ve been behind — just a little bit here, a bad call there — since Jimmie Johnson took home his seventh championship.

All four HMS teams are inside the top 20 in points, but nowhere near contending for wins. Still, it’s hard to say that two of those teams aren’t performing about where they should be.

The No. 88 is coming off a dismal year that followed Dale Earnhardt Jr.’s injury in 2016, leaving the team with fill-ins for the stretch drive.

It is worth noting that this “stretch drive” also saw Johnson gunning for the title, which no doubt meant a lot of resources were devoted to the No. 48 as a result.

Alex Bowman has never had a full season in good equipment in the Cup Series, though he’s got experience on his side, and he’s looked solid so far.

Rookie William Byron is just that—a rookie, and a very young and relatively inexperienced one at that. Expecting too much, too soon is a disservice to the youngster, who is learning as he goes and is ahead of some much more experienced drivers in points. He needs time more than anything.

The explanation for Johnson may have been under everyone’s nose all along. Remember his pre-Cup days in the then-Busch Series and the kind of finishes he had? Right, neither does anyone else.

Johnson has always preferred the heavier, higher-horsepower Cup cars and it has shown. Today’s Cup cars are lighter and have less horsepower—a change which came about in the last couple of years, and one that has mirrored Johnson’s “slump.” If that’s the cause, there’s no easy solution.

The other thing in play here is whether Johnson and crew chief Chad Knaus have run their course. Knaus is often frustrated with the team’s own race strategy and that strategy isn’t as innovative as it once was. So there is a question mark there too, along with the fact that Johnson has a new car chief this season.

When Johnson failed to perform at Martinsville a couple weeks ago, though, that really hammered home that something is missing from this team.

Elliott looked a lot closer to winning last year. There is no point in denying that. But can blame be laid on the No. 9 team? That’s the bigger question.

As you will see, the common theme of the teams on this list is that most of them are Chevy teams, and while there’s no question the whole stable is struggling, it’s still important to note that a year ago the Toyota camp was in a similar situation with its then-new body. It’s still a little soon to hit the panic button…but that day is coming soon.

The lone Ford team on the list, RFR illustrates how easy it is for a team to fall from the top of the heap, and how hard it is to get a foothold to climb back up. In this case, the cars aren’t to blame in the way the Chevrolets might be for Hendrick; other Ford teams are tearing up the track, while the RFR teams are tearing up their cars. This is a team that a few years ago featured the likes of Matt Kenseth, Carl Edwards and Greg Biffle behind the wheel.

While Ricky Stenhouse Jr. has proved to be strong at select tracks, he and Trevor Bayne aren’t at the level of their predecessors, and that may be holding the entire organization back.

The organization has also struggled with sponsorship in recent years, with speculation that ownership won’t back off its prices despite their performance and something thatʻs hurting their cause.  The organization’s development program has suffered greatly in just the couple of seasons since they won the XFINITY Series title with Chris Buescher. RFR won three of five titles in that series between 2011-2015 but didn’t crack the top five in 2016 or 2017.

If we’re being completely honest here, RCR hasn’t been the same since Dale Earnhardt’s death. They won races and flirted with title contention with Kevin Harvick, but as a whole, RCR has failed to do one thing: run more than one truly competitive team within the organization.

Two attempts at four teams ended badly; this year the organization drops to two with a couple of satellites in Richard Petty Motorsports and Germain Racing.

It’s hard to call 2018 unsuccessful for RCR. Austin Dillon won the Daytona 500 in the No. 3, 20 years after Earnhardt did the same thing. Both Dillon and Ryan Newman are in the top 16 in points.

Still, it’s hard to say something isn’t missing, and has been for a while now. Earnhardt Childress Racing Engines are still among the best at the plate tracks but, until this year, weren’t as strong as the Hendrick camp, and it’s too soon to tell whether or not they are now.

Unlike Hendrick, RCR’s fall from the top was slow and not terribly steep. They aren’t terrible and they’re still among the sport’s top teams, but they aren’t competing with the most elite. There isn’t a glaring talent issue, but there’s just something they haven’t been able to overcome in the past few years.

It’s a little harder to put a small team on the list—the expectations just are not the same. But here’s a team that’s not living up to expectations within its own peer group, and when they were an organization that was at the top of the small-team heap a couple of seasons ago, it warrants a closer look.

On the surface, the team should be performing better. When Ty Dillon took over the ride last year, he brought with him a new level of equipment from RCR — and while that equipment is also not quite at the top, it’s certainly better than what many of the other small teams enjoy.

The improvement in equipment was not matched by improvement in performance, however, and Darrell Wallace Jr. is handily outperforming Dillon as another RCR satellite. Dillon was a rookie last year, so he gets a little slack. While his average finish was decent, overall he hasn’t met expectations.

This year so far has been abysmal for Dillon, though, with an average finish of 28th.  The last time the team had a start this poor was 2011 when they failed to qualify for the Daytona 500 and were starting and parking for several races of the year.

With a definite improvement in equipment, though, it’s hard to look at something other than driver or crew chief. Lady Luck has played a hand — and luck is important in racing — but this performance is a bitter pill to swallow for a team that was on the rise two or three years ago.

Well, not really CGR so much as the No. 1 team of Jamie McMurray; teammate Kyle Larson is ninth in points, the only Chevrolet driver in the top 10 with two top fives in six races. That makes this case a little different as it’s not an organization-wide problem (though, again, it can be argued that Hendrick’s isn’t, either).

Does that make it easier to fix? Maybe. McMurray isn’t getting any younger. He’s not a consistent winner, but he is a proven winner and has won some very big races, so the problem can’t be chalked up entirely to driver issues.

McMurray and crew chief Matt McCall have been solidly in the top 15 in points the last couple of years, so it’s not an issue of chemistry either.

In fact, McMurray’s problems could be the most difficult to diagnose because he and his team have a history of being solid, if unspectacular. There has been a little bad luck, but you can’t look at McMurray’s season and say he can’t buy a break, either.

Maybe, then, it’s a little of everything: the Camaro (and the overall lighter and less powerful cars of the last couple of seasons), McMurray’s age, a solid but unspectacular crew chief, bad luck… Whatever it is, the team is in a decent position to turn it around, because unlike the other organizations on the list, CGR has one car running very well.

That may put McMurray in the best position of any other driver on the list…but can he and his team capitalize?

Just because Team Penske finishes with top 10 finishes, only one driver so far is racking up laps. And it is NOT KES or Logano. Penske still has a lot of work to do. IMO.

For the past couple of years including this year, inspections have become more exact with less chance to bend or break the rules. It is obvious Johnson has suffered because Chad cannot get away with rule bending or breaking that he could in the past. Humm, Johnson’s driving or Chad’s innovation in past success?

…And after Chad on camera infamously saying to Jimmie saying something like “back the car up into the wall”. WHUT?????????? And NASCAR is memory served never did a damn thing! That “hot mike” moment spoke volumes IMO to the workings of the 48 car. And yet he is “7 TIME”…lol.

that sort of thing happens at every level of pro raving.

Agree with all teams listed; one thing about Hendrick trace’s back to loss of experience and knowledge. Most analysis underestimates the brain drain that began with Stewart Haas leaving the hendrick alliance. Once SHR announced they were leaving chevy we saw both overall team’s performance decline. Johnson still won championship because the entire hendrick organization was behind him. Hendrick lost knowledge/input from Harvick, Busch, and Stewart. That’s huge 3 champion drivers, and a major drop in engineering data and knowledge from a top organization. The hendrick team hasn’t recovered since then. On top of that they lost 3 other veteran drivers with years of experience and notes; Earnhardt jr, gordon, and kane. Hendrick lost input of 6 top tier (at one time) drivers over a few seasons. It took decades to gain that knowledge, they are playing catch up and hopefully will cycle back.
Look at the difference it has made at SHR and Ford. SHR with 4 solid experienced drivers -with tons of experience and notes. The ford alliance has helped both SHR and Penske, and the lower tier teams. Roush still recovering from losing Edwards, kenseth, biffle.

I generally agree with your post, however I submit that it is more likely that the Ford camp was helped more by the knowledge they gained by assimilating SHR and Penske than by whatever the drivers brought to the table. After all whether we like to admit it a race car is merely a machine, subject to the laws of physics just like anything else. So my guess is that the ideas they brought with them dramatically reduced the learning curve for Ford.