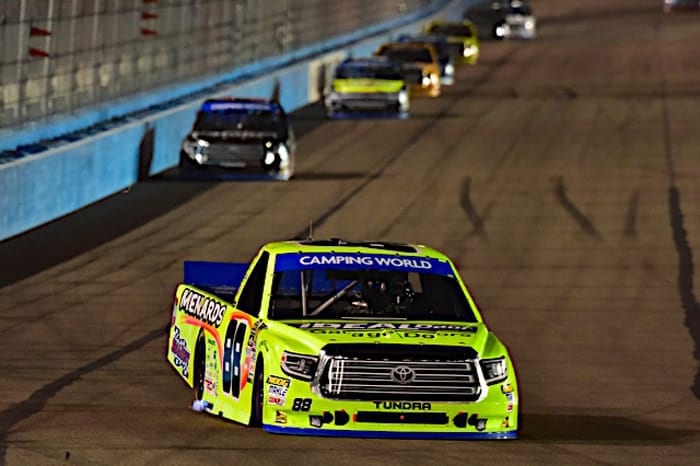 This video has to be one of my favorites from recent years. Here you have Norm Benning who, despite having very limited funding, spent each week plugging along multiple laps down. But as the series hit Eldora Speedway for the first time, a miracle happened for the small team. Racing in the last chance qualifier, Benning had a shot at transferring to the feature when the white flag flew, even if Clay Greenfield was set to put up a fight for that final spot. A substantial amount of beating and banging saw the two bounce off of each other and the wall before Benning emerged with the final transfer spot.

But it wasn’t over yet. The damage from the contact throughout the final laps put the No. 6 truck in a state of disrepair that threatened his chances to even start the feature. Enter the NASCAR family; drivers and crew members from multiple teams pitched in to help Benning make repairs to his truck. He ultimately finished 26th, four laps down, but it was the kind of feelgood story that lasts even nearly five years later.

While the video quality isn’t the greatest, you can still get the feel for this finish and how incredibly close it was. After leading just 25 laps, Erik Darnell held on for his second career win in what turned out the to be a 0.005-second margin over Johnny Benson. And if that wasn’t enough, you can also see the three-wide battle for third, fourth and fifth as the checkered flag flew. By the time the end of the 2008 season, which was also his last one in the series, came around, Darnell was fourth in the championship standings.

Ask any NASCAR fan who’s been following the sport since at least the 2011 season their thoughts about the incident between Kyle Busch and Ron Hornaday at Texas Motor Speedway that year, and you’re sure to get a wide range of thoughts on it. Barely 20 laps into the event, the duo battled for position as they approached a slower truck in the low lane. Trying to avoid contact, Hornaday did clip the slower truck and slid up into Busch, sending both trucks into the wall, effectively ending both drivers’ hopes for a trip to Victory Lane.

Clearly upset about the damage done to his truck, Busch drove up on Hornaday’s back bumper and ultimately dumped him into the wall. The contact was hard enough to lift the back end of the No. 33 off the track. While Hornaday was uninjured, NASCAR didn’t take too kindly to Busch’s intentional wreck under caution and parked him for the remainder of the weekend. The incident remains as one of the reasons people who dislike Busch refer to.

Photo Finish at Colorado Speedway in 1995

Looking all the way back to the inaugural Truck Series season, you find this battle between Butch Miller and Mike Skinner. While NASCAR didn’t use electronic scoring then, many maintain this finish is the closest in series history at an estimated 0.001 seconds. It also serves as a stark reminder that the Truck Series was built for short track racing.

Just last season, Timothy Peters suffered a terrifying wreck on the final lap at Texas Motor Speedway. Austin Wayne Self got loose and spun toward the inside lane, clipping Peters and sending him spinning through the grass. While sliding sideways, the No. 99 truck dug into the grass and rolled, but Peters ultimately walked away uninjured. Meanwhile, Christopher Bell and Chase Briscoe battled to the checkered flag, and while the official margin of victory is listed as under caution, it was Bell who won by mere inches.