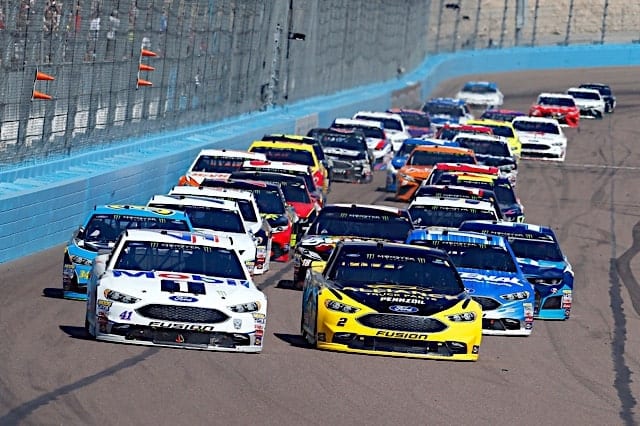 NASCAR released its new schedule for the 2019 season on Tuesday (April 3), and I say the word “new” so loosely that it has most crew chiefs calling for a couple major turns of wedge.

The term copy-and-paste is much more applicable to what we are getting next season, as it is nearly identical to what we have this year, to many fans’ chagrin. I wonder if the powers that be in NASCAR are mad at Easter and the days of the week for changing dates every year, as that is only thing different about next year’s schedule.

Anyone that knows anything about racing (I’m sure you readers can tell me who that excludes) seems to want more short tracks on the schedule, many want more road courses, and we all want less cookie-cutter intermediate tracks. Guess what? We’re not getting any of that.

Many fans are angry about this — I am too — but anger isn’t going to change anything. Due to the conflict of interest of the France family owning majority of International Speedway Corporation and the butt-kissing of Bruton Smith and his Speedway Motorsports Inc., NASCAR is locked into agreements with the current tracks through 2020. That means we are stuck with the current schedule for the rest of this year and the two following seasons.

NASCAR has its hands tied on this matter, but there are two things it can do in the meantime to make our current schedule interesting again.

Michigan International Speedway, Charlotte Motor Speedway and Atlanta Motor Speedway have all been on the schedule since the 1960s. They would not have lasted this long if the tracks completely sucked. There used to be good racing at these tracks.

Then NASCAR came out with aero package after aero package that give the lead car a huge advantage over the rest of the field. With these aero packages came higher speeds that have climbed to 200 mph (and up) at the larger tracks. This has led to races where the field gets spread out and passing is at a minimum. It hurts the larger tracks the most, and that is why fans have come to hate everything that is not a short track, road course or restrictor plate track.

If NASCAR’s goal with the aero packages since the Car of Tomorrow was to have a bunch of races where the cars run so single-file that they look like the Macy’s Thanksgiving Parade, then mission accomplished.

I recently looked back at footage of the 1992 Hooters 500 at Atlanta, which is one of the greatest races of all time. In addition to the numerous storylines, the racing was just as great. On restarts, the cars would fan out to three-wide, sometimes four-wide, and it would be a passing frenzy for the next 10 laps. Even after the cars settled in, it seemed like there were passes for position somewhere on the track every lap. One driver would get up to the front and lead for a little bit before someone else would track them down and pass them.

And the cars raced so much closer to each other without having to worry about taking the air off of someone else’s spoiler and wadding up the field. The cars in that race were only reaching 180 mph, but the race seemed so much more compelling.

At Speedweeks this year, I asked NASCAR Hall of Famer Bobby Allison if he thought the cars were going too fast now. The introduction of restrictor plates came from Allison’s wreck at Talladega Superspeedway where he blew a tire at over 215 mph and went airborne. Allison said that restrictor plates were underrated because they greatly improved the racing. He said that by slowing the cars down, drivers are a little less scared to make moves.

Restrictor plates wouldn’t be the answer at intermediate tracks, but making the cars less aerodynamic would. Doing so would slow the cars down, and the result would be less aero-dependent cars and better racing. So let’s make a huge step in this direction by getting rid of splitters.

The removal of the splitter would be a win-win; it would slow the cars down a tad, and it would also make the cars tougher. The drivers would be able to make more aggressive moves without the splitter, because they wouldn’t have to worry about losing all aero-dependence by getting a hole in it. Moves like the Pass in the Grass at Charlotte could never have happened with a splitter because Bill Elliott would have sustained damage to his when he bumped Dale Earnhardt and the No. 3 would have been shredded when it hit the grass.

NASCAR owes it to the intermediate tracks to try to improve the racing before pulling the plug on them, so let’s have a splitter-burning party and come up with other ways to slow the cars down in the process.

NASCAR found a very interesting loophole to its track agreements when it announced it would race at the Charlotte roval instead of the traditional oval race this fall. The roval is not going to be a good race, but it could lead the way to other tracks on the tour changing their configurations.

Chicagoland Speedway might be the most boring track on the schedule; there have been more Chicago Cubs championships in the last 17 years than good races at the track. What if ISC tore down the current track and rebuilt it as a short track? That’s a move that would generate some buzz and make the race exciting. The same should happen at Kentucky Speedway and maybe others.

ISC just spent $178 million moving the finish line at ISM Raceway from one side of the track to the other — something nobody cares about. The organization should be willing to spend even more if it means making a track better.

In 1988, Richmond Raceway reconfigured from a half-mile track to its current 0.75-mile shape between race dates. The ground broke on the construction right after the spring race ended, and it was ready by the fall. Chicagoland and Kentucky have one race a year, so NASCAR has no excuse as to why it can’t reconfigure those tracks before the 2019 races at them.

The Camping World Truck Series has two races scheduled at Las Vegas Motor Speedway this year when that series has no business racing there twice. Let’s instead move one of the dates to the dirt track on the LVMS grounds. The K&N Pro Series West is racing on the Las Vegas dirt track this season, and I bet it will be a fun race. If it works for those two series, then Cup should try it one day.

And while I’m throwing out ideas that the NASCAR brass won’t in the least bit consider, how about this: let’s go backward on a track. Wouldn’t it be exciting if the Cup Series ran one race, just one race, where the cars went around a track in the opposite direction — so instead of turning left, the drivers turned right? This is NASCAR, not golf. It’s supposed to be quirky, boundary-breaking and fun.

My ideas may not be perfect, but with the staleness of the current schedule, I don’t see how any of those suggestions could hurt. We’re stuck with the current tracks on the schedule for the time being so we might as well throw everything but the kitchen sink at them to try to make them exciting.

yeah what he said

Nothing at all will change

You know they won’t, like “What’s Wrong With Johnson?”

Maybe this, and all similar articles, says everything you need to know about the modern nascar. There is nothing to write about with the racing, only fantasy schedules, and the announcement that Acme Motorsports just got a one race sponsorship with Clem’s Restaurant and Car Wash.

How about jumps! No, no…how bout spike strips! No. How about rings of fire! Alligators in the infield!

oh well, it’s better than no racing at all. DROP THE RAG!

I can’t see complaining about next year’s schedule when big changes we made for this season. Even when the sanctioning agreements are up, NASCAR not going to up and move Cup races to bullrings around the country. Many of the tracks we talk about going to/or going back to lack the necessary infrastructure. Improving the schedule will be a long slog with changes coming incrementally. I agree with the notion of reconfiguring certain tracks, especially Chicago.