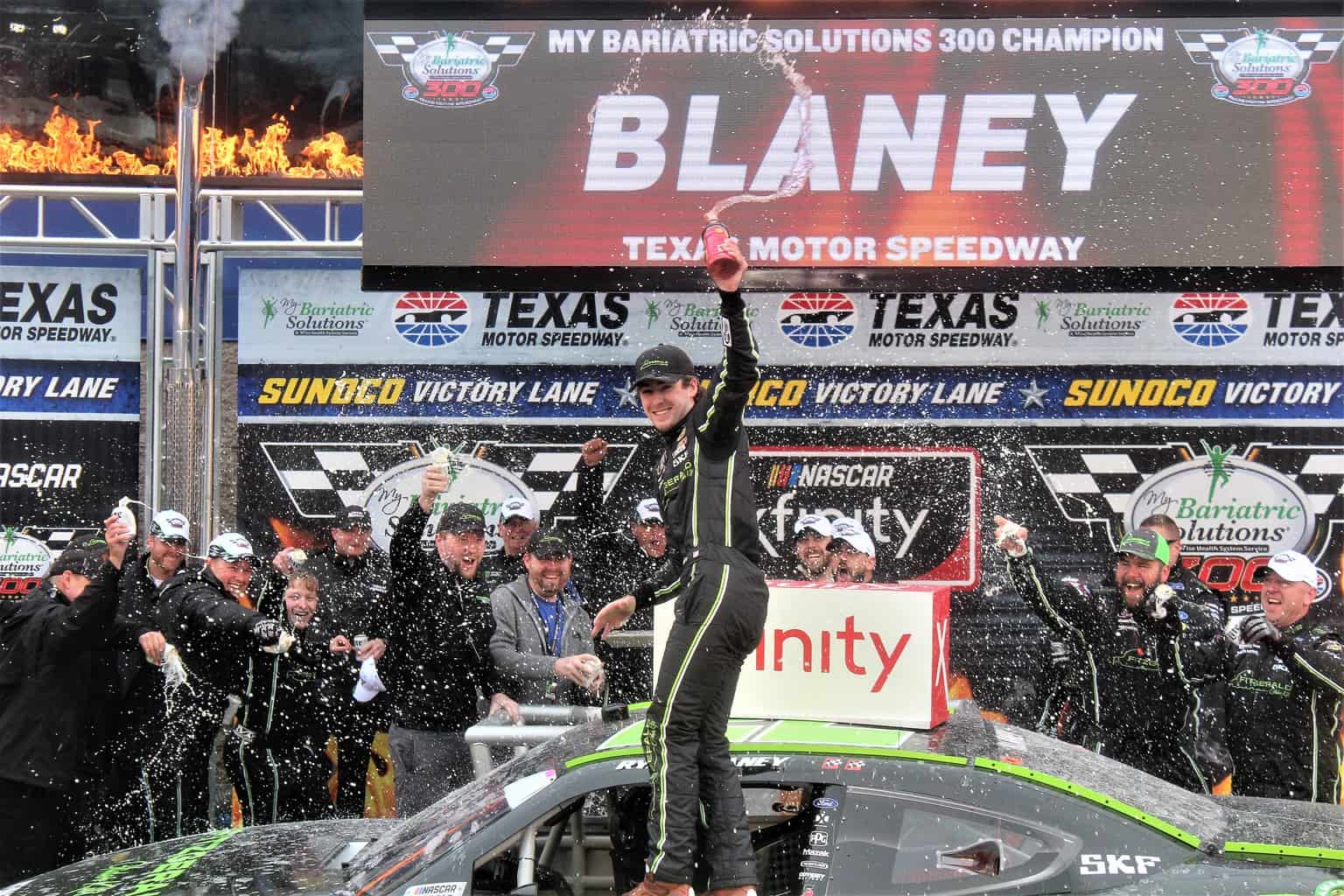 “That is three in a row for this team with three different drivers,” said Blaney. “That says a lot about Brian’s (Wilson, crew chief) work that he has done and the whole team to bring fast race cars to the tracks lately. Hopefully, we can keep this up. It was definitely a fun day.”

You're awesome at this Ryan @Blaney … pic.twitter.com/VAaNZoc17g

The driver of the No. 22 started on the pole as a result of qualifying being cancelled following the first round due to a persistent mist in the area. He led three times for a race-high 132 of 200 laps, including the first 75 and the last 47.

Matt Tifft, who also started at the rear of the field when his car failed to make it through pre-qualifying inspection, wound up sixth. Meanwhile, Jamie McMurray, who spun early to bring out the second caution, rebounded to seventh.

Elliott Sadler, another driver whose car didn’t make it through pre-qualifying inspection in time, finished eighth. Austin Cindric and Spencer Gallagher rounded out the top 10.

The race was slowed a total of eight times for cautions, including three single-car spins within the first 20 laps. Chad Finchum, McMurray and Vinnie Miller all spun during that timeframe, though Miller was the only one unable to continue as he suffered extensive rear end damage.

This race also set the field for the first Dash 4 Cash race next weekend at Bristol Motor Speedway. Bell, Hemric, Custer and Preece will compete for $100,000 in a race where drivers who have declared for Cup points will not be permitted to compete.

Sadler remains the point leader by 11 markers over teammate Tyler Reddick, who suffered three pit road speeding penalties and finished 23rd. Bell and Hemric each jumped a position to third and fourth, respectively. Justin Allgaier, who suffered a motor failure and retired early to a 35th-place finish, dropped two spots and rounds out the top five.

Loading up Allgaier's car. His day is done after struggling with motor problems. #NASCAR pic.twitter.com/kSNnz8pQky

The XFINITY Series heads to Bristol next Saturday, April 14. Coverage for the Fitzgerald Glider Kits 300 begins at 1 p.m. ET on FOX Sports 1.

REALLY…….. WAS THIS A SURPRISE AT ALL, Ryan Blaney Smokes the Field in Texas XFINITY Race

This is the SAME story week after week in the Xfinity Race, It’s just which CUP DRIVER is going to take the

Trophy from the Xfinity Regulars

SO SAD THESE YOUNGER DRIVERS DON’T STAND A CHANCE WITH THESE CUP DRIVERS DOUBLE DIPPING….

Its not the cup drivers that are the problem its the cup teams sending their JV’s to the junior series.

won. In fact, full-time Cup Series drivers have now each of the last five Xfinity Series race, and a different

Cup Series driver has won each of those races.

Since then, Kevin Harvick, Kyle Larson, Brad Keselowski, Joey Logano and now Blaney have won in the

I guess the only difference this week is no mention of any fake adversity that the Cup driver had to overcome in winning the JV race.

ARCA and the old pro cup north/south shootout at Nashville Fairgrounds was awesome. It was eff’n freezing but awesome. Real track and real race car drivers. There was a race at Texas Saturday?