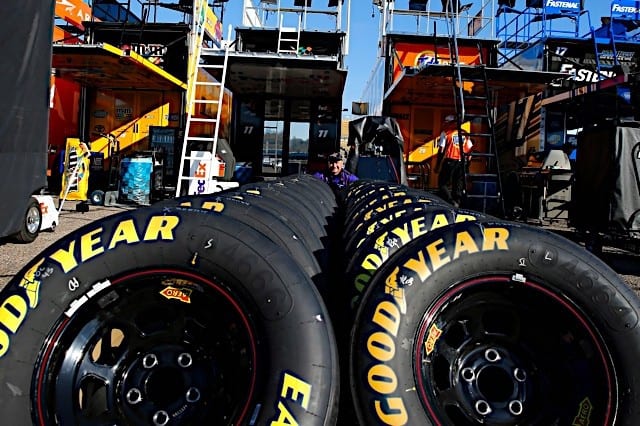 Kyle Busch may have edged Kevin Harvick to finally get that winless monkey off his back, but Sunday’s (April 8) race at Texas Motor Speedway for the MENCS was more notable for who wasn’t around at the finish.

Kyle Larson. Martin Truex Jr. Ryan Newman. Ricky Stenhouse Jr. Each of them were victims of tire failure that left their cars a mangled mess sitting in the garage.

Faulty Goodyears were a fiery source of conversation after a race whose eight caution flags tied a season high. Focus swirled around NASCAR’s new mandated air guns that crew chiefs felt caused loose wheels. At least a quarter of the field made green-flag stops for the problem which Harvick’s crew chief Rodney Childers called out on national television.

“At some point, we have to get these guns better,” Childers said. “I’m tired of biting my lip.”

Others, from NASCAR crewmen to car owners, jumped on the bandwagon.

Joe Gibbs says he's "taken a stand" on the pit guns and is unhappy with the current state of them.

But new air guns don’t add up to a Texas-sized problem. Sure, it’s been an issue all season but we didn’t see a dozen cars wreck at Fontana, did we?

Seems like the blazing pace on the new asphalt also took its toll on cars and setups pushing the limit on speed. The faster you go, the greater risk you have in racing and it’s clear TMS left drivers running the ragged edge. The day’s big wreck, caused when Denny Hamlin lost control was caused by a track and cars whose instability left sustained side-by-side racing near impossible.

Either way, the tire drama injected some unpredictability into a sport whose early results grew stale. TMS was easily the third-best race after Daytona and Phoenix, a bounce back off week performance. Improving the air guns needs to be on the agenda but, as we’ve seen, perfection in the forms of bodies, setups and handling leads to the type of racing few want to see.

Does NASCAR need to fix the air guns? Sure. But it’s nice to see the season with a breath of fresh air. Kudos to the TMS repave, which between this drama and Harvick’s late-race pass in November has somehow kept fans entertained while killing their multiple grooves in the process. Tom Bowles

Ryan Blaney added his name to the list of winners this season by dominating at Texas, leading 132 of 200 laps. Team Penske has won the last three XFINITY races, dating back to last month’s contest at ISM Raceway.

Despite a dominating performance from Blaney, he had to work for it in the second stage. He led every lap in the opening stage. But a trio of cautions in stage two, with one coming in the final laps, shuffled the running order, resulting in an 18th-place finish. Brandon Jones won the stage, the first of his career.

So cool to win on the same day my pops! Dad won at Port Royal about 30 minutes after our Texas win. Was a fun phone call afterwards. Here’s to tomorrow. pic.twitter.com/BeRepcVpqT

Christopher Bell finished second for the second time this season. Daniel Hemric led a career-high 39 laps before finishing third, with Cole Custer and Ryan Preece rounding out the top five.

When the caution flag waved with 21 laps to go in the Desert Diamond Phoenix Grand Prix, Josef Newgarden decided to pit for new Firestones, while the Schmidt Peterson Motorsports duo of Robert Wickens and James Hinchcliffe stayed out.

What a race.
What a team.

Wickens led the field on the restart with eight to go, and Newgarden restarted from fourth. However, it took Newgarden only three and a half laps to overtake Wickens for the lead.

Will Power led a race-high 80 laps, but contact with the Turn 2 wall just past the halfway point ended his night. He wound up 22nd, completing 153 of 250 laps.

Sports Cars: Toyota Destroys Field in WEC Prologue…Or Did They?

Last weekend was the WEC Prologue at Circuit Paul Ricard in France, the first chance that the public gets to see the new cars for the 2018-19 “Super Series.” This year will see Toyota GAZOO Racing take on a series of LMP1 privateers. If you look at the results, it doesn’t look like a contest at the moment.

However, Toyota was testing a new cooling system on Friday and chose to run their cars unrestricted in order to sort it out.  They won’t be running unrestricted this season. There will be an “Equivalence of Technology” (EoT) setup that will effectively equalize the Toyotas with the non-Hybrids. Once the cooling system was worked out, the Toyotas reverted to the rules they’ll be running this year. Their times under the EoT rules were much slower. In fact, none of the times set by either Toyota after the seventh hour were under 98 seconds.  Petrov’s best time was 97.034 seconds (133.487 mph).

In GTE-Pro, Porsche GT Team’s Gianmaria Bruni was fastest with a lap of 111.332 seconds (116.344 mph), a half-second faster than teammate Kevin Estre in the No. 92 Porsche. Harry Tincknell in the No. 67 Ford was third. GTE-Am saw Dempsey-Proton Racing’s Matteo Cairoli fastest with a lap of 112.936 seconds (114.692 mph), good for fifth out of all GTE entries. Cairoli was two-tenths of a second faster than Gulf Racing UK’s Ben Barker, followed by Matt Campbell in the No. 77 Dempsey-Proton Porsche.

The test was 30 hours in length, but only a couple of teams took advantage of the full length. Aston Martin Racing designated their new No. 95 Vantage as the mule and turned in the most laps during the test (852).

The 2018-19 FIA World Endurance Championship begins on May 5 with the 6 Hours of Spa-Francochamps in Belgium. It will be the first of two visits to the storied Belgian circuit during the upcoming season. Phil Allaway

The first western four-wide race is in the books with the completion of the DENSO Spark Plugs NHRA Four-Wide Nationals from The Stip at Las Vegas Motor Speedway. The event was a hit, boasting sellout crowds on both Saturday and again for eliminations on Sunday.

In Top Fuel, it was Steve Torrence who notched the win with a 3.771 second run at 326.63 mph to come out on top of a quad that also featured Tony Schumacher, Antron Brown and Doug Kalitta.

“I knew my team was confident coming into today but going into a final round against Antron [Brown], Tony Schumacher and Doug [Kalitta] up against you makes it a tough round,” Torrence said. “Our car still isn’t performing at the level it was last year, but we know we just have to work on the car and prepare for the later part of this season when every race really matters.”

Funny Car featured a final four that included number one qualifier Courtney Force, Tommy Johnson, Jr., Jack Beckman and J.R. Todd. Give it to Todd who’s 4.041 second, 317.05 mph run was the best of the four and beat out Beckman, Force and Johnson, who redlit, in that order.

Vincent Nobile prevailed for the win in Pro Stock, his first win since Maple Grove in 2016. He faced off against Chris McGaha, Deric Kramer and Bo Butner. McGaha tripped the red light while Nobile put down a run at 6.591 seconds, 210.44 mph to beat Kramer and Butner.

“My team worked their tails off this weekend, we went through three engines but overall it was a great weekend and there isn’t any reason we can’t be back in the winner’s circle again soon,” said Nobile. Toni Montgomery

Though he didn’t end up winning the pole, Zane Smith emerged from qualifying as ready to race as anyone in the field, exclaiming repeatedly over the radio that the team’s adjustments from practice had made a “night and day” difference.

Going from day to night did suit the No. 41 team just fine as Smith ran in the top five and took the race lead by halfway. Though Sheldon Creed managed to steal the lead from Smith on the race’s final restart on lap 168 after a debris caution (a legitimate one, the metal on the track was visible to the naked eye from the stands), Smith surged back to the front on lap 180 and never looked back, scoring his first career ARCA Racing Series win.