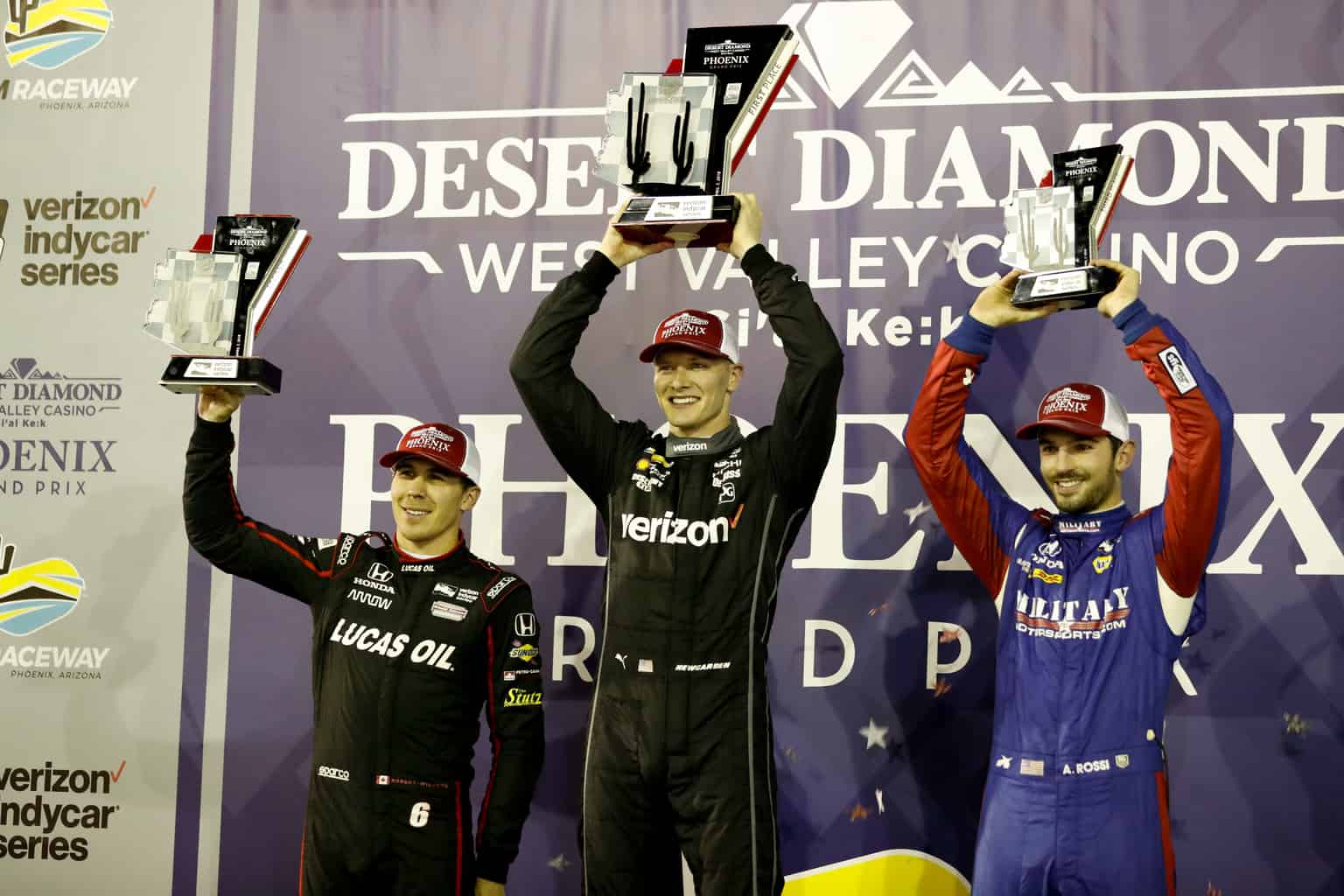 When the caution flag waved with 21 laps to go in the Desert Diamond Phoenix Grand Prix, Josef Newgarden decided that fresh tires would give him a better chance at winning.

The Schmidt Peterson Motorsports drivers, James Hinchcliffe and Robert Wickens, chose to stay out on older tires. Wickens led the field on the ensuing restart, followed by his teammate, Alexander Rossi, and Newgarden.

Newgarden, the 2017 IndyCar Series champion, flew to the outside and passed Rossi and Hinchcliffe with eight to go. On Lap 247 of 250, he made the winning move by overtaking Wickens on the outside groove of Turn 2.

Although Wickens was a dominant force throughout the race, he finished second. Rossi, who endured a drive-through penalty after his first pit stop, finished third.

Wickens led a majority of the season opener in St. Petersburg last month but suffered a late spin after contact with Rossi. Saturday night’s event at ISM Raceway was his first ever race on an oval, and he looked like a veteran.

“Even leading races, you can’t ever expect that as a rookie,” he said. “Our pace was really strong tonight. … But there was no stopping (Newgarden). Once he built up the courage to go outside, it was pretty easy.”

Wickens spent much of his twenties climbing the Formula One ladder and raced in the German DTM series last year. It appears the Canadian has found a comfortable place in American open-wheel competition at age 29.

“He’s a stud,” Newgarden said after the victory. “Robert has been one of the best drivers in the world for years. He probably should have been in IndyCar a lot sooner. He’s one of the best out of Canada in the last 10 years, in my opinion.

“He’s proved his worth, and I think he’s gotten here at a great time with the new car. … The rookies seem to be shining, and Robert is very capable.”

“I’m a bit disappointed not to finish P2 tonight,” Hunter-Reay said. “I think we had the car to do that. We had some issues pitting. … It was exciting at the end; I just wish we could have gone green a little sooner.”

Pole sitter and St. Pete winner Sebastien Bourdais made an error as he entered his pit box during the first round of stops. He hit one of his tire changers with the left front wheel and then had to serve a drive-through penalty. He finished one lap down in 13th.

Overall, it was still difficult to complete passes, but not as severe as it’s been the last two years. The new aero package and tire fall-off helped save the race from being a high-speed parade.

“It was definitely a challenging race to find what you needed from the car,” Newgarden said. “There were moments when you got stuck. For me, I couldn’t attack as much as I wanted. I had top-five speed, but my attacking ability was low tonight.”

The series visits the streets of Long Beach (Calif.) next weekend. Newgarden leads the standings by three points over Rossi with Bourdais two behind him in third.

Another great Indy Car race.
Leigh Diffey is so annoying.
I don’t get these race penalties that eliminate you winning. Hitting your crewman doesn’t improve your position on the track. It actually costs you positions on the track. Why not just fine them for the infractions that doesn’t improve their positions. Drive-Thru penalties, that do improve your positions, for instance speeding on pit road and passing under the yellow flag.