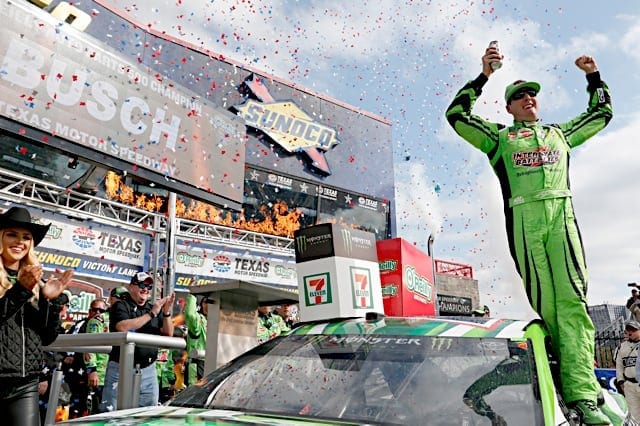 The Monster Energy NASCAR Cup Series flipped the script Sunday (Apr. 8) at Texas Motor Speedway. The final 23 laps of the O’Reilly Auto Parts 500 saw a heads-up battle for the win between Kyle Busch and Kevin Harvick. The two led 203 of 334 laps and were on even tires for the run to the finish.

But unlike last November, when Harvick caught and passed Martin Truex Jr., there was no last-lap drama up front. Busch had enough juice to keep the lead and hang on for the victory at TMS. The win, his first of 2018 following four straight top-three finishes, was also his third at Texas and 44th of his MENCS career.

“[Harvick] was probably a tick faster overall,” Busch said. “I just had to make sure I hit all my marks to block his air a little bit.”

It’s sweet redemption for Busch at a facility that has also been home to some of his worst moments. In November 2011, he earned a suspension for a Camping World Truck Series in-race wreck with Ron Hornaday Jr.

“It feels awesome,” he continued. “Any time you can win at a track that isn’t one of your favorites or your bests, it means even more. You try to focus on those tracks to make it more meaningful to get it done.”

The win was also the first for Joe Gibbs Racing and second overall for Toyota in 2018. After a strong start for Fords, Camrys are playing catchup but appear to be making gains in recent races.

“This has been a trying couple of months,” added Busch. “After Daytona, we’ve been on a roll of finishing well. I’ve been pumped and excited about that but frustrated at the same time trying to get to Victory Lane.”

Second-place Harvick was arguably the comeback driver of the day, surging to the front after suffering multiple pit road issues with his No. 4 Stewart-Haas Racing crew. The three-time winner this year was no ‘Happy’ Harvick after the constant penalties.

“We had a pathetic day on pit road, and two days because of pit guns,” he explained. “Today, we didn’t overcome it. Time after time, you cant get the lug nuts tight because the pit guns don’t work.”

Crew chief Rodney Childers also spoke up on live TV about the air guns, part of a tire epidemic that plagued the MENCS race. Over a quarter of the field pitted under green for loose wheels while several tire failures led to spectacular crashes.

That made staying clean crucial Sunday, as attrition was at its highest since February’s Daytona 500. The first yellow came early when Alex Bowman spun and collected Daniel Suarez and Paul Menard on Lap 3. Later, Truex blew a tire and crashed out on Lap 82 while Kyle Larson saw a similar fate on Lap 128.

“I have to thank NASCAR and their safety [innovations] because that was a pretty hard hit there,” Larson said. “Didn’t expect to blow a right front.”

The carnage didn’t end in Stage 2, either. The race’s final segment kicked off with a seven-car wreck in Turn 3 when Denny Hamlin spun. The troubled No. 11 collected Jimmie Johnson, Aric Almirola and Brad Keselowski.

“I shouldn’t have been in that position,” said Hamlin. “The No. 18 was falling back, the No. 10 made a move to the inside. Everyone is fighting for the bottom. The No. 10 was trying to squeeze, I got out of the gas, got loose. It’s my responsibility to keep my car underneath me, but it’s such tight corners that it’s nearly impossible to do.”

While Childers blamed the air guns, others blamed the asphalt or even the cars themselves. Keselowski in particular pointed the finger at aerodynamics and faster speeds that have plagued TMS since their repave last season.

“The cars, when you get side-by-side, they just aren’t meant to run that way,” he said. “They just wrecked in front of us. I picked the wrong direction.”

The eight yellows, which tied a MENCS season high pushed a few surprise names to the forefront. Jamie McMurray scored his first top-five finish of the year in third while Erik Jones stayed out of trouble to run fourth after leading 64 laps.

“We’ve been inching there each week, getting closer and closer,” Jones said. “Martinsville is its own animal but on the 1.5- and 2-mile [tracks] we have been getting better. “You always learn something racing Kyle [Busch] or [Kevin] Harvick, guys of that caliber, they’re really fast.”