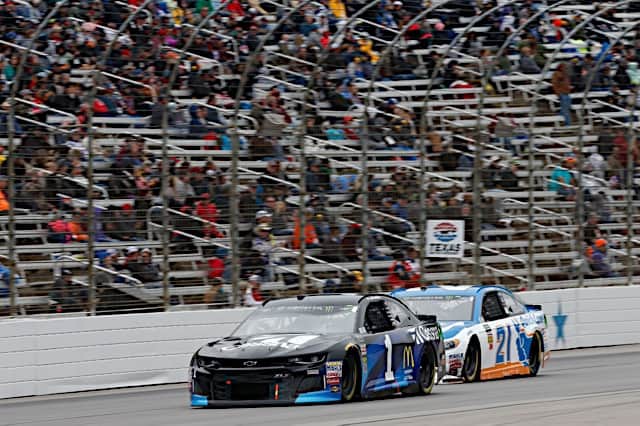 Up until Sunday’s Monster Energy Series race at Texas Motor Speedway, Jamie McMurray’s 2018 season had been one disastrous race after another. His teammate, Kyle Larson, had enjoyed mostly good results this year, managing to avoid major trouble in any of the first six races.

But in the Lone Star State, Chip Ganassi’s drivers found their 2018 roles reversed. Larson crashed on lap 127 while running in the top five. A blown tire appeared to trigger the accident, ending Larson’s day with a 36th-place finish.

McMurray, on the other hand, survived a race that turned into a war of attrition as the afternoon wore on. Good pit stops and quick restarts kept McMurray in the hunt, and he took the checkered flag in third place, the first time this season that he has finished in the top 15.

Unfortunately for McMurray, he is having the weakest start to any of his seasons in quite some time.

Proud of our team effort today. Good pit stops, missed the wrecks, and we had pretty good long run speed in our @Cessna Chevy. Solid day all around and happy to bring it home third.

Yet, McMurray is not the only Ganassi driver who has not started 2018 with the same pace as the previous year.

In 2017, a victory in the Daytona 500 slipped out of Larson’s reach when his fuel tank ran dry on the final lap. The No. 42 team then proceeded to finish in second for three races in a row before Larson broke through at Auto Club Speedway. Larson held the championship lead through race seven at Texas, serving notice that he would be one of the season’s drivers to beat.

One year later, Larson looks more like he did at the end of 2017 – fast but inconsistent.

After early crash damage hampered him in the Great American Race, Larson reeled off three top 10s in the next four races. Curiously, the one finish outside the top 10 came at ISM Raceway, where Larson dominated early but spun out on lap 122 and never fully recovered. But a lackluster performance at Martinsville Speedway, followed by Sunday’s crash, finds Larson 11th in the playoff standings.

Unlike last year, when both CGR drivers started off strong, Larson’s and McMurray’s teams have encountered different challenges this year. All of the Chevrolet teams have faced a learning curve with the new Camaro body, but Larson’s team, along with the No. 9 of Chase Elliott at Hendrick Motorsports, seem to be getting the most speed out of the car on the intermediate tracks. The No. 42 and No. 1 have both struggled to close out races, but Larson and company have at least found a better formula for getting their cars to the front.

One car with speed is certainly better than no cars with speed. But the Ganassi organization has been unique this year because its teams have produced dissimilar results. For instance, compare Ganassi to Stewart-Haas Racing, which has all four of its drivers in playoff contention.

Team Penske has yet to win a points-paying Cup Series race in 2018, but its three drivers have been regular contenders for top 10s almost everywhere. Joe Gibbs Racing grabbed its first victory of the year on Sunday and has performed generally well, though, Daniel Suarez continues to have a rough season. Austin Dillon has scored a win for Richard Childress Racing, while Ryan Newman has not, but the two drivers are only separated by 14 points.

Meanwhile, the teams that have struggled in 2018 have all produced more similar results than Ganassi’s teams as well. While Elliott has been the fastest of the Hendrick quartet, all four drivers find themselves within 23 points of the playoff cut line in either direction.

Front Row Motorsports teammates Michael McDowell and David Ragan are separated by just 22 points, while the gap for JTG Daugherty’s AJ Allmendinger and Chris Buescher is only five points.  And while Ricky Stenhouse Jr. came very close on Sunday, neither he nor Trevor Bayne have posted a top 10 for Roush Fenway Racing this year.

With McMurray an even 80 points behind Larson, CGR has one driver who is likely heading for the playoffs and one driver who may struggle to get there. More experience with the Camaro body should help McMurray’s team as the season progresses. However, in the short term, Ganassi’s best strategy could be as simple as going for wins over good points days.

Larson has not been to victory lane since he won at Richmond Raceway last September. Nearly half a season’s worth of races has passed since then.

If the No. 42 team can just snag a win somewhere, it will all but lock up Larson’s spot in the playoffs and give the team a chance to solve its consistency problems before the postseason begins. With trips to Bristol Motor Speedway and Richmond coming up soon, Larson will have a few good chances to win before April ends.

As for McMurray, winning might be his only option to reach the playoffs. Though he has three consecutive playoff appearances, McMurray has not won a points-paying race since 2013. The No. 1 team has been able to reach the postseason the last few years on points earned through strong starts.  In 2018, McMurray will not have that luxury, and he might not be able to wait around for the Chevy to improve. Winning would instantly change his post-season prospects.

But if Larson still struggles to close out races, or starts running more like McMurray, then both drivers could be in for another year with disappointing postseason results.  The next few races could reveal which direction Ganassi’s team goes.