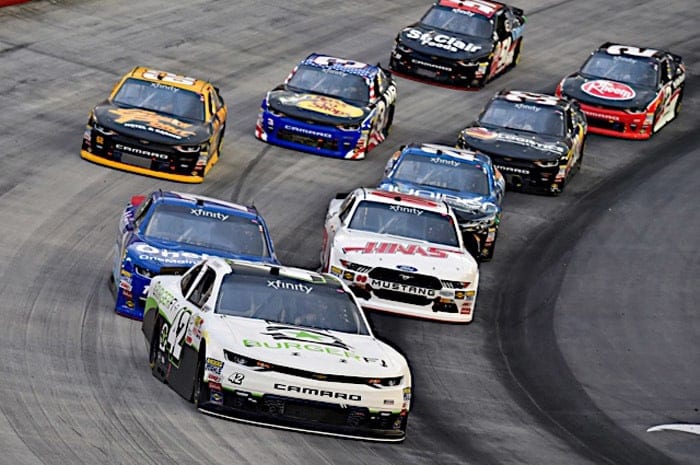 The NASCAR Xfinity Series heads to the Bristol Motor Speedway this weekend for the first short track event of the season.  41 cars make up this week’s entry list, meaning one car will go home and not race on Saturday afternoon.  This is also a Dash for Cash race, so there will not be any Cup drivers entered in this weekend’s race.

Two young guns will make their series debuts this weekend, Shane Lee in the No. 3 car for Richard Childress Racing and Tony Mrakovich in the No. 28 car for JGL Racing.  Lee ran full time in the ARCA Racing Series last season for Cunningham Motorsports, finishing 3rd in points. Mrakovich is an Elizabethtown, Pennsylvania native who has two career ARCA Racing Series starts.

Austin Cindric will be behind the wheel of the No. 22 car for Team Penske after driving the No. 12 car for them this past weekend at Texas Motor Speedway.

John Hunter Nemechek will be back in the No. 42 car for Chip Ganassi Racing this weekend for his third race of the season.

Ty Majeski will make his season debut in the No. 60 for Roush-Fenway Racing.  Majeski has not raced since the season finale last season at the Homestead-Miami Speedway where he picked up his first career top 10 finish, finishing 10th.

Chase Briscoe will take the wheel of the No. 98 car for Biagi-DenBeste Racing after Kevin Harvick drove the car this past weekend.  This will be Briscoe’s second consecutive start, and his third overall start of the year.  He has a best finish of 11th in his two races so far, that coming at the last race at Texas Motor Speedway.