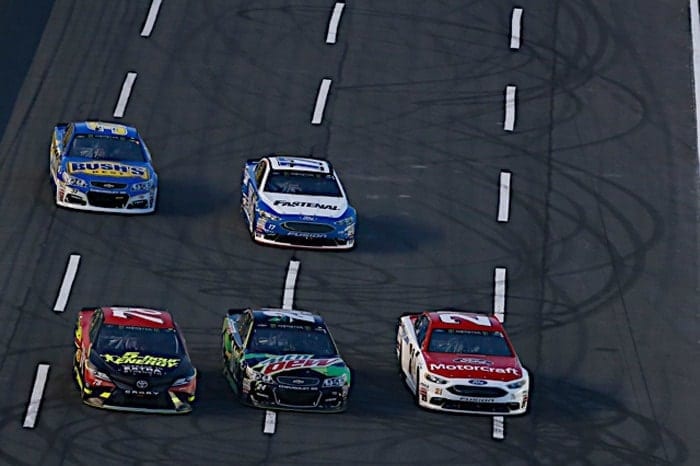 On Wednesday (April 11, 2018) Charlotte Motor Speedway and NASCAR released the format for the 2018 Monster Energy NASCAR Cup Series All-Star Race on May 19. Like always, teams will compete for a $1 million purse. However the new format brings change to both the cars, and the stage race format, all in hopes of tightening the competition.

The first major change is that the teams will run with restrictor plates on the motors to reduce the horsepower, like they do at Daytona and Talladega. The All-Star race will mark the first time that MENCS will feature restrictor plate engines at Charlotte.

The aero changes include the use of a splitter from the 2014 rules package with a 2018 radiator pan, along with a six-inch tall spoiler with two  12 inch long “ear” extensions. The cars will also feature manufacturer-specific air ducts that should minimize the advantage that the lead car has over the rest of the pack in dirty air.

The aero changes were inspired by the package presented in the 2017 NASCAR XFinity Series race at Indianapolis Motor Speedway. A race that brought a record number of lead changes and received much positive feedback from fans. The XFINITY Series will run a similar rules package for the races at Pocono (June 2), Michigan (June 9), and again at Indianapolis (September 8th).

“NASCAR is committed to innovation and will always work to improve the racing product for every series and venue,” Steve O’Donnell, NASCAR executive vice president and chief racing development officer told NASCAR.com. “The yearly Monster Energy NASCAR All-Star Race is an opportunity to see your favorite drivers compete under a unique and exciting format and rules package. The positive feedback following last year’s Xfinity Series race at Indianapolis gave us the foundation to implement this dynamic package for the All-Star Race. We believe the hard work of the entire industry will provide the best race for our passionate fans.”

The format also brings change to the structure of the stage racing. The race will be broken down into four stages. Stage one will be 30 laps, stage two and three are both 20 laps, and the final stage will be a 10-lap dash. There will be 10 laps added to the overall race distance from 2017. Only green flag laps will be counted in the final stage. The most noteworthy change being that all stages will feature Overtime rules if necessary to the finish.

“The All-Star Race has a long history of edginess and innovation. We want to challenge drivers, spark on-track action and create the best show for the fans,” Marcus Smith, president and CEO of Speedway Motorsports, Inc., said. “This race has always been a proving ground for some of the best innovations in our sport, from running under the lights to stage racing and double-file restarts. It’s the perfect opportunity to try something different, and with a 10-lap shootout for a million dollars, expect the unexpected on May 19.”

The rules of All-Star Race eligibility will remain unchanged. The race will include race winners from after the 2017 All-Star Race, and in 2018 to date. Previous All-Star race winners, Series champions who are otherwise not eligible, three stage winners in the Monster Energy Open qualifying race, and the winner of the fan vote.

“NASCAR is committed to innovation and will always work to improve the racing product for every series and venue,”

It should read “TRY TO improve BRIAN’S product”. Good luck with that.