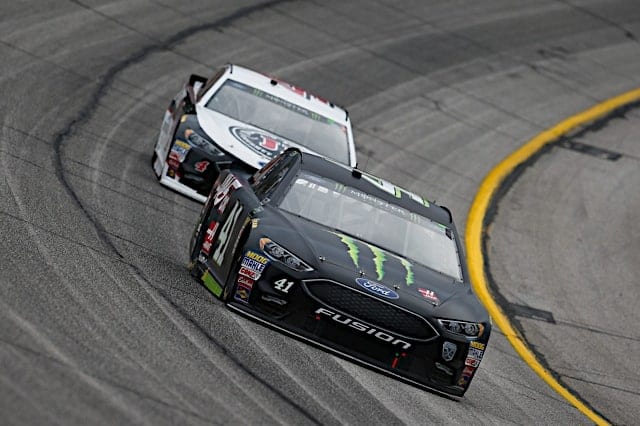 Slightly over four months after Monster Energy was supposed to make its decision of whether or not it will extend its title sponsorship of NASCAR’s premier division, the energy drink company has finally made an announcement.

The popular global beverage will continue to serve as the title sponsor of the Cup Series for at least the 2019 season, signing a one-year extension.

While the deal is good news, it is indeed only for a year. If NASCAR had not reached an agreement with Monster Energy, it would have certainly been perceived as a major blow to the sport for various reasons, including being criticized for not maintaining a partnership with such a powerful organization.

As the Monster Energy partnership will continue, the sponsorship of the All-Star Race will likely continue as well. But there might be some changes coming to the May spectacle.

Meanwhile, Clint Bowyer‘s spotter Brett Griffin dropped quite the bombshell on a podcast this week. NASCAR will be using restrictor plates at Charlotte Motor Speedway for the sport’s lone exhibition race, changing things up in what should be a major — and potentially positive — difference.

A: The extension is one of the best things NASCAR could have asked for. The sanctioning body is pushing for a younger generation of fans, and that is what Monster Energy is doing.

The beverage company has awesome pre-race shows and has quite the solid marketing campaign considering it is investing only $20 million a year for the title sponsorship, according to Forbes. Monster Energy’s activation is solid, and young fans are flowing into the stands as the older generation moves on with the retirement of their favorite drivers.

NASCAR is in a solid spot now. Though the extension is only for a year, it enables the sport’s marketing department to begin looking for a partner (or partners) to replace Monster Energy in 2020. According to NASCAR Chief Operating Officer Steve Phelps, it’s “highly unlikely” the company will renew its deal again for 2020, giving NASCAR a solid year or so to figure out what the path forward is.

The NASCAR partnership was a different move for Monster Energy. It sponsors supercross, Monster Jam, biking and other “extreme” sports, making stock car racing stand out.

“NASCAR and Monster Energy enjoyed a productive first year and both parties have benefited significantly from the partnership,” Steve Phelps, NASCAR chief operating officer, said in a Tuesday press release. “Monster Energy successfully utilized our sport as a platform to elevate its brand and drive business, while introducing NASCAR to new audiences. With this renewal, we look forward to building upon our early success.”

While the task of getting younger fans involved in NASCAR is certainly a tough one, it is doable. The partnership with Monster Energy enables NASCAR to do something unique compared to other forms of racing, and that is to make sure millennials are enthusiastic about the sport.

With younger, vibrant drivers showing off their strong personalities, NASCAR’s future is certainly bright if it takes the proper steps to boost their popularity. Ryan Blaney, Darrell Wallace Jr. and Chase Elliott are just three of the names who can be the future faces of the sport, and they fit perfectly into the Monster Energy fold.

Who knows, maybe they’ll fit in with NASCAR’s next title sponsor, too.

Q: Should the All-Star Race have restrictor plates? – Cameron B., New York

A: Finally, something about the All-Star Race is changing. It took long enough, right?

The XFINITY Series race last year at Indianapolis Motor Speedway was one of the most — if not the most — exciting race of the season. It featured 16 passes for the lead, nearly doubling the previous total at the track, and it only had five cautions.

The addition of a restrictor plate, along with putting aero ducts on the front spoilers and increasing the height of the rear spoiler, made the racing fantastic at a track that usually puts on a lackluster show.

Now, it will be moving to the Cup Series for at least the All-Star Race. Hopefully, it will take place with the aero package at other intermediate tracks, because those events can be brutal to watch if there is little on-track action.

It’s certainly an exciting move for the future of the sport.

Hopefully, this move can set the standard for intermediate tracks. It’s a shame the XFINITY Series isn’t using it more frequently because the slower speeds (about 15 mph slower in qualifying in 2017 compared to the previous seasons) made a true difference in the competition. Just look at the awesome finish it produced, and that happened naturally during a 36-lap run to the finish.

These changes should bring back the randomness of the All-Star Race, along with the awesomeness of the event. Finally, people can get excited about watching this race once again, rather than worrying it is going to be a boring one.

It’s certainly a good solution, too.

NASCAR won’t have to worry about swapping venues from Charlotte Motor Speedway to any other track. Fans often ask why doesn’t the sanctioning body switch things up each year, which I personally think would be fantastic, but this at least can stop that conversation a bit.

More importantly, it shows that NASCAR cares about what fans think. The sport is listening to fan feedback, and that’s why this change is coming.

They tried restrictor plates at New Hampshire and how did that work out. They’re trying the same thing over and over and expecting a different result.

Correct. NASCAR is dumb and so are the people touting this lame brained idea!

“Monster Energy’s activation is solid, and young fans are flowing into the stands as the older generation moves on with the retirement of their favorite drivers.”

I’m glad to hear that things are going well. For a while there I thought attendance and ratings were declining. My bad.

As far as what does the extension mean to Nascar? It means the Frances get to cash a really big check.

Using plates at a totally flat, long track with 90 degree corners was almost guaranteed to make racing more successful. Lord knows, Indy doesn’t do much to make stock car races there anything but a good nap time. However, using the plates at charlotte really doesn’t sound all that useful. Guess we will just have to wait and see.

What does the Monster re-upping mean?

1. NASCAR can no longer find companies such as Winston or Sprint willing to get into long term contracts with a declining product.

2. NASCAR has been honing their turd polishing skills.

Contrary to popular opinion, there is nothing wrong with the product on the track. Declining attendance and declining ratings are symptoms of a systemic problem.

Back around the turn of the century NASCAR turned its back on the very group that brung em to the dance. NASCAR became sanitized. Confederate flags were anathema. NASCAR went after the people who had more disposable income, the wine and cheese crowd.

The good ol’ boys were insulted by NASCAR, and they found other ways to spend their money. That hastened the demise of racing but it was inevitable.

The foundation of auto racing is the weekly home tracks. It is where race fans and drivers are spawned. They produce the new fans that are needed to replace those lost to attrition.

I don’t have a solution, but I can assure you that the powers that be are looking in the wrong place.