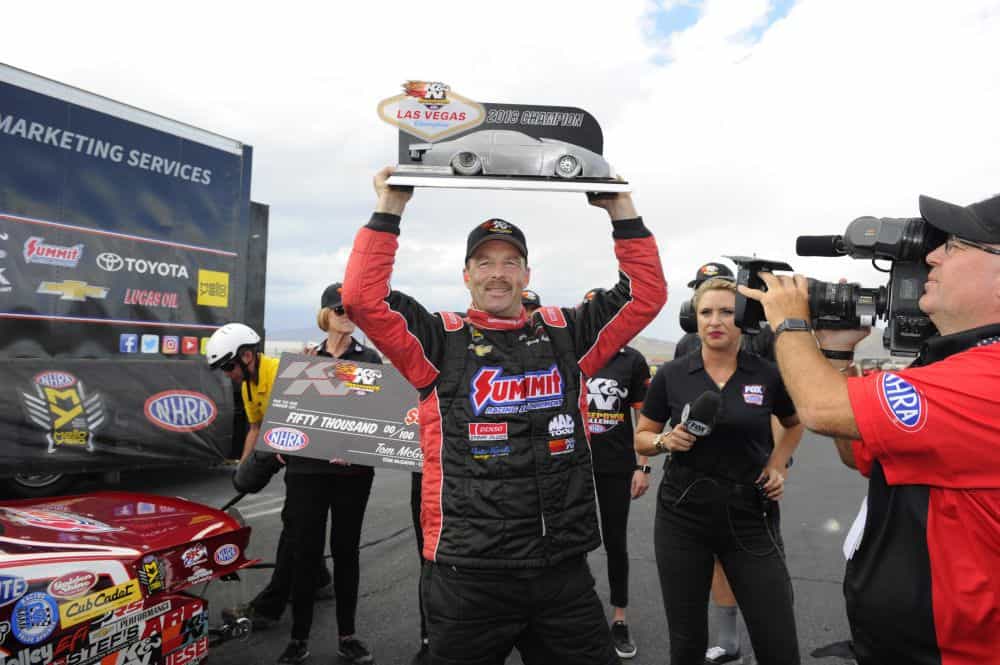 Pro Stock was the first class up for the year to hold their annual all-star event, the K&N Horsepower Challenge, this past weekend in Las Vegas. Greg Anderson proved himself to be the man for this event once again, taking home his seventh victory and his seventh big $50,000 check.

This does, however, bring up a good question. This was the first time for this race being a four-wide contest. Granted anything can happen to any racer on any given Sunday, but does that change in format make it more challenging for a Pro Stock driver to pull off the sweep of the K&N Horsepower Challenge and the race? Does it make it harder to claim that bonus?

In other news, the first four-wide event in Vegas was clearly the success that Bruton Smith and company were looking for as it sold out on both Saturday AND Sunday. Apparently if you build it they will come does indeed apply when it comes to four-wide drag racing. For those of you watching from home, you’ll see it one more time this season in a couple of weeks from Charlotte, the original home of four-wide racing.

As far as all-star events go, the Nitro classes will contest theirs at the end of summer at the U.S. Nationals, but the field is already filling up based on the number of different drivers winning events so far this year. Parity, for the most part, is the name of the game, with Steve Torrence the only driver to repeat in the Nitro classes with two victories in Top Fuel. Doug Kalitta and Richie Crampton won the other two events, which also means that four races in and Don Schumacher Racing has yet bring home a Top Fuel Wally.

Four races has brought four different winners in Funny Car with Matt Hagan, Courtney Force, Jack Beckman and JR Todd each earning trophies. That also represents three different organizations so it would seem that Funny Car, so far, has the most parity in the Nitro classes.

It’s early and of course there’s plenty of time for someone to go on a hot streak, but a clear favorite has yet to emerge this season in any of these three classes.

Teams will take a weekend off this week before heading to Texas for the NHRA SpringNationals from Royal Purple Raceway next week. That means that unless something comes up that needs comment, we’ll return to our history series next week with a look at the career of the first man to hit 300 mph, Kenny Bernstein.