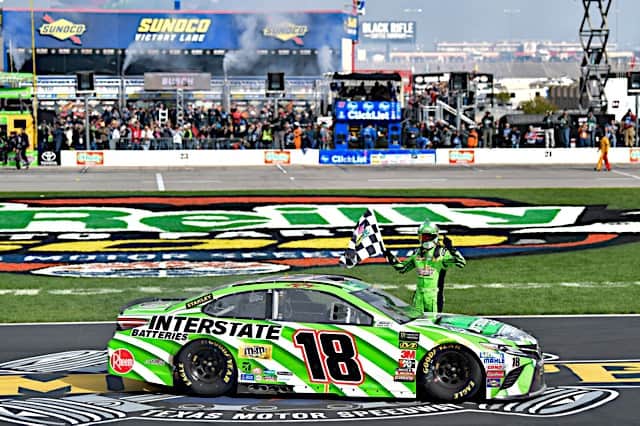 When all was said and done, Kyle Busch finally shook the runner-up monkey off his back, scoring a nearly half-second victory over Kevin Harvick, whose pit crew tried to give the race away in nearly every way imaginable.

What happened behind Busch vs. Harvick? Read on to see how their battle and nearly a dozen DNFs shook up the power rankings this week.

Entering Texas, Busch had finished runner-up in four of the last eight races he ran. That total included a painful second-place finish at Homestead-Miami Speedway last season, losing out on the championship to Martin Truex Jr.

But the driver of the No. 18 Toyota finally got to take a bow in the MENCS this season. Surviving a race slowed by eight cautions, including two for stage breaks, Busch led 118 laps en route to his third career victory at the mile-and-a-half oval.

Celebrating in Texas was huge for Busch’s team. It’s the home of Interstate Batteries, a longtime supporter of Joe Gibbs Racing since its debut in the Cup Series way back in 1992.

But Busch also proved he belongs in the title conversation as the regular season rapidly approaches the one-third mark. He’s definitely the kind of driver capable of clicking off multiple wins now that the first one of the year is under his belt.

Bonus: Busch shared another feel-good deed in the name of fan appreciation while picking up a post-victory meal at In-N-Out Burger across the street from the speedway. Regardless of how you feel about him on the track, it’s hard to deny the kindness and passion he has in his heart for loyal supporters.

This is why I love my hubs! And why you should always wear Kyle gear ? pic.twitter.com/IWxM40uLRN

What is there to say about the No. 4 team that hasn’t already been said? With three wins this season that could easily be five, Harvick is on fire and showing few signs of letting up anytime soon. Sure, he finished runner-up to Busch at Texas However, he was within a half-second of the victory and overcame one heck of a battle to get there.

A pair of loose wheels, a loose tire pit road penalty and a lug nut that managed to get stuck in the jack all worked against the No. 4 team on pit road. Sure, there’s that pesky no-call on a second loose tire penalty NASCAR admitted to after the race ended. Despite that, Harvick clearly had a fast car that was quite capable of another trip to Victory Lane.

Moving forward, though, it’s clear pit road is the biggest problem for the No. 4 team. They really need to figure out how to stop shooting themselves in the foot before it costs them a playoff race that matters.

Not sure what else we could have experienced today but I can tell you we had a really fast car again. Fast car overcame a tremendous amount of issues.

After Richmond’s encumbered win early last season, Logano just looked lost week after week. He and the No. 22 Team Penske outfit turned in lackluster performances to close out the year.

But seven races into 2018, both driver and team appear back to their old championship-contending selves. Aside from a 19th-place finish at Phoenix, Logano’s worst result this season was a seventh last month in Las Vegas.

Texas kept Logano’s momentum rolling. Although never in the conversation for potential race winners, Logano still brought home his third straight sixth-place finish. One top 10 at a time, the No. 22 team is quietly putting itself back into the conversation for the NASCAR playoffs. He’s second in the point standings despite just two top fives over seven races.

It feels like Logano is this close to taking the next step. Team Penske just needs to find that last little bit of speed to push its drivers from consistent top-10 runners into contenders for Victory Lane.

Three 6th place finishes in a row…solid finishes in the stages to score some points but at the end the caution came out and kind of bit us…just didn’t pass enough cars to get back up there. Ready for @BMSupdates

It’s probably a good thing the Easter off weekend fell right after Bowyer broke his 190-race winless streak. Otherwise, he might have still been too hungover from the celebration to put on another solid performance. Running inside the top 10 after starting third in a 1-2-3 start for Stewart-Haas Racing, Bowyer didn’t quite have the speed to compete with Busch and Harvick. However, he did manage to snag his fourth top 10 on the season.

But perhaps what’s more important to remember is just how marked the improvement is for the No. 14 team this year versus 2017. In the first seven races last season, Bowyer had just two top 10s and zero top fives. This year? There’s four top 10s and two top fives, including the dominant victory at Martinsville two weeks ago.

And oh, by the way, Bowyer did a pretty solid job as a guest commentator during Saturday’s XFINITY Series race.

After dominating NASCAR’s XFINITY Series race Saturday (Apr. 7), all eyes were on Blaney and whether he might be able to notch his first win under the Team Penske Cup banner. But early front-end damage when Alex Bowman spun in front of the field put the No. 12 team in a box. They spent much of the race simply working on improving the crumpled nose of the racecar.

That said, Blaney brought home a respectable fifth-place finish. It’s the fifth top 10 in seven races for a driver who started the year by leading the most laps in February’s Daytona 500.

Clearly, the consistency is there. Blaney’s concern since Daytona has come in his inability to lead laps despite the strength the SHR Fords have shown this season. Sure, it’s two different organizations we’re talking about here. But Team Penske has top-caliber Ford equipment that should be matching SHR punch for punch. Can Blaney get over the hump and turn consistency into Victory Lane?

Needed all 500 miles yesterday to get back to 5th. Shame we got that nose damage. Thought our car was pretty fast.

Thanks to a shortened qualifying session due to lightning by the racetrack, Busch led the field to the green flag on Sunday. However, he quickly relinquished the top spot to teammate Harvick and slowly fell off his teammate’s pace.

Still, when all was said and done on Sunday, Busch snuck up front for 40 laps. It was the first time he’d led double-digit laps since the second race of the season. A seventh-place result continues the consistency he’s shown since the start of the year.

But something still seems slightly off with the No. 41 team. A top-10 driver most weeks, Busch still can’t seem to translate that speed into top fives or even wins down the stretch. He’s still adjusting to new crew chief Billy Scott after years of chemistry with Tony Gibson.

In a season that could make-or-break the next step in his career, Busch definitely needs to find his way to Victory Lane. You’d think if the No. 41 team can keep clicking off top-10 results, it’s likely only a matter of time before that happens.

If McMurray was given the option to just forget about the first six races of the season, it’s likely he would do so in a heartbeat. And who could blame him with a best finish of 17th before rolling into Texas?

That’s where he finally made an impact. In a car that showed some great long run speed, McMurray took the checkered flag a solid third, albeit well behind Busch and Harvick. The run marked his best performance on a non-restrictor plate track since finishing second at Martinsville in the fall of 2015.

One third-place finish is hardly an indicator the team has figured out its problems. But it’s certainly the kind of morale booster so desperately needed after a dismal start to the season. Will it turn out to be a step in the right direction or just a flash in the pan?

One of my big fans stopped by to wish me luck before yesterday’s race @TXMotorSpeedway. Excited that we could score our best finish of the year, so far, while you were here!https://t.co/gJCQN43Q7C pic.twitter.com/dBLAnuGhCW

In the past, Texas has been quite kind to Jones. He’s got a combined four victories in NASCAR’s Truck and XFINITY series at the 1.5-mile oval. And, after this past Sunday, the driver of the No. 20 Toyota now has run up front in a Cup car. Holding the top spot for 64 laps, Jones ultimately settled into a fourth-place finish.

The run marked Jones’ first top five on the year and his fourth top 10 in the last five races. Given that he’s still working to gel with his new team after moving to Joe Gibbs Racing this offseason, it’s a step in the right direction. For a driver many expected to find Victory Lane in his rookie season, Jones could definitely use the confidence booster headed into one of his best tracks (Bristol) this weekend.

With just a handful of laps remaining in the first stage, Truex suffered a tire failure and a hard hit into the outside wall that made me cringe. The good news is that he walked away safely. The bad news? His car was toast… almost literally.

Forced to settle for a disappointing last-place finish after just 80 laps of competition, the No. 78 team never got to show the field what it might have had in store. Sure, the first part of the race didn’t appear to show the dominance we came to expect last season from Truex on mile-and-a-half ovals. But there’s no telling what might have been for the defending champion as the race unfolded.

With one win already under his belt and five straight top fives, things are hardly bad for the No. 78 team. But what a battle that could have potentially been if it had come down to Busch, Harvick and Truex as the laps wound down in Texas.

Since his runner-up finish in the Daytona 500, Wallace has been pretty much out to lunch in the MENCS. He’s posted finishes of 20th or worse in the five races that followed. But when the checkered flag flew at Texas Motor Speedway, Wallace walked away with an eighth-place result.

While it’s far from the kind of finish that would result in the emotional outbursts seen by his family post-Daytona, it’s the kind of momentum this rookie needs. In fact, it should serve as a confidence booster for a driver trying to carry Richard Petty’s organization to the next level.

A single top 10 does not equate to the cure for what ails the No. 43 team. However, the band-aid just might be strong enough to help push Wallace to the next level in the coming weeks.

Solid day for our @RPMotorsports group! All weekend my guys had us in the game! Small gains goes a long way!

Thanks for the love n support!??