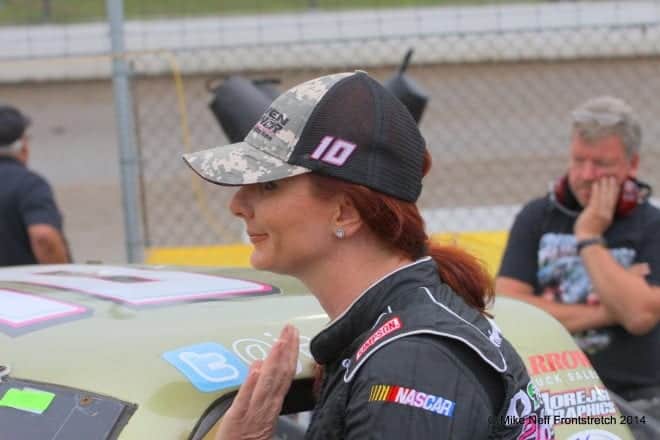 “I was racing in the NASCAR Camping World Truck Series in Homestead-Miami and my truck was having engine problems,” Cobb told motorsport.com. “When I climbed out of the truck in the garage area Regina and Hubertus (Heyman) were standing nearby.  We started talking and they told me they were team owners in the NASCAR Whelen Euro Series.

“I expressed interest in racing in the series and told them that if there were ever an opportunity, I would love to race with them.  Over the following months, we kept in touch and Hubert and Regina attended our races in Daytona and Atlanta and we were able to speak more about making this happen.  They are really the ones who went to work to make this a reality and I am very grateful for them.”

Cobb’s weekend of racing has already begun as she headed to the track for pit stall setup day.

1. It’s freezing here for some reason! 2. I’ve met the first two team members and they only speak German. 3. iTranslate does not do English to German very well. ?

In honor of that start this weekend, we take a look back at how Cobb’s career came from an engine-failure-shortened debut in 2008 to the full-time effort she runs today in a piece that originally ran in 2015.

Jennifer Jo Cobb made her Camping World Truck Series debut at Kansas Speedway in 2008 but suffered an engine failure just 31 laps in, sliding behind the wheel of a Derrike Cope-fielded Dodge. It was a scratch-and-claw effort that was the start of pursuing a mountain-sized dream to one day make it as a full-time NASCAR competitor.

Fast forward to the 2015 season and those dreams, while financially tenuous, have become a weekly reality. Cobb’s running her self-owned team on a full-time schedule, becoming a staple on the Camping World Truck Series tour where she broke into the sport. But sponsors, along with success have been tough to come by at times, leaving her team scraping by based on the big-budget operations it competes against. The owner of the No. 10 truck is even fielding a second start-and-park effort, the No. 0 to help raise funds and keep her organization afloat.

However, during a time when independents have found themselves increasingly invisible Cobb has found a way to survive. This year marks the seventh season she has run her own team, and despite the challenges, created mainly by a lack of funding, she keeps on truckin’ week after week. This season has been one of hope and improvement for the 42-year-old, who just made her 100th career start two races ago. Though there aren’t any top 5s or top 10s in the statistics surrounding her year, that won’t keep Cobb from being optimistic.

“It’s good. Our goal is always to improve, even if it’s just in small manners, and I think that we’re seeing that improvement,” Cobb said at Texas Motor Speedway a few weeks ago. “I feel good about the state of the team and the attitude and the growth. We’re seeing a growth in sponsors every single year, growth in our fan base every single year. We have a very happy team. What more could you ask for than to continue to grow?”

Cobb is a rarity in a field of teams with multiple corporate sponsorships and millions of dollars backing their trucks. While many are focused on their own success and improvement, competing for wins and the series championship her team just hopes to earn top 15s. It’s a tough time for these “Davids,” increasingly marginalized as the Goliaths get richer but Cobb sees the big picture. While fending off extinction herself, she sends a message of support among all full-time teams, no matter their finances in order to keep the field from shrinking.

“I always say all 32 trucks in the field are important and we need to look out for each other,” she explained, suddenly taking on a more serious tone. “If we start losing more and more teams, we’re no longer going to have a series. I think it’s in the best interest of everybody to have good sportsmanship and help keep everybody going.”

That passion for all teams to understand each other came through in Cobb’s incident with Tyler Reddick at Dover. Early in that race, the No. 10 nosed into the inside wall, seemingly off of the front bumper of Reddick’s truck. As a result of her anger over the incident, Cobb got out of her truck before safety officials arrived and walked up the track to gesture her displeasure. Though she made her point, NASCAR handed down a $5,000 fine and probation through the end of the year to Cobb for violating the rule that states drivers must remain in their vehicles after the wreck. In public comments after the incident, while frustrated Cobb seemed just as focused on teaching Reddick as defending herself.

It’s not like Cobb isn’t focused on success for her own team, though. Jennifer Jo Cobb Racing gets by week after week on a fraction of the cost and still manages to make it to the track, finishing races and qualifying in on speed. Relying on her passion, her faith and a little luck, Cobb keeps going even when it looks like the end is near.

“It’s what I love to do. It’s tough. I hope it doesn’t sound like we’re complaining,” she said when asked about why she keeps racing if money is that tight. “This is what we love. We live for this. We can’t wait to get back to the racetrack. There’s so much satisfaction to go out and be able to compete – and sometimes beat – teams with 100 times your budget. It’s very rewarding.”

Cobb’s passion for the sport is unmatched, even though the results on the track show very little in the way of success. Many of the people involved in JJC Racing are volunteers and continue to work hard, thriving on being involved in the sport no matter how small the role.

“We also have a really cool purpose in a lot of our volunteers that help us out,” she said, smiling. “A lot of them are just getting out of NASCAR Technical Institute school and working for us; a few years later, they’re working for Cup teams. To know that we played a part in their chain of events is also a good feeling.”

That kind of passion and the joy that comes from those successes, no matter how small, are emotions the sport in general is sorely lacking these days. In fact, entering the series as an independent owner is a dinosaur that’s nearly non-existent in the Truck Series. How does NASCAR bring back the passion, getting new owners to start from scratch and compete against multi-truck giants? The answer may not be as simple as you think.

“It takes a lot of sacrifice. We don’t fly on jets a lot of times, not even commercial. We drove 16 hours from Mooresville to Texas. For me it’s worth it, and I think for anybody that can have the strength of mind to do it, as well as physically to be able to do it, then it’s what you want to do.”

For Cobb, it’s not just the money and passion that keep her going. With a smile, Cobb credits her dad as the biggest influence in her racing career and says he helped her get “to the point of the big leagues.” Meanwhile, head wrench Steve Kuykendall continues to influence Cobb’s success. Calling him a great business partner, she says “we would never have made it this far without my crew chief” and points to a strong friendship and working relationship between the two as the biggest reason they’re still racing. Also a regular attendee in the weekly chapel services, led by Motor Racing Outreach chaplains, she relies heavily on her faith to pull her through the good times and bad.

“I’ve always felt like this is what God put on my heart to do and if I’ll keep doing my part, He’ll keep doing His part and He’s never let me down yet,” she explained. “Even when it looks impossible, something happens, a small sponsor steps up and gets us to the next step when we thought we were through. I’ve learned to trust.”

Despite everything she’s been through, Cobb continues to increase her goals for the team this year and beyond. Through nine races this season, the driver has a single DNF at Dover but currently holds a better average finish (22nd) than she has in her career. It’s far from competing for a championship or even a trip to Victory Lane, but steady improvement brings in more sponsorship, which brings better results, a cycle that can be sustainable and help to build participation in the series.

“Our number one thing is to finish races, continue to improve. I’d like to see at least a top 10 out of Talladega,” she said with a smile. “That levels the playing field on those superspeedways to where some of the smaller teams can get up there, so I’d love to see that happen. Continue to stay in or near the top 15 in points and continue to build that momentum going into 2016.

“Survival is a pretty big deal for a small team without a major sponsor. To be able to get through the winter when there’s no income and there’s no races. Just to continue from a business model and a competitive standpoint to continue to grow and improve.”

And improve is exactly what the driver of the No. 10 has managed to do.

J.J. Cobb like many other drivers do not get the tv coverage that the big teams do. I have commented on this in the past, Fox commentator M.Waltrip and the camera crew seem to go out of their way not to mention J.J. If they got more coverage, they may could get better sponsorship.