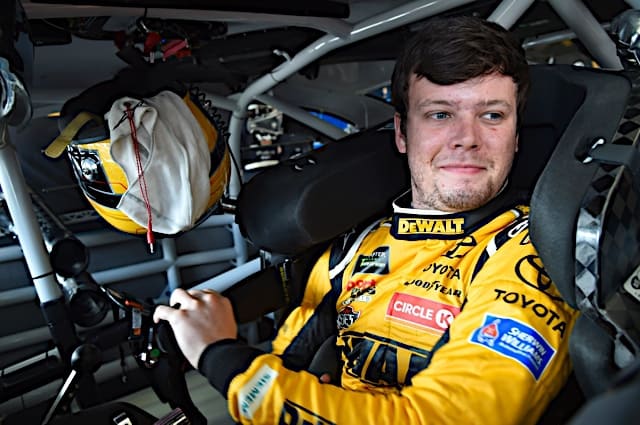 1. Who will be next to make the All-Star race?

Currently, 17 drivers have met one of these criteria, which leaves about 20 drivers eligible out of the running. There is still room for drivers to advance through winning stages in the Open or win the fan vote, but the only way for names such as Chase Elliott or William Byron to stamp their spot in before that weekend would be to win one of the next five races. Bristol and Talladega loom large as wild card tracks that a wide variety of drivers could conceivably end up winning at.

Bristol this weekend may end up being a certain sophomore driver’s best chance at winning his first Cup race and getting into the All-Star Race.

2. Can Erik Jones live up to his expectations at Bristol?

Of the 310 laps Erik Jones led last year, 260 of them came in the fall race at Bristol. Being passed by his mentor, and former boss Kyle Busch with 56 to go robbed him of his first victory at the Cup level, but he still ended up second. In the spring race, Jones wasn’t nearly as good as he was in the fall, finishing 17th, but he still ran in the top 15 most of the day. And remember, he more than doubled his number of career starts in the 15 races in between those two races.

Jones has found a lot of success at Bristol in lower series competition. He has won the past two spring races in the XFINITY Series and finished sixth in his lone start there in the Camping World Truck Series.

What’s more important is that Jones will be entering this weekend with some momentum. He got his first top-five finish of the season last weekend at Texas, and has made gains (a 13.1 average finish in 2018 vs 17.1 in 2017) in his second year in Cup, which is typically a bit of a step back for young drivers. Even better, now that his teammates include Bristol king Busch and former winner Denny Hamlin, he’s going to be able to learn a lot about the track just by looking up.

3. Will the pit gun saga continue?

One huge story in the fallout from Texas last week were the pit guns NASCAR provides to all teams to use. Kevin Harvick and crew chief Rodney Childers blamed their lack of a victory on their pit stop struggles due to the guns. Nevermind NASCAR admitted after the race that they should have penalized the No. 4 team for an uncontrolled tire when they didn’t, and at least one of their pit problems had nothing to do with the guns. But to their credit, they were not the only team to have problems on Sunday.

There were a near constant stream of cars having to make unscheduled pit stops due to having loose wheels. So why did NASCAR mandate teams use guns they provide if it leads to all of these problems? Well, the teams wanted it. Why did the teams want it? Because some teams, Joe Gibbs Racing being the first I noticed, had started to invest a ridiculous amount of money on trying to develop fast air guns. Taking away team provided air guns probably reduced costs to compete by a great amount.

But it’s concerning that after seven races there have still been a ton of problems. In 2012, NASCAR switched to a McLaren electronic fuel injector system in every car, and in the first few races of the season, there were definite problems with the new system. It was a huge story the first few weeks of the season. But by the end of the year, everybody had long forgotten about it because NASCAR and McLaren worked out all of the kinks in the system by April. It’s not good that after another major change, there have been more signs of regression than of progress with these pit guns.

4. Who will dominate and who won’t on the “Bristol Bite”?

This will mark the fourth straight Bristol weekend where the track will be applying a traction compound on the bottom of the racetrack to artificially create two lanes of racing.

Drivers like it because it opens the bottom up for them to pass, instead of just having to stay on the top side of the racetrack. Some, however, seem to like it more than others.

Since the advent of the process, three drivers in particular have been head and shoulders above the field. Kyle Busch was hampered the first two races with DNFs due to crash damage, but he led over half the first race and won the third. Jimmie Johnson was mortal at Bristol even back when he was Superman, but he is the defending race winner this weekend and his worst finish in the past three races at Bristol has been 11th.

Finally, there’s Kevin Harvick. His average finish of fourth leads all drivers, and his win in the 2016 fall race was also the first with the track like this. Expect all three to be major threats to win. Meanwhile, don’t bet any money on Ryan Blaney being very competitive this weekend. He ranks 27th in points scored among all drivers in the past three races at Bristol and has never led a lap at the half-mile.

I think the real story about the ‘pit guns’ is who chose Paoli and why?

According to an article from February, “The new standardized air gun program was the brain child of both the RTA (Race Team Alliance) and NASCAR as a cost-cutting and competition enhancing measure.” I think the name PAY(to NASCAR)oli explains how the got there over other brands.