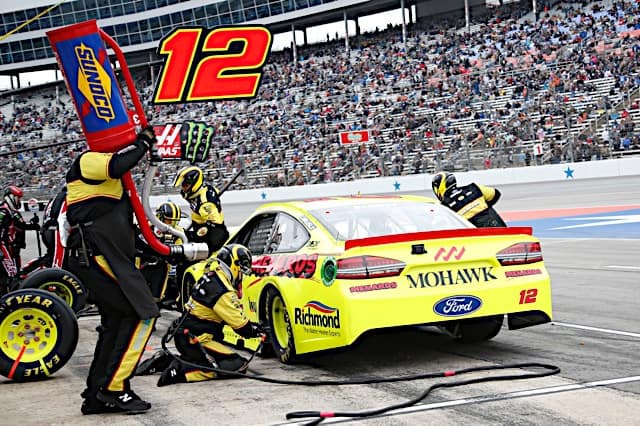 Kyle Busch has finished second, second, third, second and first in his last five races and currently leads the points standings. Is he the best driver in the Monster Energy NASCAR Cup Series at the moment?

Davey Segal: I’d call this one a push. Kevin Harvick has the edge on wins over Kyle Busch, but Rowdy has been running more consistently up front, albeit on a relatively small sample size. If it’s any indication, I’m sure we’ll see these two battling it out throughout the rest of the season and probably in South Beach for the hardware come November.

Mark Howell: Kyle Busch may not be the best, but he’s certainly the most consistent. The No. 18 team has finally scored a victory, which usually means there will be more to follow. Given how Busch runs at Bristol Motor Speedway, he’s a safe bet to win again this weekend.

Mike Neff: Best driver is always a subjective discussion. Busch may have three seconds and a third to go with his win, but Kevin Harvick has three wins along with his second this past weekend and a fifth at Martinsville Speedway. Heck, the driver with the best average running position in the middle of races is Clint Bowyer. You can slice this any way you want to. The best two right now are Harvick and Busch, though.

Drew Mongiello: Without a doubt. It was tough tell the last couple of years because of how far ahead the Toyotas were of the pack. But now with Stewart-Haas Racing being the hotter team, Busch has been the only person consistently battling Harvick/Bowyer/Kurt Busch. Even at Auto Club Speedway, where Martin Truex Jr. dominated, Busch easily could’ve won the race had his team made the right adjustment in the car. As much as I don’t like his attitude and how triggered he gets on Twitter, I have to be honest: he’s the best driver in the series.

Amy Henderson: Busch has been ultra-consistent, but at the end of the day, it’s Harvick 3, Busch 1 on the win board, so I’d say that gives Harvick the current edge.

Kevin Harvick’s uncontrolled tire penalty that was not called, coupled with Ryan Blaney’s penalty, prompted questions after Sunday’s O’Reilly 500 at Texas Motor Speedway. Does NASCAR have a problem with its officiating?

Neff: Nope, not at all. The amount of violations they catch now vs. the old eyeball-it days is crazy. Did they blow the call with Harvick? Absolutely, but they caught other issues for him and many others this weekend. The system NASCAR has in place is working great. People make mistakes, and that is part of what makes sports entertaining.

Howell: When hasn’t NASCAR had problems with officiating? Accurately monitoring 30-plus cars and crews on a crowded pit road is anything but a perfect science no matter how many cameras you have trained on the action. If NASCAR struggles to get pre- and-post-race inspections right, we can’t expect perfection during tire changes. I can’t help but think that some of the issues stem from the clunky pit guns teams have been dealing with all season.

Segal: Yes … but that doesn’t mean that it’s a huge, overarching, stop the presses, the sport is going down the drain problem. The NFL has way more officiating problems than NASCAR. Heck, their referees went on strike for about half a season a few years back. People still don’t know what a catch is. So if NASCAR misses (and owns up to) an uncontrolled tire penalty every now and again, I’m fine with it. I’d rather have humans making these split second calls than a computer. It was a ball/strike call, and the umpire got it wrong. It happens. Life goes on.

Mongiello: It seems that the human element is what is hurting NASCAR officiating. When they gave no penalty to Harvick, you saw the official fist-bumping with the crew members. It needs to be more like Formula 1, where they officiate away from the competition and have one figurehead answer questions when needed. The situational element (Harvick’s moment was with 20 to go) mixed with the human element leads to misses such as these.

Henderson: Do they have any more of a problem than any other sport that has to make judgement calls midstream? Probably not. I’d still argue the biggest officiating problem is the refusal to take wins away when it’s warranted.  Did they blow the tire call Sunday? Yup.  And they admitted as much.  It happens.  If it happens every week, it becomes a problem.

Monster Energy extended its sponsorship of the Cup Series through 2019 but have been reported to be “highly unlikely” to return after. What does this mean in terms of entitlement sponsorship for the premier series?

Segal: Man, I’ve grappled with this one all week. And I must say, I really don’t have a great feeling about this. I know Steve Phelps hinted at a new “Olympic” style model, with a few companies sponsoring the premier series for 2020 and beyond … but that just doesn’t sit right to me. It’s worked in the Olympics, and the NCAA, and the English Premier League, I get it. But NASCAR is just… different. I hope to the good lord above that I’m wrong, and it does work out swimmingly. It’s no secret that the sport isn’t in the best place sponsorship-wise at the moment. And this sure doesn’t help.

Mongiello: It’s more on Monster, which may not have truly known what it was in for with NASCAR title sponsorship. The activation negotiation process is much more complicated, with many entities (teams, track and media) all having a say. It hasn’t seemed too on-the-ball compared to Sprint. Monster has a good series in Supercross and should continue the pursuit of expanding partnership with that series.

Howell: Times change, and so do title sponsors. With only a few race teams carrying significant primary sponsorship, we shouldn’t expect anything less for the entire series itself. The current corporate culture leans toward shared promotion, so I’m expecting to see the Cup Series be parceled out among three or four sugar daddies come 2020.

Neff: This means we have another year to find a title sponsor for the future. Not knowing if the sport would have to find one for 2019 was unsettling. Now having a sponsor in place for next year and knowing it most likely isn’t coming back for 2020 means that the sales folks for NASCAR can focus on finding a title sponsor. Who knows? Monster might just decide to shock everybody and ink a five-year deal after 2018.

Erik Jones, Ryan Blaney, Darrell Wallace Jr., William Byron and Chase Elliott all finished inside the top 11 this past Sunday. Was this more because of attrition, or have the young drivers possibly turned a corner?

Neff: Attrition was a big part of the finish for Darrell Wallace Jr. He wasn’t really contending for the top 10 before his team’s strategy call put him in place. Erik Jones, Ryan Blaney and Chase Elliott have already contended for wins or actually won, so they were looking back at the corner already. William Byron has been doing exactly what he needs to do. He’s finishing races, taking care of his equipment and learning, all while building up a solid reputation with his competitors. He will be running up front consistently once Hendrick Motorsports gets its collective act together.

Segal: I would say it’s a bit of both, but would lean towards attrition. When you have veterans such as Jimmie Johnson, Martin Truex Jr., Denny Hamlin, Ryan Newman and hot drivers like Aric Almirola and Kyle Larson finishing 32nd-37th, you’ve gotta sit back and say, “Whoa, what happened?” Well, Texas happened. Wallace, Jones, Byron and Elliott all put themselves in a position to succeed on Sunday afternoon, so kudos to them for that. But until I see the young guns run up front with consistency, week after week, I’ll hold off on saying they’ve surpassed the “old folk.”

Mongiello: It’s just experience coming in to play. Jones was sort of a non-factor for the first few races, but he’s very talented and has come in to his own with more experience with that team. Blaney is performing perfectly on target, it seems, as the Team Penske drivers are always in the top 10, but his car isn’t quite good enough to compete for wins yet. Wallace lucked out with strategy in Texas. His car isn’t good enough to compete, but good swings of luck mixed with Wallace’s talent will bring good results like we saw in Texas and Daytona. If the Hendrick cars weren’t so noticeably a step behind, we’d see more top fives from Elliott. It’s hard to make a good call on that team through its struggles.

Howell: While these young drivers enjoyed good runs on Sunday, you can’t ignore the benefits of surviving high attrition. It was refreshing to see these kids have strong races, but it’s been an ongoing, uphill slog against the seasoned veterans. Fewer cars lead to better finishes if you keep the wheels rolling in the proper direction. If you can’t stay out front, stay alive.

Henderson: Probably a combination of both.   Sometimes it’s better to be lucky than good, but if you’re good, eventually you’ll get lucky.