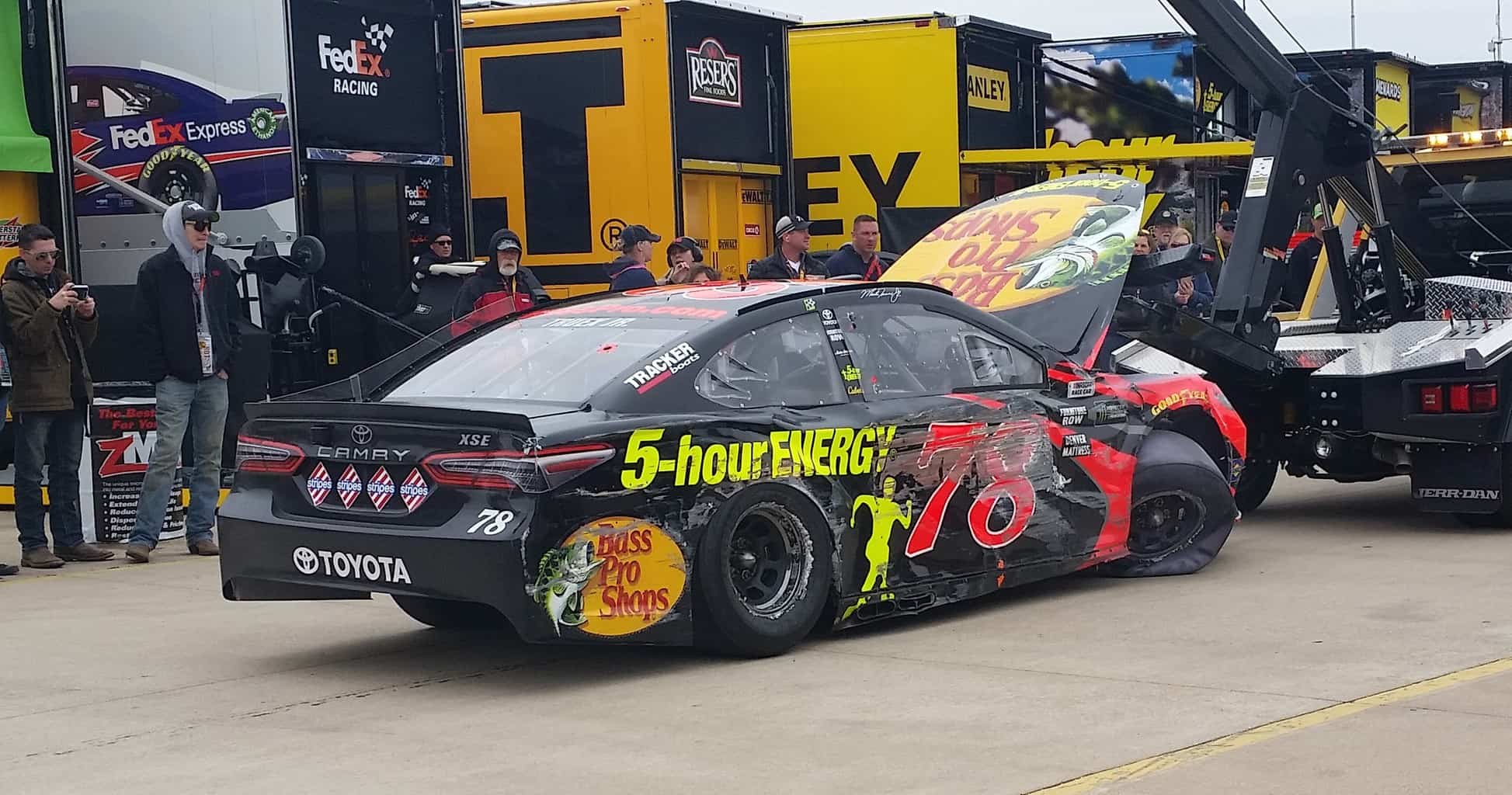 Martin Truex Jr has owned 1.5 mile tracks - but not this past Sunday at Texas (Photo: Beth Lunkenheimer)

Sure, there are topics that could be addressed to start off this column but whatever, let’s just get to the happy.

Happiness Is Tires. The race this past weekend seemed somewhat peculiar for the tire issues that surrounded the Monster Energy NASCAR Cup Series race.  It may have been the chilly temps and the fact that the tires couldn’t warm up as they might usually. It might have been aggressive setups.

Whatever the case, the fact that tires, and how teams managed them, mattered was actually a great showing for the sport.  The race may have been too long, and the tire failures too common, but this aspect of the sport is one that should actually be more prevalent.  That the idea has been floated of having different compounds available to teams during the race is something that deserves more investigation and trial.

Because the cars are so reliable, the implementation of strategy must be encouraged in areas other than the overt mechanical places, and tires come as one spot that should have more consideration.  The Auto Club Speedway chews up tires and usually rewards the driver who can manage them the best and it seems that the race at Texas featured something similar, and possibly one that some teams weren’t ready for.  More tires that aren’t rocks, please.

Happiness Is Saving Face.  One of the big announcements to come from NASCAR this week was the fact that the sport has tinkered so much with the All-Star Race that it will continue to confirm that no one really knows what they’re doing.  If teams are going to start using restrictor-plates at 1.5 mile tracks then the question that really needs to be asked is: Why hasn’t the sport invested and pushed to move to using V6 engines which are more commonly found in today’s passenger vehicles?  Forget that whole notion of logic and progress and let’s focus on the other announcement.

That big noise that you heard coming from NASCAR headquarters was the exhalation in a sigh of relief over Monster Energy signing to remain the titular sponsor for the series. While it is easy to pick on this news item, the truth is that it is and isn’t significant.  To reword the idea, keeping Monster onboard another year looks good but also foretells that the times of a series sponsor are being cast aside. From a fan’s perspective, the announcement may best be summed up with: who cares.

The collective harumph from fans is perhaps the most ignored aspect of this story.  Sure, pundits can argue that Monster has been a weak partner and that they are likely to leave and having series sponsors often limits the participation of other companies.  Those points are valid.

But really, what does Monster do to make a fan actually care that the company is involved?  That aspect is one that has often been ignored and it’s possible that the announcement that NASCAR might not seek a series sponsor when the Monster deal ends could turn out to be a huge benefit to fans.  Rather than corporate interests holding the dominant positions, tracks would be more involved, and in that way filling the grandstands could return to a priority with tracks providing better access to drivers, combined with a recognized focus to attend to fan’s desires.  So while the announcement serves as a way for NASCAR to pretend everything is fine, the future should be rosy for fans.

Happiness Is Gasly.  There’s finally something remarkable to say about what is going on with Honda and F1 and it came in the form of rookie driver Pierre Gasly of all people.  Honda’s return to F1 has been an easy target for jokes and it’s quite possible this writer has made one or two at one time or another. But this past weekend in Bahrain was cause for celebration.

Driving for the junior Red Bull organization, Toro Rosso, Gasly was able to post an impeccable qualifying time that put him in fifth to start the race.  The general belief was that he would be overtaken by a number of cars behind him and eventually fade into the double digits. To everyone’s surprise, possibly including Gasly, he was able to start well and basically maintain his position.

Gasly held off Kevin Magnussen, Nico Hulkenberg, and most importantly Fernando Alonso, to bring the Toro Rosso across the finish in fourth, his best finish in the series – obviously.  This kind of result is exactly what Honda has needed as it shows they do have the capability to hang near the top of the grid when not dogged by reliability issues.

Whether the fourth-place result is a consequence of peculiar circumstances or a highlight that portends similar future finishes is the key.  For a series that has struggled to crowd the top of the grid, with Mercedes and Ferrari fighting it out while Red Bull plays spoiler, having Toro Rosso and Haas F1 hanging in the top five is spectacular news.  Throw in the fact that Alonso managed another top ten and things are actually looking good as far as competition is concerned. That seems strange to say. The F1 season continues this weekend with the Chinese Grand Prix.

The idea of different tire compounds is one that has been used quite successfully in F1 and certainly adds an element to the race that is certainly missing in nascar. You have to look no further than last weeks race at Bahrain where Bottas on mediums was chasing down Vettel on the super soft’s for the win. Would Vettel’s tires hold up long enough? Something you don’t see in nascar.
Now I freely admit the downside to doing it in nascar are the caution flags. But surely smart people can figure out a way around that.

As far as Gasly, perhaps a new star was born, but the Torro Rosso/Honda vs McLearen/Renault battle was full of irony as well. Although early days its beginning to look like McLaren jumped a little too quickly.
China however may be a different story.