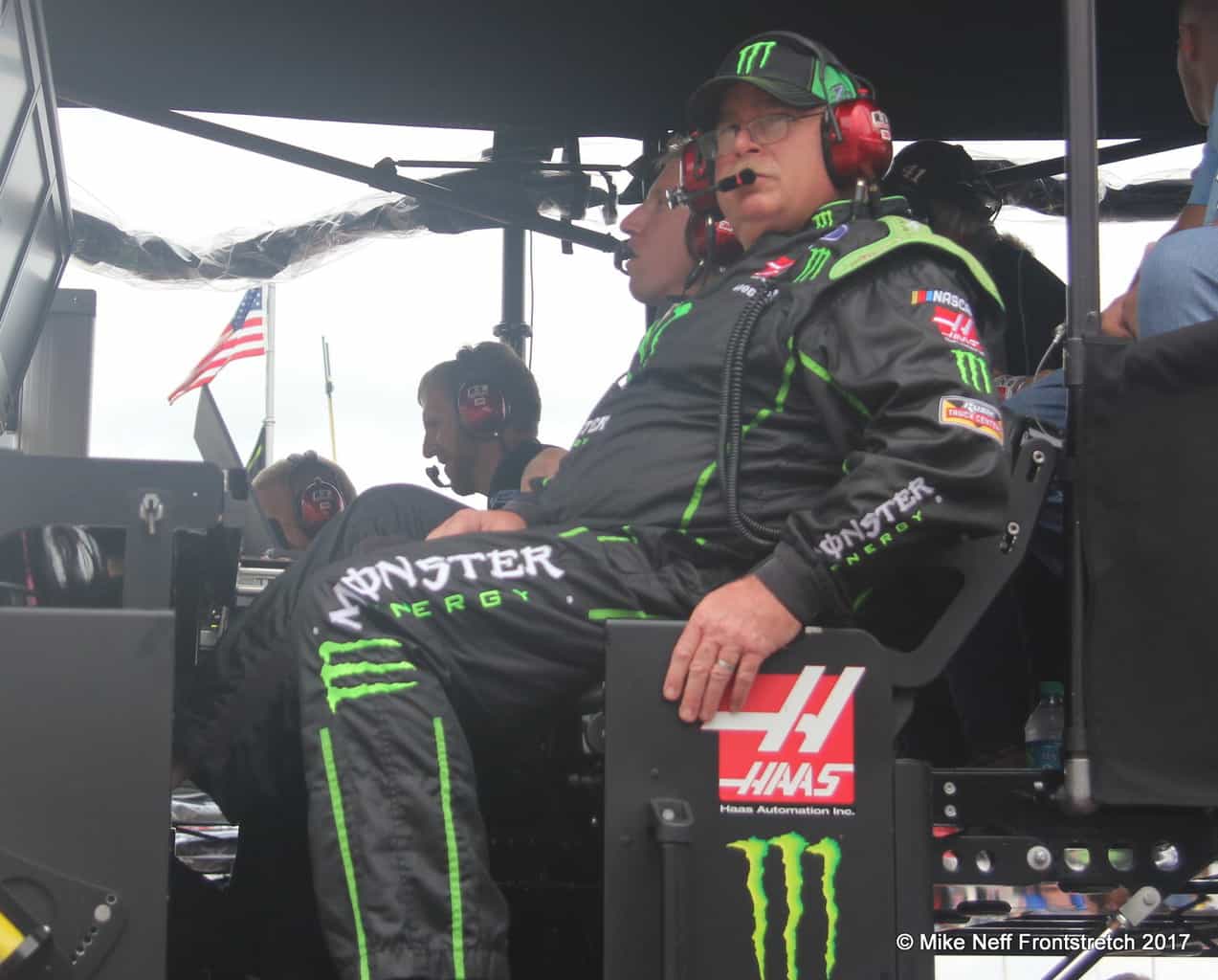 Texas Motor Speedway was another strong showing for Stewart-Haas Racing. They swept the first three spots in qualifying and had two different cars lead laps, finishing with three in the top 10 and claiming second place with Kevin Harvick. The success of the organization this year is at least partly attributable to Tony Gibson directing the production side of the SHR preparations.

This week in Tech Talk, Gibson revisits Texas and explains why the track stayed a single groove even with all of the efforts of the speedway. He then looks ahead to Bristol and discusses the potential use of PJ1 again, bump stop loads, truck arms and track bars all being under heavy load at the high banked concrete half-mile in east Tennessee. He also gives his take on the pit gun variances that are plaguing the teams this season.

Mike Neff – We are coming off of Texas and the Stewart-Haas cars were once again running at the front, although you didn’t snag the trophy. Kevin Harvick was possibly the fastest car, Kurt Busch led laps and Clint Bowyer was near the front quite a bit. Aric Almirola was strong until he got caught up in the ‘Big One’. Even though you didn’t win, are you happy with what the SHR organization did this weekend?

Tony Gibson – Yeah, all four of our cars had really good speed. We qualified first, second, third and 12th. In the race they were all in the top 10 before Aric got wrecked and looking pretty good. Then Harvick had his pit struggles there. Kurt led for a while and Bowyer was in the top three or four. It ended up being a pretty good day for us. The way things panned out, Harvick was probably the best car there of anybody but it took him most of the race to get back up there and contend for the win. The aero side of things played against him at that point. Kyle Busch knew right where to run to take the air away from him.

It was a good solid day. Three cars in the top 10 is really good. I feel like Aric would have been there. He just got caught up in something that wasn’t his fault. I think our cars have been fast every week. That is what I care about is having all of them there with a chance to contend.

Neff – You weren’t on the box in Texas, but you communicate with your crew chiefs. What is it about that track that, even with all of the effort Eddie Gossage and his crew put in dragging tires around there, it was still a very tight, single groove track around the bottom?

Gibson – It is a fairly new repave, having only been paved in 2017. The bottom of the track just has so much grip, and it is the shortest way around. It is going to take five to six years to get that to go away and have the top come in. The bottom is going to be a while before it isn’t the fast way around. It is so short around there and has a ton of banking down there. Especially in [Turns] 1 and 2, there is less banking down there so you have to run right on the white line just to keep the car loaded up. Eventually that grip will go away on the bottom and then guys will move up. Then it will be equal or maybe a tick better on old tires on top. I still think we have two or three more years before that happens.

Neff – A couple of our readers reached out this week and were curious about the torque of the new pit guns. NASCAR tests the guns and we’re assuming they tighten the nuts to required torque, provided they keep the gun engaged all of the way to the point the nuts contact the wheel, correct?

Gibson – In a perfect world, yes. The problem they are struggling with right now is the inconsistency of the gun. You can see anywhere from 500 to 3,000 RPM variance from gun-to-gun. We know that the seals in the guns make a difference. You can see at least 500 RPM difference between new seals and used seals in a gun. Some of the guns are being used more than others and things are a little looser so you see even more variance with those. Then you are at the mercy of an XFINITY car using it on Saturday and you don’t know what they did. They may have dropped it, thrown it, or whatever. Now you are at the mercy of someone else using it, giving it to you, and you don’t know what you’ve got. I think there is just too much inconsistency in the guns themselves and they are having a hard time policing it so far. At least that is what I am seeing out of them. I think they have a lot of work to do on that. It will be interesting to see how much further they go with this before they go to a backup plan. I have a feeling that if they continue to have problems week-in and week-out, they’ll have to do something.

Neff – Heading to Bristol, are they doing the PJ1 grip compound again?

Gibson – I have to assume they will do the bottom again. I don’t know either. Someone asked me at the shop today and I never asked or checked in about it. I would say they’d do the bottom groove. The bottom three feet like they did the last few races. Even if they do that, by halfway through our race, all of that stuff will get worn off and get drug up the race track. Guys will be back to rim riding again. They’re never going to stop that, I don’t think. I don’t know 100 percent, but I would say they’ll put that stuff back down. Probably put down a light layer of it on the last three feet on the bottom.

Neff – With the extreme banking they have up there, even banked on the straights, with the new ‘no ride-height’ rule, do you have to utilize extra strong bump stops just because of the loads you are throwing into those when you slam into the corners?

Gibson – We see loads more than that at Dover, Texas and even Vegas, but they are more sustained loads. As you said, at Bristol it is more of a shock. The load goes from a 300 pound stop load to 3,500 pounds of stop load in the blink of an eye. It is typically the shock of it and the slamming of it that wears those things out and does damage to them. It is one of those places that we’ll put all new stuff on for the race. We may practice the final practice with all new stops, just to make sure. It depends on what type of stop we are running. If it is a metallic stop, which is typically a steel type of stop, you can beat those things to death and they are more of a linear stop and can handle the loads. If it is a polymer stop, which is more of a plastic stop and can be affected by heat, those are the ones we worry about the most at those places. Most guys steer away from polymers at places like Bristol and Dover. In the end we put new stuff on for race day and hope for the best.

Neff – Since we are putting so much reliance on those stops with no requirement for ride height, when it comes to springs, are they just there enough to keep the car off of the ground while it runs down pit lane?

Gibson – No, at a place like Bristol, to keep those things from slamming so hard, you’ll keep a certain amount of load in the springs. At Bristol and Dover, we typically run a higher base rate spring just for that reason. It just depends on how much you want to beat through it. There are some guys at Bristol that barely touch the stops. They’ll rely on that spring and just touch the stop to catch it at the end of travel. They use a really stiff, base rate spring to carry the majority of the load.

Neff – As for shocks and even the A-arms up there, do you have to beef those up again just because of the intense loads and violence of the loading in the corners at Bristol and Dover, 1,000 times during the race?

Gibson – We just put new eyelets on them. Most of the time at those places we just try to put new guts inside the shocks. New pistons, new shims because those split a lot since they are so thin. A lot of times, at the high speed tracks, they will split the shims. So we just put all new in for the race, dyno them really good and then hope for the best.

Neff – With so much of the time having these cars slammed down to the earth, do sway bars really come into play anymore or are they just here to spread the load across the front?

Neff – For the truck arms at the rear of the car, with the amount of load that goes on them and the torque that is created with the tight radii of the corners up there, does that put extra load on the bushings at the front of the truck arms?

Gibson – We actually aren’t allowed to run bushings anymore, everything has to be a steel mono-ball in a housing. So most of the load is fed through the truck arms laterally, not so much fore and aft. Where you are running your track bar will determine how much load you run through your left truck arm versus the right one. Lowering block will determine how much it will twist and bend. There are so many other things that go along with that to take loads in and out of the truck arms. There are no more bushings or anything, NASCAR went away from that, so there isn’t a whole lot of stress up there on those parts. It is all back where the springs and track bar is.

Neff – Putting so much lateral load on the track bar, do you have to reinforce those for races at these higher load tracks or are they already pretty stout?

Gibson – They are already pretty beefy. NASCAR regulates that and they have hard rules on those that let you know what you can do and can’t do as far as bracing and what the materials for those brackets can be. We don’t do anything there that we do at any other track.

Nice to hear hard core tech stuff from a guy who’s been around a long time. Keep it coming Frontstretch!