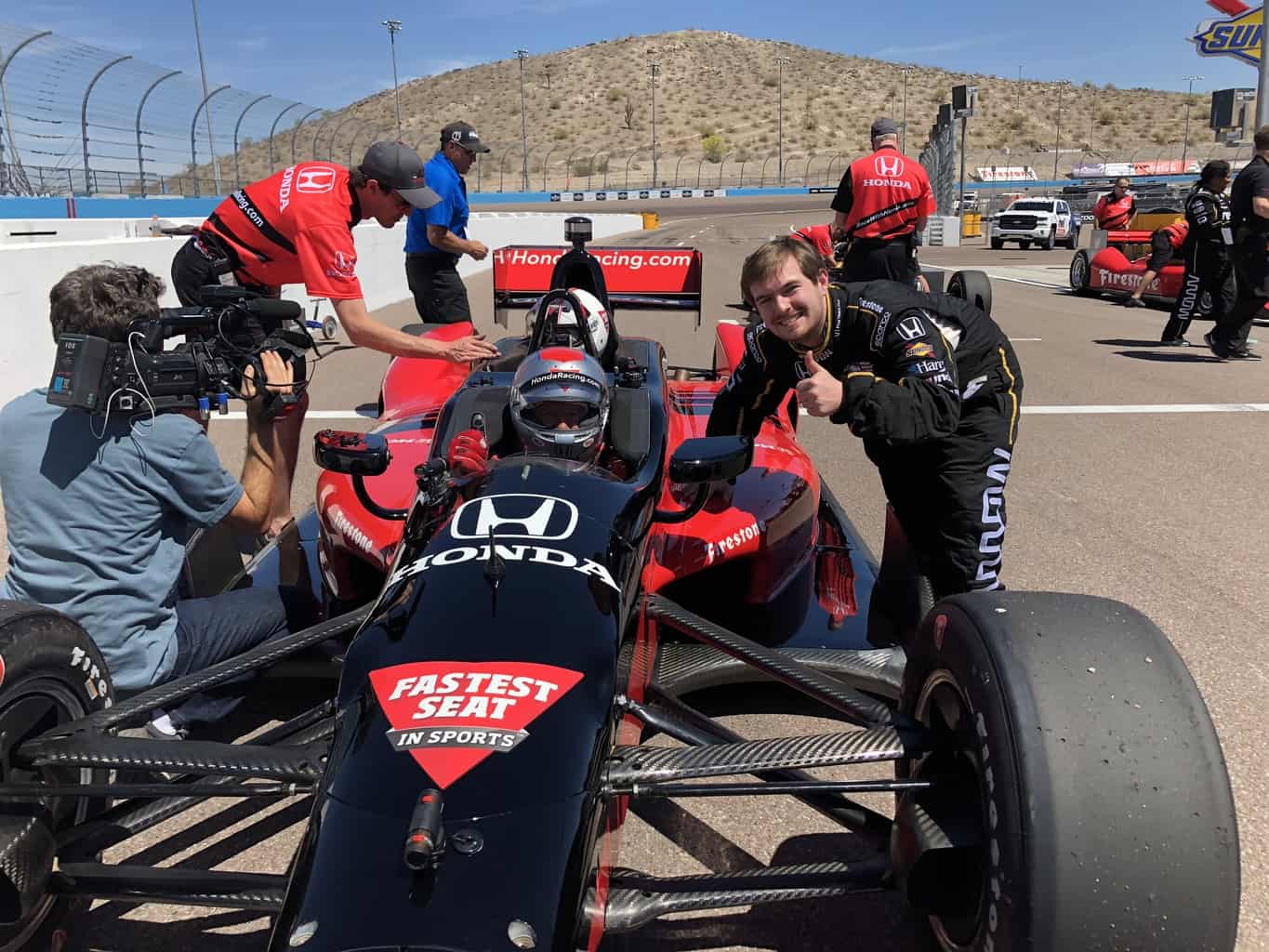 On Saturday afternoon, I went for a ride in a two-seat Indy car at ISM Raceway before the Desert Diamond Phoenix Grand Prix.

Obviously, it was an exciting experience that not many people get to have, so I’ll try to explain what I was feeling, both physically and mentally.

When I climbed into the car, I was dressed in a fire suit with gloves, a head sock, and a helmet. It wasn’t exactly the most comfortable apparel to wear in the hot desert weather, but I still thought it was neat to be in the type of suit that the drivers use. My particular suit had James Hinchcliffe’s livery on it.

Juan Piedrahita, a 25-year-old Colombian who’s competed in Indy Lights the last four years, was my driver. I sat behind him, and he took me for the fastest two laps of my life.

Getting strapped into the car involves a lot. The seat belts go over your body, and the harness behind your head and neck doesn’t allow much movement once you’re buckled in.

Some of the other people who went for rides in the two-seater were nervous or scared, but I wasn’t at all. It was a pure adrenaline rush, and I wanted to keep going and going once Piedrahita stepped on the gas.

We went around the one-mile oval at speeds near 170 mph. It was like a roller coaster ride. Two laps took about 45 seconds to complete.

What impressed me the most was the intensity of the g-forces. Think about when you make a sharp left turn in your car. The inertia causes your body to want to swing to the right in your seat. Now imagine that, but more than six times stronger and lasting for seven or eight seconds.

If I were a racecar driver, I’d think that trying to concentrate on driving would be most difficult because you must ignore the weight you feel on your body as you go through the turns. After a few hours of racing, the side of my body and neck would probably feel pretty sore. But that’s why racecar drivers are usually physically fit and can handle that sort of stress.

Would I go for a ride again? Absolutely. I wish I could go for a ride in a stock car and a Formula One car too. Heck, I’d like to try driving a racecar at some point in my life.

Overall, it was an experience I’ll never forget. It’s hard not to be jealous of the individuals who get to go that fast for a living.