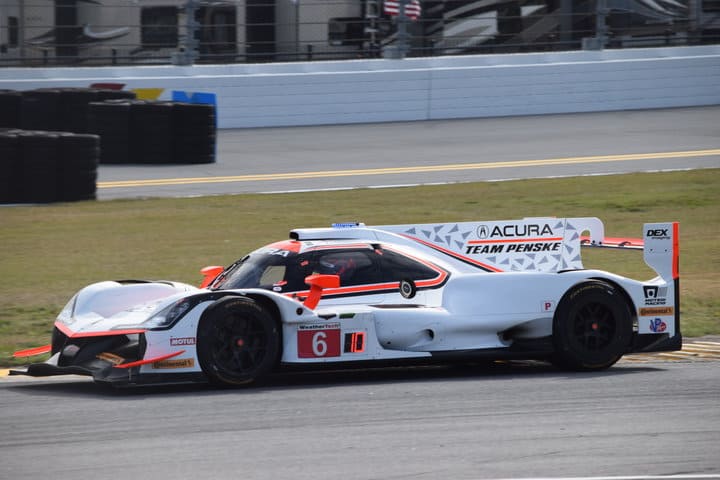 Acura Team Penske’s Juan Pablo Montoya came out to play on Friday afternoon in Long Beach.  After topping the charts in Practice No. 2, Montoya turned in a lap of 72.922 seconds (97.156 mph) to win the pole for Saturday’s BUBBA Burger Sports Car Grand Prix at Long Beach.

To Montoya, snagging the pole and throwing the Acura ARX-05 around is nothing but pure fun.

“Acura and Team Penske has done such a good job on the car this weekend,” Montoya said after qualifying.  “.”It’s the most that reminds me of driving a Formula 1 car, you can hustle it around and you still have to manage it.  So it’s a lot of fun.”

Montoya’s pole time was nearly two-tenths of a second faster than Action Express Racing’s Felipe Nasr in the Whelen Cadillac DPi-V.R.  Mazda Team Joest’s Harry Tincknell will start third, followed by Helio Castroneves in the second Acura.  Jõao Barbosa in the No. 5 Cadillac will start fifth.

The No. 85 ORECA 07-Gibson for JDC-Miller MotorSports did not set a time after grinding to a halt during the second practice session.  Simon Trummer will have to start the race on Saturday from the rear.

In GT Le Mans, Porsche GT Team’s Laurens Vanthoor dominated much of the session, posting faster and faster times.  However, Vanthoor pulled in with two minutes remaining.  That was more than enough time for Ford Chip Ganassi Racing IMSA’s Joey Hand to operate.

On his final lap of the session, Hand posted a time of 76.869 seconds (92.167 mph) to snatch the pole away from Vanthoor with the checkered flag out.  The lap was one-seventh of a second faster than Vanthoor.  Patrick Pilet was third quickest in the No. 911 Porsche.  Corvette Racing’s Jan Magnussen was fourth quickest, while Oliver Gavin will start fifth in class despite having three laps invalidated for track limit issues.

Coverage of the BUBBA Burger Sports Car Grand Prix at Long Beach will air live Saturday afternoon at 4 p.m. on FOX.  Not all affiliates will air the broadcast.  Check your local listings for potential alternate places to see the race.