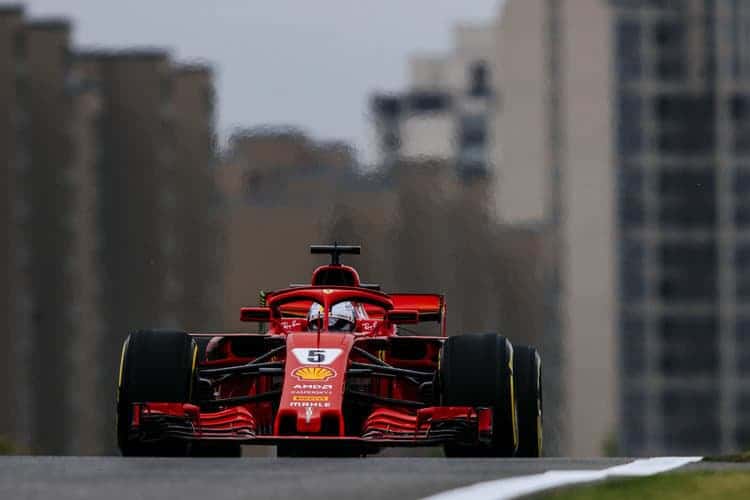 This weekend, Formula 1 will be racing at Shanghai International Circuit, which is also a way of stating that the third race of the season is the Chinese Grand Prix.  One of the focal points of the race last year was Max Verstappen’s drive from the 16th starting spot to third. That story did take some headlines, but one of the key aspects was the weather.

This race weekend is another when the weather may be a bit suspect.  At the very least, the notion of sunny skies and beautiful racing conditions will be an abstract one as practices and qualifying have been held under gray conditions that have been rather cool, in the upper teens for celsius users and mid-60s for Fahrenheit adherents.

That doesn’t seem like much of a big deal – doesn’t the rain pour down on every other British GP at Silverstone?

The issue here is that if the sport is focused on establishing itself in China, putting on a more fan-friendly experience has to play into the scheduling, and maybe it’s time to push this date back a few weeks.  This column isn’t about to go on a schedule rant but it is instead pushing for more consideration of when to hold the race as conditions have seemed to be a notable issue. That a practice session last year ran for just a few minutes before being scrapped because of fog, which meant the safety helicopter could not fly, works as a primary example but his weekend serves as one that illustrates how a change might be warranted.

– Sebastian Vettel earned the pole position for the Chinese Grand Prix after ripping off a beautiful lap that pipped his teammate, Kimi Raikkonen.  Raikkonen thought he had P1 in the bag but instead he will start second to Vettel for a second consecutive race. That makes another Ferrari lockout on the front row.

But whither Mercedes?  The cooler temperatures were supposed to favor the Silver Arrows which had made them the favorites for the pole.  Since 2013, Mercedes has been a dominant force in the sport, finishing second that year in the Constructor’s Championship, then winning four straight after.  During that span, they won, 2, 16, 16, 19, and 12 races. The 2013 season, when they “only” won two races was the beginning of their form.

This season, however, has shown no sign of the dominance they have sustained.  Their cars are still good, obviously, but they’re not running away from the field in practices or qualifying as they have usually done.  These trends, accompanied by another Ferrari front row, are what led commentator and former champion (1996) Damon Hill to remark that this seems to be the fall of the Mercedes empire.

– Just what the, fill in your expletive here, is going on over at Red Bull?  Max Verstappen is having trouble keeping his car on track. Daniel Ricciardo is having trouble just being able to drive – through no fault of his own.  And overall, for a team of this position, they just feel like they’re in trouble.

The team is having issues with both their reliability and their handling, and the latter is one that is particularly surprising.  It feels like if they could get their act together they would be able to contend for the podium but too many miscues have left them adrift, especially after the double retirement in Bahrain.

This weekend didn’t start much better as Verstappen struggled in the first practice and Ricciardo blew his engine in the third.  They recovered to take the fifth and sixth spots to start the race but everyone involved must be feeling a bit tense right now

– It wasn’t so long ago that the Williams organization tended to fight for third in the pecking order, fighting with Force India and Red Bull.  That seems like ages ago. While it should be noted that their drivers, Lance Stroll and Sergey Sirotkin, are just 19 and 22 years old, respectively, their drop to the rear of the field has seemed more ominous than something that can just be brought on by youthful inexperience behind the wheel.  Whether or not they will be able to move forward this year is likely at risk and watching this team struggle both with performance and financially will be something worth watching as the season progresses.

– Fans of F1 in the U.S. can feel elated.  The reason is that the strange marriage between ESPN and Sky Sports which has brought the races this season has produced a notable fruit: for the remainder of the season, qualifying and races will be broadcast commercial free.  This announcement is a wonderful one as the first broadcasts have been marred by ill-timed commercial breaks and an overall sense of clunkiness. This change may also set a precedent in motorsport for more races to be shown in a similar fashion.

The Shanghai International Circuit is another track on the schedule where the history is a recent one as F1 saw China as another market worth opening.  The discussion to hold a Chinese GP began in the 1990s which was then followed by a period of intense activity in the early aughts, as the track became a settled idea and then in 2003, over 3,000 engineers set to work turning the swampland of the area into a suitable F1 track that then opened in 2004.  The race has been held each consecutive year since. The track is just under 3.4 miles in length and features 16 turns and is based on the Chinese character Shang, 上, the first letter in Shanghai and means high, above, or ascend.  Lewis Hamilton leads all drivers with five wins at the track and is also the defending race winner.

Hard to believe that Ferrari may have finally produced a car that can consistently carry the fight to Mercedes. Early days yet but we shall see.
As for the broadcasts. While indeed there have been issues, the coverage has several points that nascar fans would appreciate. A willingness to show battles on the track, whereever they are found rather than following the leader, and true passion for the sport, rather than just insulting your intelligence.