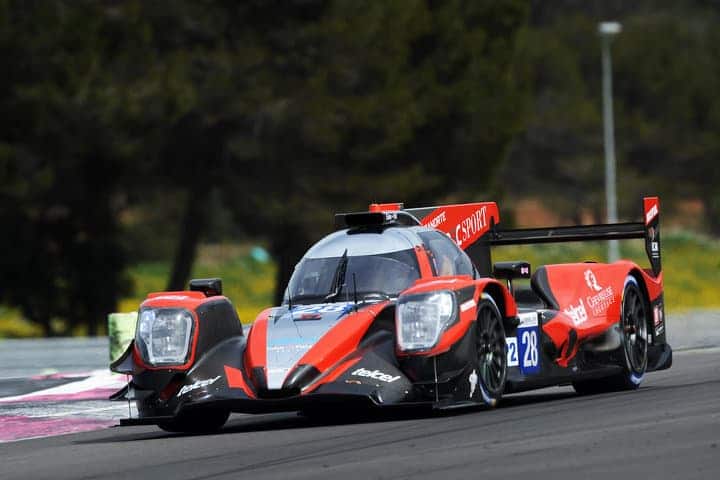 IDEC Sport’s Paul-Loup Chatin claimed a surprise pole Saturday (April 14) for Sunday’s 4 Hours of Le Castellet with a lap of 101.194 seconds (128.000 mph) around the 3.598-mile Circuit Paul Ricard.  It is the fastest lap of the entire race weekend and nearly three seconds faster than Chatin was able to accomplish during Free Practice No. 2.

The top six qualifiers were in ORECA 07 chassis.  Panis Barthez Competition’s Will Stevens was the fastest non-ORECA in seventh with his Ligier.  SMP Racing’s Egor Orudzhev was the fastest Dallara in ninth.

The session was stopped after four minutes due to United Autosport’s Bruno Senna stalling on course with an apparent electrical issue.  Senna was able to get his Ligier JS P217-Gibson back to the pits without assistance.  He would eventually get the car restarted and qualified 17th.

In LMP3, M. Racing-YMR’s David Droux claimed the class pole on his final lap with a time of 111.930 seconds (115.722 mph) in his Norma M30.  Droux’s time, which was good enough for 20th overall, was six-hundredths of a second faster than Ultimate’s Matthieu Lahaye.  DKR Engineering’s Alexander Toril will start third in class, while RLR MSport’s Job van Uitert will start fourth in the fastest Ligier JS P3.  United Autosports’ Sean Rayhall will start fifth.

Cairoli’s lap was two-tenths of a second faster than Gulf Racing UK’s Ben Barker in another Porsche.  Miguel Molina was third quickest in the JMW Motorsport No. 66 Ferrari, nearly 1.2 seconds off of Cairoli.  Dennis Olsen will start the No. 77 Porsche in fourth, while Andrea Bertolini will start fifth in the Krohn Racing Ferrari.

The 4 Hours of Le Castellet is scheduled to go green at 6 a.m. Sunday morning.  The race will be streamed live at a number of locations.  They include EuropeanLeMansSeries.com, the series’ YouTube channel, and MotorTrend OnDemand.