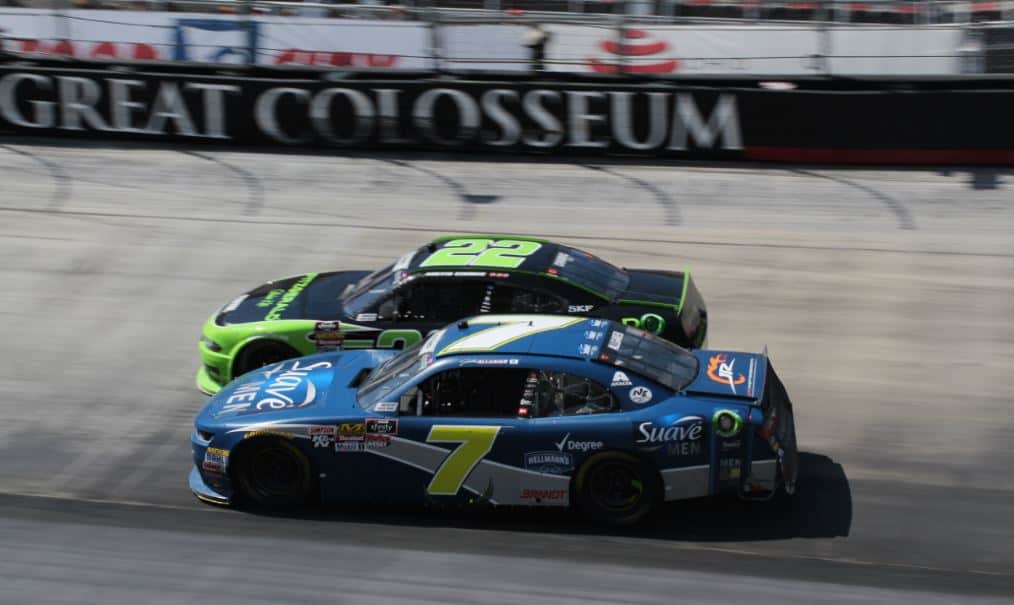 Through all the chaos in Saturday’s XFINITY Series race at Bristol Motor Speedway, Justin Allgaier seemed to experience about all of it. From spins, wall contact, bumpers and more, Allgaier capped it off with a comeback, finishing second behind race-winner Ryan Preece.

Entering the weekend with what Allgaier believed was a solid No. 7 JR Motorsports Chevrolet, the Fitzgerald Glider Kits 300 added a few speed bumps to his hopeful run to Victory Lane.

Leading the opening 47 laps, it went downhill quick when Allgaier made contact with Matt Tifft, spinning the No. 2 driver on the backstretch.

“I owe Matt an apology,” Allgaier admitted. “I got a good run off the corner, good inside and — the lane he was running, I clipped the apron, shot me up into him.”

From there, Allgaier experienced a wicked run through the pack… a couple times. His progress was stumped on lap 102 when he spun off Turn 2, hitting the inside wall. The minor contact broke the front splitter and affected the handling of his Chevy from then on.

“I tried to give it away a couple times,” he said. “Trying to get into the field was insane. We spun out, got the inside wall, that took the splitter off mostly in the left front. For us trying to get to the end, I thought we had a car better than second, even.”

But he came back. The 2010 Bristol winner was in position for victory on the race’s final restart with 10 laps to go, jumping to the second spot with Preece in his windshield. Unfortunately for Allgaier, the race win was gone. However, he did exit with a spot in the Dash 4 Cash next weekend at Richmond Raceway.

“I made the mistake and unfortunately it cost us to be up there in Victory Lane,” he said. “It was disheartening to come into this weekend not a part of [the Dash 4 Cash] so to lock our way in next week is always good.”