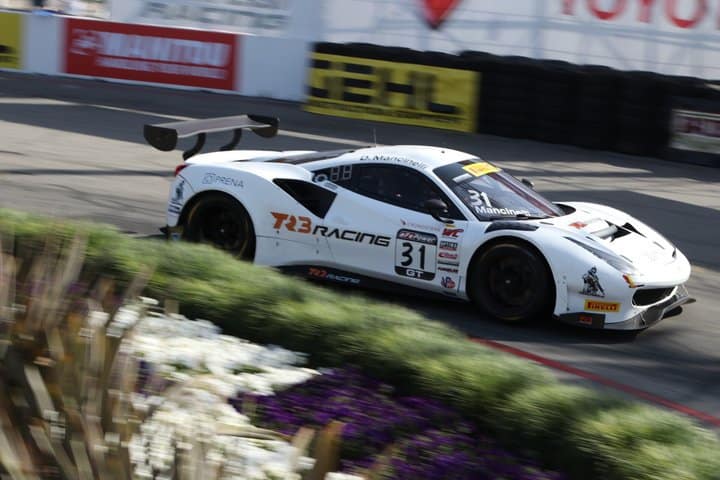 This year’s Pirelli World Challenge Sprint in Long Beach came down to the final 10 minutes.

TR3 Racing’s Daniel Mancinelli snatched the lead in a somewhat rough fashion from R. Ferri Motorsport’s Toni Vilander with 7.5 minutes to go.  From there, Mancinelli pulled away to take his first PWC Sprint victory in Long Beach Sunday (Apr. 15).

“I knew Toni [Vilander] would have a good race pace today with his Ferrari,” Mancinelli said after the race.  “I was able to close in on him after the yellow flag period. Felt I was quicker than Toni in several spots, but I had to work hard to get close enough to make the pass. I made the move for the lead after I got some good momentum into turn 1. Toni left a little opening for me and I had to take it. From there, I managed the car to the finish. It is a great win for Ferrari and TR3 Racing.”

Vilander was dominant early on from the pole.  No one could touch the veteran racer as he opened up a decent advantage on the field.

It was only after lapping began that the field closed up.  The slowest car in the field was a GTS Invitational Porsche Cayman GT4 Clubsport MR driven by Mike Sullivan.  Those at the very front of the field lapped Sullivan just fine, but Alec Udell was way too aggressive.  After passing Sullivan, Udell cut into front of the Porsche, hitting him.  The result was a nasty hit.

Sullivan did exit the Porsche under his power, but appeared to be sore afterwards.  The impact broke a section of wall, resulting in a long yellow.

For his part, Udell was given a stop and 60-second hold penalty for causing the crash.  He would eventually finish 13th overall, one lap down.

The yellow put Daniel Morad on Vilander’s tail.  However, a mechanical issue caused Morad to drop back, putting Mancinelli in position to pounce.  After Mancinelli made the pass, he pulled away to take the win.

Mancinelli beat Vilander by 2.179 seconds.  K-PAX Racing’s Àlvaro Parente was a distant third, followed by Scott Hargrove in the Pfaff Motorsports Porsche.  Michael Christensen finished fifth in GT but 11th overall after being penalized for spinning out Hargrove with 10 minutes to go.

In GTA, Dream Racing Motorsport’s Yuki Harata ran what was likely the best race of his career.  Starting on the class pole, he led nearly the entire race with Squadra Corse Garage Italia’s Martin Fuentes right on his tail.  As a number of the other drivers faltered, Harata was in position to nearly grab an overall podium.

Then, things got crazy.  Harata was fourth overall and holding onto the class when Fuentes made a move to the inside at turn 6.  Contact was made and Harata backed into the tires.  At the same time this incident happened, Hargrove ran in the back of Fuentes. The contact also broke a suspension part on Fuentes’ Ferrari.

Fuentes’ car was crabbing down Seaside Way and unable to keep the pace.  Harata, however, was able to recover from his spin and retake the class lead right at the line to win.

In the GTS Invitational, Compass Racing’s Paul Holton led flag-to-flag to take the win. For the last portion of the race, he was hounded by Racers Edge Motorsports’ Harry Gottsacker, a driver who had to come from the rear of the field.  But the McLaren 570S GT4 was more than enough to hold off the SIN to win.

Pirelli World Challenge teams will now take a week off before traveling to Virginia International Raceway for the second SprintX weekend of the season.  All classes will be in action over three days of competition on the road course.