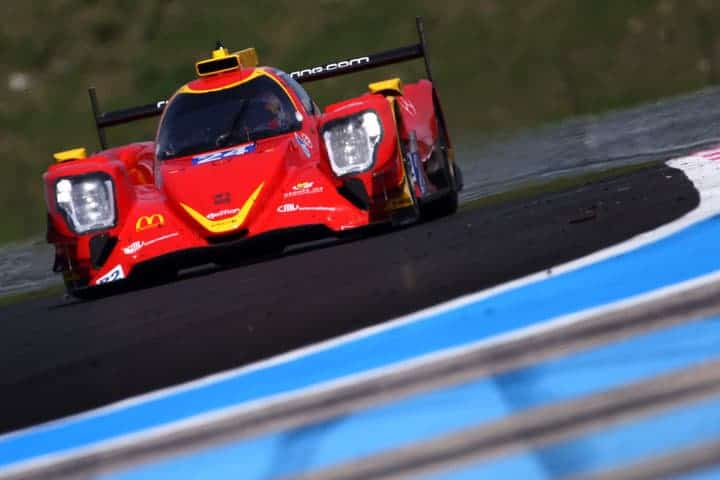 The Racing Engineering ORECA 07-Gibson shared by Norman Nato, Paul Petit and Olivier Pla earned a somewhat unexpected victory in Sunday’s European Le Mans Series 4 Hours of Le Castellet at Circuit Paul Ricard.  It is the team’s first-ever start in the LMP2 class.  Previously, they were best known for fielding entries in the FIA Formula 2 Championship (formerly known as the GP2 Series).

IDEC Sport’s Memo Rojas led the 45-car field to the green, but lost the lead almost immediately to DragonSpeed’s Nicolas Lapierre.  Lapierre led through the first round of stops all the way to lap 42, nearly 75 minutes in.  At that point, Lapierre cut his left front tire and was forced to pit.  During that stop, Lapierre got out and Henrik Hedman got in for his stint.

Unfortunately, Ben Hanley never got to get into the No. 21 ORECA 07 on this day.  Just before the halfway point, Hedman collided with Spirit of Race’s Duncan Cameron in the No. 55 Ferrari.  Hedman spun through the vast runoff and nosed into the Armco barrier, ending both his day and Cameron’s.

When Lapierre pitted, Nato claimed the overall lead.  When he pitted and got out of the car in favor of Petit, the team was able to maintain the lead.

Ultimately, the race came down to a battle between Pla in the Racing Engineering ORECA 07 and the TDS Racing ORECA 07 of Matthieu Vaxivière.  In the closing laps, Vaxivière used traffic to close up from nine seconds back to within three seconds.  However, the additional traffic in the last couple of laps allowed Pla to extend his advantage.

The margin of victory was 4.827 seconds over Vaxivière, Loïc Duval and François Perrodo.  Third was Duqueine Engineering’s No. 29 ORECA 07 for Nicolas Jamin, Nelson Panciatici and Pierre Ragues, followed by G-Drive Racing’s Alexandre Imperatori, Andrea Pizzitola and Roman Rusinov.  The Signatech Alpine A470 of Thiriet and André Negrão was fifth.

The first non-ORECA 07 home was the Panis Barthez Competition of Timothé Buret, Julien Canal and Will Stevens.  The Ligier JS P217-Gibson finished eighth, one lap down to the winners.  Even with the “Joker” modifications made to the Dallara and Ligier chassis, they’re still searching for what they need to match the ORECA 07.

In LMP3, M. Racing-YMR’s David Droux started on pole, but quickly lost his advantage to Ultimate’s Jean-Baptiste Lahaye.  However, the star in the early part of the race was RLR MSport’s Job van Uitert, who made his debut in the No. 15 Ligier JS P3-Nissan.  Uitert started fourth, moved up to second on the first lap, then immediately took the battle to the Ultimate Norma M30.

On lap 4, Uitert was able to take the lead away from Lahaye.  United Autosports’ Sean Rayhall followed past into second.  Once out front, Uitert pulled away from the rest of the pack.

Much of the rest of the race was based on pit strategy.  The RLR MSport No. 15 used one strategy, while another was used by the EuroInternational No. 11 shared by Giorgio Mondini and Kay van Berlo.  Depending on where they were in the cycle, either team would be up front.

RLR MSport made their final stop with 66 minutes to go and planned to go to the end with Robert Garofall driving from that point on.  A 66-minute is longer than normal, but Garofall was able to stretch the fuel to the finish to take the win.

The margin of victory for Garofall, John Farano and Uitert was 32.021 seconds over the No. 19 M. Racing-YMR Norma M30 of Droux, Nicolas Ferrer and Lucas Légeret.  Mondini and van Berlo were third, followed by Ross Kaiser, James Swift and Terrence Woodward in the 360 Racing Ligier.  United Autosports’ Rayhall and John Falb were fifth, 90.6 seconds back.

The GTE class had the best run to the finish.  The race ultimately came down to a duel between Proton Competition’s Matteo Cairoli and JMW Motorsport’s Miguel Molina.  Cairoli’s No. 88 Porsche led most of the race, but Molina ran him down in the closing laps.

On the final lap, Molina executed an over-and-under move just before the long Mistral straight.  Molina was able to get the position on Cairoli, then contact was made between the two drivers.

Cairoli ended up in the runoff, then drove through the runoff to get back in front of Molina.  Molina then used the tow on the Mistral (more than one mile in length) in order to get back past.  Cairoli tried everything over the final half a lap to get back to the lead, but could not prevent Molina from giving JMW Motorsport the class win.

Molina, Alex MacDowall and Liam Griffin‘s margin of victory was 0.835 seconds over the Porsche of Cairoli, Gianluca and Giorgio Roda.  A lap back in third was the EBIMOTORS Porsche of Fabio Babini, Raymond Narac and Riccardo Pera.

The European Le Mans Series returns to action at the Autodromo Nationzale Monza for the 4 Hours of Monza on May 13.  Like Sunday’s race, the event will be available via livestream on YouTube.