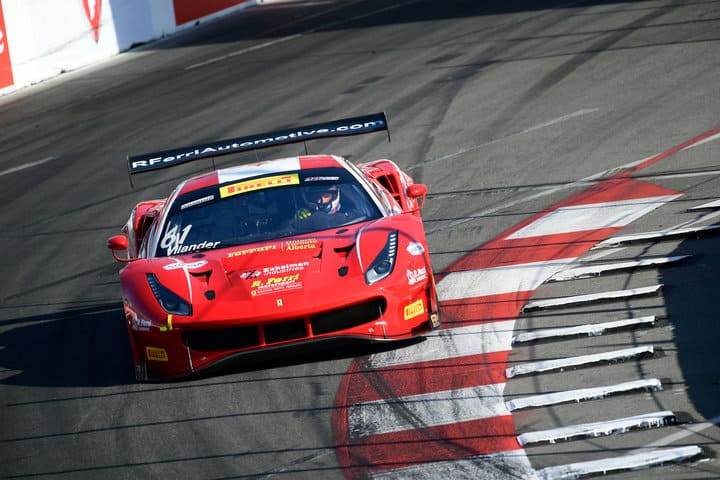 R. Ferri Motorsport’s Toni Vilander set a PWC track record with a lap of 78.436 seconds (90.326 mph) Saturday (April 14) en route to earning for Sunday’s Grand Prix of Long Beach.  It is Vilander’s second Sprint pole of 2018, having previously won the pole for Round No. 1 at St. Petersburg.

Vilander’s lap was two-tenths of a second faster than CRP Racing’s Daniel Morad in the lone Mercedes.  TR3 Racing’s Daniel Mancinelli upped his performance from 2017 and will start third in his No. 31 Ferrari.  Alec Udell will start fourth, while Alegra Motorsports’ Michael Christensen will start fifth.

In GTA, Dream Racing Motorsport’s Yuki Harata surprised a number of onlookers by winning the class pole with a lap of 79.157 seconds (89.503 mph).  The session did not pass without trouble, though.  Harata slid into the the wall while trying to improve and bent a rear wing endplate.

In the GTS Invitational, Compass Racing’s Paul Holton topped the chart with a lap of 85.930 seconds (82.449 mph).  Holton’s McLaren was three-tenths of a second faster than Harry Gottsacker in the No. 69 SIN R1 GT4 for Racers Edge Motorsports.   Unfortunately, Gottsacker’s car failed post-qualifying technical inspection.  As a result, Gottsacker will have to start at the rear of the field.

The Grand Prix of Long Beach is scheduled to go green at 12:50 p.m. EDT Sunday afternoon.  It will be streamed live at World-Challenge.com.  The race will premiere on CBS Sports Network on April 22 at 3 p.m.