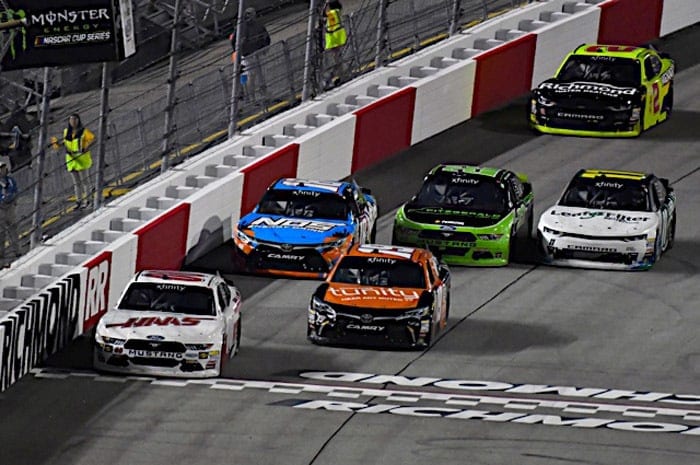 The NASCAR XFINITY Series heads to the Richmond International raceway for the first night race of the year, and the second short track race in a row.  This is also the second Dash 4 Cash Race, which means no Cup drivers will be entered this weekend.  40 cars make up this week’s entry list, so everyone who qualifies, will race.

Making his season Richard Childress Racing debut will be Jeb Burton in the No. 3 car.  Burton has yet to race this season, and has been in and out of the sport the past several seasons.  His last race in NASCAR was in the Camping World Truck Series last October at the Martinsville Speedway, where he scored a 26th-place finish.  He started 6 races for JGL Racing last season in the XFINITY Series, and scored a best finish of 4th at the Daytona International Speedway in July.

Noah Gragson will make his NXS debut for Joe Gibbs Racing in the No. 18 car.  Gragson currently races for Kyle Busch Motorsports in the Camping World Truck Series and has one career win, that coming at the Martinsville Speedway last October.

Austin Cindric and John Hunter Nemechek will return to their respected rides from last weekend, Cindric in the No. 22 for Team Penske, and Nemechek in the No. 42 for Chip Ganassi Racing.

Chase Briscoe returns to the No. 60 car for Roush-Fenway Racing after driving for Biagi-DenBeste Racing last weekend at the Bristol Motor Speedway.

Brandon Brown will make his first start since the season opening race at the Daytona International Speedway in the No. 90 car for DGM Racing.  Brown was caught up in a wreck and finished 36th in the race at Daytona.

The 4 drivers going for the $100,00 Dash 4 Cash prize this weekend will be Daniel Hemric, Elliott Sadler, Spencer Gallagher, and Justin Allgaier.

Opening practice takes place on Friday April 20 at 8:00 A.M ET with no TV coverage.  The green flag waves on Friday night April 20 at approximately 7:14 P.M ET with coverage on FoxSports 1.