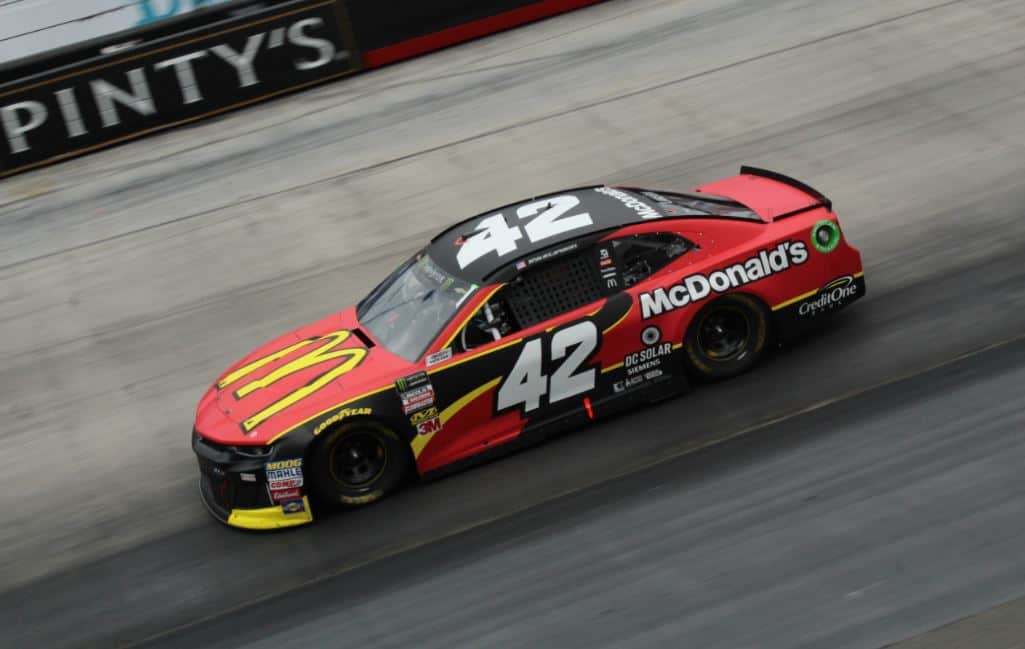 Kyle Larson walks away from Bristol heartbroken once again.

Twice this season, the driver of the No. 42 Chevrolet has finished runner-up, including Monday’s rain-delayed Food City 500. But this one may sting just a little more for Larson, who led a race-high 200 laps, only to lose the top spot to eventual winner Kyle Busch with just six laps remaining.

“I’ve been beaten by Kyle (Busch) about every time I race here, so that gets frustrating after a while.”

For Larson, it wasn’t an easy journey to an almost-win. Taking the lead for the first time on lap 131, he held the top spot while the cars sat covered on pit road on a rainy Sunday night. And it wasn’t until near the end of the second stage that he relinquished the lead to eventual stage winner Brad Keselowski.

Fast forward to deep into the third stage and Larson spun out of the lead after contact with Ryan Newman.

Take another look at the contact between @RyanJNewman and @KyleLarsonRacin.

The restart is coming up next on FOX. pic.twitter.com/LTkWdmhZhL

Despite the spin, Larson managed to recover and retake the lead on lap 439 and even pulled out to a more than six second lead before the final caution flew with 30 laps remaining. A spirited battle with Ricky Stenhouse Jr. on the restart, combined with lapped traffic as the leaders caught the back of the field, allowed Busch to reel in Larson and ultimately take the top spot with just six laps remaining.

Larson held on for second but was clearly dejected after the checkered flag flew.

“I was really, really good on that long run. And yeah, as soon as we restarted there, I was extremely loose,” Larson said after the race. “I just really didn’t have any grip. I thought it would tighten up for me and I could get going, but it never really did and I was just really loose. I hate that I didn’t win. It’s another one at Bristol.”

Larson now sits ninth in the standings as the series heads off to Richmond Raceway next weekend, where he won last Fall after leading 53 laps.