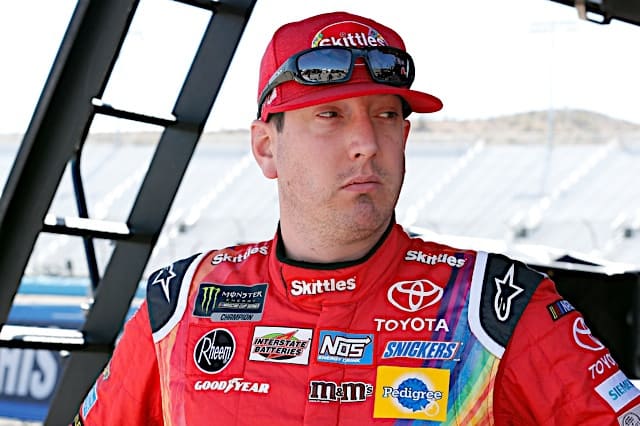 Kyle Busch is the winningest active driver at Bristol Motor Speedway. He grabbed the win today to make it two in a row in 2018 and two in a row at Bristol. Busch led a race high five times for 117 laps, second only to Kyle Larson. Brad Keselowski won the first two stages of the race but had a late race part failure and flat tire that took him out of contention. Darrell Wallace Jr. led his first laps of his Cup career, finished 16th and won the Rookie of the Race.

Kyle Busch started the race on the pole and led the first 16 laps before Ryan Blaney passed him for the top spot. Blaney led all but one of the next 101 laps before being caught up and taken out in a multi-car crash on lap 118. Keselowski’s team made a strategy call that put him out front as the race went back to green before the lap 125 end to stage one. Once the race returned from the stage one break, Larson dominated the race for 113 laps. During that time was the red flag that led to the postponement to Monday. When the cars got back on track, multiple teams pitted, including Keselowski taking left side tires. He ended up riding the momentum from that decision to retake the lead on lap 244 to lead through the end of stage two.

Denny Hamlin took the lead thanks to another strategy call coming out of the stage two break before Keselowski regained the top spot. Larson took the top spot again but was spun by Ryan Newman when the No. 42 tried to pull down across the nose of Newman into a spot that wasn’t there on lap 324. Over the remainder of the race, Kyle Busch led 101 of the last 175 laps, with Larson leading 55, Keselowski nine, Wallace Jr. six and Daniel Suarez five. The final run after Keselowski’s issue was a 22 lap affair. Larson led the first 16 of them but Busch got to his back bumper, gave him a shot that moved him up the track, and drove under for the lead and, ultimately the win. The race saw 13 cautions for 114 laps and eight leaders exchanging the lead 18 times.

Fans have been complaining for years that Bristol lost its luster when they repaved the track and the upper groove became the preferred line. The PJ1 compound was applied last year to make the bottom groove more inviting but it didn’t last the whole race. Eventually the top became the fast way around. Thanks to the weather delay and cool temperatures, the track was able to refresh the compound before Monday’s activities which resulted in the bottom remaining the top priority for most of the day. Fan attendance was a hot topic all weekend but if they watched the racing Sunday and Monday, they have no reason to stay away.

Fans, or more accurately, seats without fans was the huge topic after Sunday. The horrendous weather forecast exacerbated an already deteriorating attendance situation at Bristol. The spring race at the historic half-mile has been less than a sell-out for several years and the attendance number has continued to decline over the last few seasons. Throw in a forecast for 100% chance of rain and the fans stayed away in droves. The delay to Monday obviously didn’t help the situation at all. Hopefully the fantastic racing on Monday will spur many of them to come back next year.

With the stands woefully empty on Sunday and the action postponed to Monday, you’d think that Bristol would do anything they could to get some bodies in the stands for the rest of the race. Obviously they lost a boat load of money but every little bit would help salvage the weekend. However, when asked on Twitter if fans could show up on Monday for the final 283 laps the speedway responded that fans were welcome to show up and purchase a full price ticket. It would seem that a more prudent approach would have been to invite anyone and everyone who wanted to see a couple hundred laps of racing to come over and check out what Bristol Motor Speedway had to offer.

Our friends at Kickin’ the Tires reported this week that Chevrolet is apparently requesting a change to the nose of the Camaro for the XFINITY series. With the 2019 production Camaro coming out matching the race car to the production car is important for those that are trying to sell the cars to the public. It is also important for the teams who feel they’re at an aerodynamic disadvantage with the current nose on the car. It is a decent bet that if it is changed in XFINITY, it will trickle up to the Cup series as well eventually.

On Tuesday April 24th and Thursday April 26th, fans will be allowed to drive their passenger cars around Talladega Superspeedway for three laps at a cost of $50. The event will take place from Noon until 4:00 PM on the 24th and 10:00 AM through 2:00 PM on the 26th. There are rules that must be followed expressly by participants or they will be asked to leave the track and the property. For more information, call 855 518-RACE.

The All-Star race is often a testing ground for ideas that might be later implemented in the Cup series. This year is no different as it was announced this week that restrictor plates will be utilized at the annual exhibition event at Charlotte Motor Speedway. After the implementation of the plates for the XFINITY series at Indianapolis last year, the series is going to see what it might do for competition on a mile and a half track. Let’s all hope we don’t have a giant pack of cars who can’t get away from each other and end up tearing up a boat load of them. As for the actual race, it will be a standard stage race like the current format of all Cup series races.

Monster Energy has agreed to sponsor the Cup series for one more year. It is most likely going to be the final year of the partnership, but at least the sanctioning body knows that the green M will be back for another year and can start focusing their energies at finding a replacement for 2020.

Felix Sabates has taken his name out of the ring for consideration to purchase the Carolina Panthers. Apparently the price tag has exceeded what Sabates feels is a fair amount for the NFL franchise.

Keselowski took the first two stages this weekend, over two days. He was in the mix as the laps ticked off in the final stage but felt as though something was going wrong. With 30 laps to go the left front tire on the No. 2 went down and Keselwoski bounced off of the wall. He was already two laps down when the incident happened. He ultimately finished the race five laps down in 23rd after having a car that was contending for the win.

Blaney took the lead from Kyle Busch on lap 17. Joey Logano was credited with leading lap 56 under the first caution for weather, while Blaney lead the other 100 laps from lap 17 through 117. Unfortunately for Blaney, his chance to win was eliminated when Trevor Bayne and Chris Buescher got together, ultimately collecting Harrison Rhodes who took out Blaney on lap 118. The poor luck for Blaney was a portent of what happened to Keselowski as well, with two of the three Team Penske cars garnering disappointing finishes with cars that could have potentially won the race.

If you have listened to the Fronststretch podcast this year, you know we’ve been very hard on Roush Fenway Racing. They have deserved it because they have been awful all year. However, we have seen it in the past and it came true again this weekend. When Ricky Stenhouse Jr. needs a good run, Bristol always serves him well. He knows what feeling he needs in the car and he manages to get it by the end of the race every time. We’ll see if this carries over to Richmond.

In the most unnoticed great run of the weekend, David Ragan was the last car on the lead lap and finished in 12th place in the No. 38 for Front Row Motorsports. Ragan is known as a great plate racer but hasn’t done much on non-plate tracks. This finish is his best on a track not named Daytona or Talladega since a sixth place at Martinsville in the spring of 2015. With his teammate wrecking out and only completing nine laps, it was a great run for the whole team.

Austin Dillon, Kevin Harvick, Martin Truex Jr., Clint Bowyer and Kyle Busch are the five race winners in seven races of 2018. Assuming there are 16 or fewer unique winners in the regular season, they will be locked into the playoffs based on winning a race. Harvick and Busch are locked into the playoffs thanks to two victories, assuming they attempt the remaining races in the regular season.The remaining drivers who would qualify for the playoffs and their associated playoff points:

A rain-delayed race usually means drivers logging laps to try and get to halfway so that everyone can get home. The situation Monday basically set the table for everyone racing hard to get to the end of stage two and then they were never sure when it might rain.

In the end, we ran the whole distance, drivers had different strategies and we had a pass within 10 laps of the finish of the race, with a bump and run, to decide the win. There was really nothing else you could ask for from the race outside of a photo finish. This one gets five ice cold Piedmont Pilsners from Bristol Station Brews and Tap Room. It was the best race of the season so far.

Another short track comes up for the Cup series next Saturday night, April 21st. Richmond Raceway will welcome fans to their remodeled facility at 6:30 PM Eastern on Fox. It can also be viewed on the FoxSportsGo app. If you’re like to listen to the racing it is available on your local MRN affiliate. It will also be on www.motorracingnetwork.com and SiriusXM NASCAR Channel 90.

Aric Almirola continues to prove that the only problem with 10 car for the last five seasons was the driver.

Once again the opportunities for wave arounds was minimal and there were only 12 cars on the lead lap by race end. That makes me happy because I like to see those that run well for the entire race get the finishes they deserve.

Loved seeing hints of the ‘old’ Bristol on track this weekend! It used to offer such a unique brand of racing until it was neutered by ‘improvements’. This weekend proved the ‘bump and run’ doesn’t have to be the ‘dump and run! Well done!