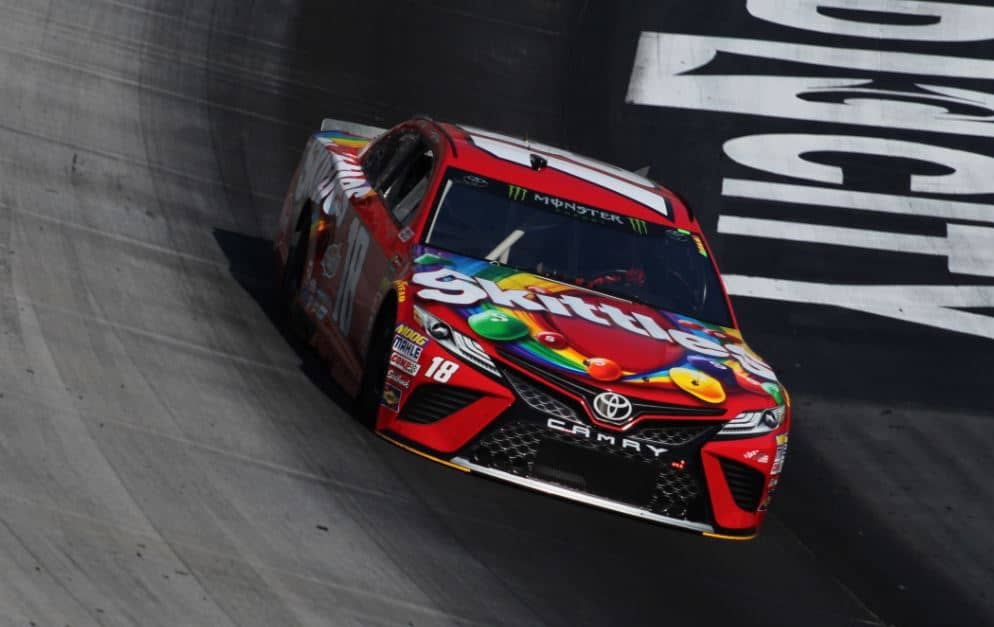 The Monster Energy NASCAR Cup Series headed to the Bristol Motor Speedway on Sunday (and Monday) for the second short track event of the year.

After completing 204 of the 500 scheduled laps on Sunday, the race was postponed to Monday afternoon due to rain. And despite the clearer radar, a combination of rain, sleet and snow delayed the restart. But the weather played nice long enough for the race to run to completion, and Kyle Busch emerged victorious for the second week in a row.

Last weekend at Texas, Busch had to hold off a chasing Kevin Harvick, but this time around, he was the one doing the chasing. A late-race caution for Brad Keselowski’s flat left front tire set up a short 22-lap sprint for the finish.

Taking the lead for the final time from Kyle Larson, who led a race-high 200 laps, with just six laps to go, the driver of the No. 18 Toyota had to make it through lapped traffic as the final circuits ran down.

“We weren’t quite as good as the 42 (Larson) on that long run before that last caution came out,” Busch said in victory lane. “We were able to get some tires on it and give it everything we had for that 20 lap shootout.”

A clearly disappointed Larson lamented losing the win after being so dominant.

“Hate that I didn’t win, it’s another one at Bristol,” Larson said after the race. “I’ve been beaten by Kyle (Busch) about every time I race here, so that gets frustrating after a while.”

Jimmie Johnson ended up third after threatening for the lead earlier in the race, followed by Ricky Stenhouse Jr., who made a spirited run at the lead on the final restart. Alex Bowman rounded out the top five.

Despite early damage to his No. 10 Ford, Aric Almirola recovered to finish sixth, followed by teammates Harvick and Clint Bowyer. Joey Logano and Ryan Newman rounded out the top 10.

Cautions were the name of the game at Bristol with the yellow flag flying 13 times for 114 laps.

This is Busch’s second consecutive win at the track after scoring the victory in the night race last August, and his seventh overall at Bristol. He remains the only Joe Gibbs Racing driver to score a win this season. Teammate Denny Hamlin led four laps early in the final stage but was forced to pit under green for a loose wheel. He spent the remainder of the race trying to recover from three laps down and finished 14th.

A lap 5 crash took out several contenders such as Chase Elliott, Martin Truex Jr. and Michael McDowell, who had his best qualifying effort of the season in ninth and had an extremely strong weekend before Sunday.

Ryan Blaney dominated the first 100 laps of the race on Sunday but was caught up in a wreck on lap 119, and it ended his day early on.

Two underdogs who recorded their best finishes of the year were David Ragan who finished 12th for Front Row Motorsports, and Landon Cassill who finished 20th for StarCom Racing.  Cassill’s result is the best ever for the team.

Frankly, I’m tired of FS staff constantly talking up their “underdogs.” McDowell’s good qualifying effort only put him in position to take out real contenders and of course, he lived up to his billing, getting all the way to Lap 3 before he wrecked. There is a reason some guys are driving for underfunded teams – they aren’t that good. The least these guys can do is stay out of the way!

My first thought when I saw where he qualified was “Uh oh!!!” He got further than I expected before spinning trying to go faster than his car could. And the 55 did what he was supposed to do too. They must have told the 23 not to spin out because of the rain delay.