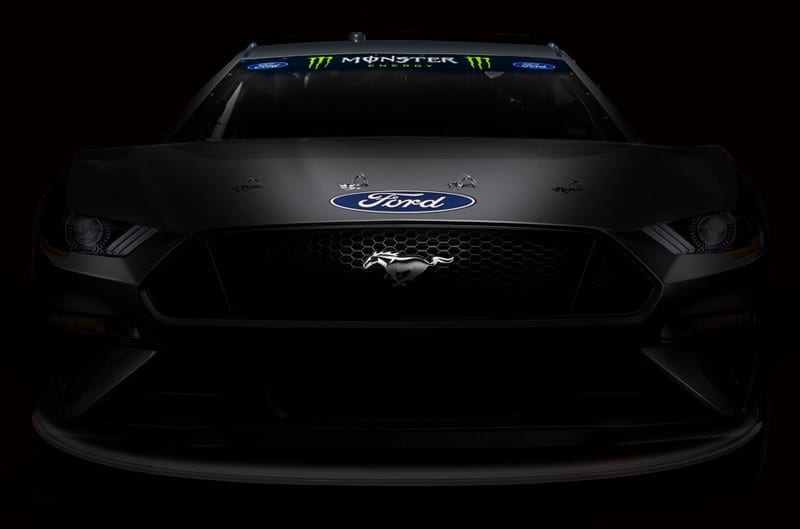 Ford announced Tuesday morning (April 17) that they will switch to the Ford Mustang in the Monster Energy NASCAR Cup Series starting in 2019.  The Mustang bodystyle will replace the Fusion, which has been used in multiple generations since 2006.

“We’re combining America’s favorite sports car with America’s top stock car racing series,” said Mark Rushbrook, global director of Ford Performance Motorsports.  “[The] Mustang always has been about affordable performance, which can be traced to innovations we’ve made competing in racing, like NASCAR.  [The] Mustang is a perfect fit for our racing heritage today and tomorrow.”

In addition to announcing the move, Ford Performance also released this tease video:

As per NASCAR rules, Ford would have had to have submitted initial plans to run the Mustang in 2019 in the middle of last season.  Ford Performance’s press release indicates that the company is still testing various aspects of the new car (as seen in the video).  It will then be submitted to NASCAR for final approval.  Once that is completed, the car will be publicly unveiled.  The new Mustang will make it’s Monster Energy NASCAR Cup Series race debut in the Advance Auto Parts Clash at Daytona on Feb. 10, 2019.

Despite a very successful history in motorsports, the Mustang has next to no history in the Monster Energy NASCAR Cup Series.  The only Cup win for a Mustang came under unusual circumstances at Bowman-Gray Stadium in 1971.  Back then, NASCAR allowed Grand American cars to compete in Grand National events with short fields.  Bobby Allison won in his Grand American Mustang.  NASCAR officially does not count this victory in their record books.

Outside of Cup, the Mustang has competed in the XFINITY Series since the then-Nationwide COT debuted at Daytona in 2010.  Since then, the car has won three driver championships (two for Ricky Stenhouse Jr. and one for Chris Buescher) and 70 races.

The Mustang is not just making news in NASCAR today.  A near-parallel announcement was made this morning in Australia about the Mustang entering the Virgin Australia Supercars Championship in 2019, replacing the outgoing Ford Falcon FG X.

In other words the nose and taillight decals will look like a Mustang, everything else? same old, same old. But I wish them well.

It WILL fit the Car Of Tomorrow templates. God help them.

Headline should say “moves to Mustang end caps, sort of.”

It makes sense for Ford to bring the Mustang to the Cup level for 2019. They, Ford, are moving away from car production, at least in North America, and pushing their S.U.V.’s and pick-ups. The Taurus and Fiesta are rumoured to be finished by the end of June, this year, and the Fusion is rumoured to be gone after 2019. The only car will be the Focus, which will not have a 2019 model for North America, returning with the Chinese built (God help us!) 2020 model. That stinks! Europe just got the new 2019 German-built Focus, and we get stuck with a piece of Chinese crap! Oh well, I guess there will finally be a Ford Escape in my future to replace my 2016 Focus when the time comes in another eight years.

Who didn’t see this coming after the Camaro debuted this year. Please Dodge (Fiat), bring the Dodge Demon to the NASCAR CUP Series. NASCAR could use another manufacturer in the Series.

LOL. Didn’t see the comments Sergio made about nascar recently did you?