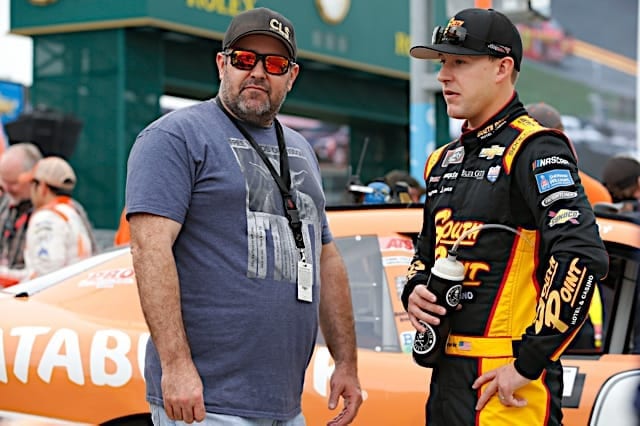 Daniel Hemric made his NASCAR debut in the Camping World Truck Series at Martinsville Speedway in 2013. After starting 16th, he suffered a transmission leak that derailed his chance to show his abilities. He ultimately finished 32nd, 60 laps off the pace. A second start a couple races later yielded a better result of 13th at ISM Raceway.

The following year, he made a single start in the season-finale at Homestead-Miami Speedway (he finished 12th) with NTS Motorsports ahead of his full-time rookie season with the organization. During that first full year, he scored 13 top 10s and four top-five finishes in 23 starts. Any average finish of 12.2 helped him make it to seventh in the championship standings. The following season, he made the leap to Brad Keselowski Racing where he posted 11 top fives and 17 top 10s, along with an average finish of 8.6. And while many pegged him as a driver who would win a race that year, he managed to finish runner-up twice.

Fast forward to 2018 and Hemric is well into his second season piloting the No. 21 Chevrolet for Richard Childress Racing. In just seven events so far this year, Hemric has one pole, three top fives and five straight top 10s, including a pair of back-to-back third-place finishes at Texas and Bristol.

During practice at Texas, second-year NXS driver Hemric took some time out to talk about his Monster Energy NASCAR Cup Series debut this weekend at Richmond, along with his road to NASCAR and his goals for the 2018 season after heartbreak derailed his championship run at Homestead-Miami Speedway last year.

Beth Lunkenheimer, Frontstretch: You’ve got your Cup debut coming up at Richmond. What can you pull from your time last year when you were subbing for Paul Menard that can help you?

Daniel Hemric: I had the opportunity to do that for four or five races. I think it’s the little things that are different, the stuff I will personally see and feel. Being in the racecar, having the digital dash, having the track bar adjuster. It is a different feel when you get to that side. Everyone is way more serious and more intense. Hopefully, I can bring a little lightheartedness to that.

I look forward to having the opportunity to even do it. That’s something every kid dreams about; having an opportunity to run at the top level of whatever sport, whether it’s kids playing t-ball to playing in the major leagues. It’s no different than starting in go-karts and getting a shot to run a Cup car. I’m extremely thankful knowing the stuff I did last year definitely will help me make that transition.

Lunkenheimer: What does it mean to you to run the No. 8?

Hemric: To run the No. 8 is big for me. It’s really even bigger for the NASCAR community. Growing up in the Kannapolis area, knowing what that number meant to the Earnhardt family, knowing what it meant to Richard Childress and the entire community.

It’s very special. It can be pressure, but it’s not. I think I got Dale Jr’s blessing, so I’m going to continue to do my deal and know that I’m proud to run that number and excited to have it back on the race track.

Lunkenheimer: You took a pretty traditional route to NASCAR. What’s the biggest challenge you faced on your way up?

I did the go-karts, bandoleros, legend cars, stuff that most kids do from the time they’re five to 10-12 years old, and got in a legend car when I was 15 years old. But from that, I went into a super late model. Nowadays that’s kind of normal, but at the time it was a big step. I felt like that went somewhat seamlessly and it made me have to adapt and go really quick.

From that, I bounced back and forth between the super late model and had a couple shots to run a tour type modified. That’s a big undertaking to go from those two different series to two totally different race cars. It made me as a driver have to develop and figure stuff out really quick. My opportunities were really sparse, so to say, so I was having to make the most of every one that I had.

Then I went straight from that to a truck; no ARCA, no K&N, none of that stuff. That part of it was tough because you’re going from a bias ply tire to a radial tire, you’re running on mile-and-a-half race tracks. The biggest one I had ever run on was a five-eighths-mile at Nashville Fairgrounds. All of that stuff made that transition tough, but I feel like everything I did short track racing and doing it in the manner I did in such varying series of cars prepared me for whatever was thrown at me.

Lunkenheimer: This year is the first time you’ve been back with the same team since you joined NASCAR. How does that change how your team is able to gel this early in the year?

Hemric: You get with a team and you finally get to know everybody. That takes a couple months and races together to learn your crew chief, all of your guys and all the people back at the shop that don’t go on the road. That keeps everybody pulling the rope in the same direction. Every time I got that going for me, circumstances happened to where I was having to do it all over again the following year.

It’s been really refreshing to be back with Richard Childress Racing, with a sponsor in South Point Hotel & Casino, knowing the Gaughan family and Brendan Gaughan personally. And oh, by the way, same crew chief, same guys going on the road. It’s just made it really comforting to know that we’re maybe two or three practices ahead everywhere we go based off of last year because Danny Stockman, my crew chief, isn’t having to learn what I want or what I need. We’re able to prepare better back at the shop.

Lunkenheimer: Last season, a lot of people didn’t think you’d make the Championship 4 in your first year in XFINITY. What was it like to silence those critics, even if it didn’t work out the way you wanted it to?

Hemric: For a lot of my career, I’ve figured out a way to put myself in the middle of those big moments and take advantage of them for the most part, and last year was no different. We maximized our days and when guys got themselves in trouble, we kept ourselves clean, especially the last half of the year, and that’s what got us to Homestead.

Before it went south with a parts failure, everyone saw that we were one of the fastest cars there and had a legitimate shot to take home the championship. It wasn’t for a lack of effort.

I don’t care how we get there, even if it’s the same way this year, and you have an equal shot as everyone else, that’s all you can ask for, especially as a racer trying to make a name for yourself in any series. We proved that we can go there and rise to the occasion by putting ourselves in that position last year.

Lunkenheimer: How hard is to have a parts failure derail your championship?

Hemric: It’s definitely one of the hardest disappointments I’ve ever had to deal with. Growing up short track racing or doing any kind of racing where you’re hands on yourself preparing the cars when stuff like that happens, there’s nobody to look toward or blame but yourself. And that guy a lot of times was me. It made me feel like I always had a lot in my control.

When you go through anything like last year where everyone knew the circumstances, everyone knew what we were racing for. I feel like even our boss Richard Childress would say we were a victim of our own demise because we were so concerned about every little thing that we took the part that failed off the race car to make sure we had a brand new one. That’s the first that failed us in the company in 15 plus years.

There’s always a backstory to everything, but it was because we were trying to make sure we were prepared and it’s something no one could control.

Lunkenheimer: What are your expectations this year?

Hemric: Where we ended last year, running inside the top five, top eight on a consistent basis. That’s what you have to do first off. There are a lot of changes inside the XFINITY Series with the bodies and the rules package. Everybody has to figure that out, but you gotta do it quick. Now we’re to the part of the season where the race tracks we’re going to are the tracks we’ll see in the Fall that will determine how your championship run continues.

Our goal without a doubt is to not only get to Homestead but be able to get there and finish what we left there last year. That’s our ultimate goal, but on a consistent basis, we have to make sure we’re trying to lead more laps, get more stage points and put ourselves in better positions for shots to win races.

Lunkenheimer: If you weren’t racing what would you be doing?

Hemric: If I wasn’t driving a race car, I would still be racing. I’ve always enjoyed the numbers and what makes racecars work as far as chassis, geometry and all the stuff that makes a racecar go round. That stuff has always made me tick, to a point where it’s maybe a little bit of a downfall once you get to this level as a driver because your mind is always torn between what the racecar is doing, what you feel and what you know in the past on other forms of racecars that’s fixed it. I would definitely still be involved in racing, building or working on racecars of some sort.

Lunkenheimer: If we were to dig into your playlist, what would we find?

Lunkenheimer: Do you have any special pre-race rituals?