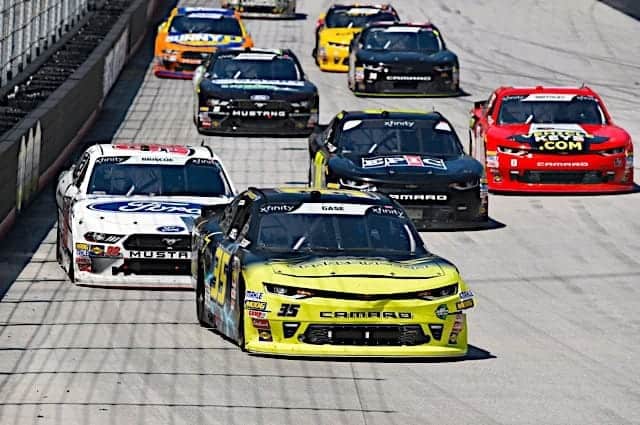 Expectations were limited for Joey Gase heading into the 2018 season as Go Green Racing was returning to the XFINITY Series for the first time since 2013. This season also marked the first time in team history that it was going to run just one driver for the entire season.

Gase, 25, departed from Jimmy Means Racing following the 2017 season. He had run four full seasons in the No. 52 car before taking on the new challenge at Go Green Racing.

Through the opening seven races of the season, however, Gase has four top-20 finishes, and was running inside the top 10 at the season-opening event at Daytona International Speedway before getting caught up in the first of five overtime finishes. The No. 35 team finished a season-low 33rd. Since then, it’s been a steady move forward for the newly formed team.

“It gives me a lot of confidence,” Gase told Frontstretch regarding his four top-20 runs. “Our goal every week is to finish in the top 20 and make the second round of qualifying. We’re beating with the guys we know we should be racing, hopefully beating some of the guys that have a lot better equipment than us or have a lot bigger budget than us. We’ve been able to do that a few times and we’re outrunning some of the big boys.”

Though Gase is currently 21st in the championship standings, he’s not far behind the likes of Austin Cindric, Kaz Grala and Michael Annett – all of whom are on larger teams than Go Green Racing. The 59-point gap may be a tad far out of the playoffs, but the No. 35 team only wants to improve every week.

“We’re a low budget team. We’re not on as low of a budget as I’ve been on in years past, but we’re definitely still considered a low budget team compared to the Gibbs, RCR and Roush and all of those guys,” Gase said. “We’re able to compete with those guys and able to beat them sometimes. It feels awesome to know that we’re outdoing them with everything they have going into it.”

Through seven races, Gase has an average finish of 22.1, more than four positions better than last season. His average qualifying position is 24.1, bettering his previous career-best by eight positions.

“I think we’re right around where we are hoping to be,” Gase said. “We had our goals going into the season and hopefully can continue that. Looking at the points, we should actually be quite a bit better than where we are right now.

“With the new rule changes and crashing out of the first green-white-checkered [at Daytona], I think there were four more attempts. It really killed us. We’ve been able to bury ourselves out of that hole and hopefully can continue to do that.”

Before this season, Gase’s previous high in points after the opening seven events was in 2014, his first full-time season in the XFINITY Series, sitting 20th. At that point, he had a best finish of 24th, and quite simply, there weren’t as many competitive XFINITY regulars in the series.

Because of the speed he’s seen out of the racecars to kick-off 2018, Gase is excited going forward. He knows he needs to continue capitalizing on his competitors mistakes.

“I think it’s a little bit of both,” Gase said. “Some weekends, like Texas [Motor Speedway], we didn’t have a top 20 car, but we were able to stay out of trouble and capitalize on other guys’ miscues. On other weekends, we did have a top 20 car in the race. At Fontana, we were really good on the long run. At the end of the race in Bristol, we were good on the long run, and I think Las Vegas was our other top 20, and we had a good car there as well.”

Going into the season, Gase admitted that it would take some time to get familiar with his team, along with SS-Green Light Racing, owned by Bobby Dotter. The two organizations are working out of Dotter’s shop, forming an alliance as both team members work on each of the cars.

Working with rookie driver Spencer Boyd, he hopes the team can build off the momentum it has, posting top-20 finishes in three consecutive races for the first time in Gase’s career.

“One of our goals is to get into the playoffs, and we know that’s a really lofty goal for a small team,” he said. “It’s still possible, and if we keep running like we are, we can run some of those guys down if they have issues. I think our main goal is to get as close as we can to get to the top 15 in driver points and top 20 in owner’s, and we’re knocking on the door of all of that right now.”

On Tuesday, it was announced Gase would be competing in second Monster Energy NASCAR Cup Series race of the season at Talladega Superspeedway on April 29. He confirmed to Frontstretch he will likely be in a “handful of races” throughout the season.