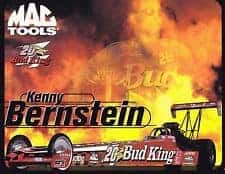 It’s back to the history books today for a look at the career of another legend, Kenny Bernstein.  Bernstein was the first driver to break the 300 mph barrier, the first to win championships in both Nitro classes, the first team owner to win in the top three American racing series – those being NHRA, NASCAR and CART – and enjoyed one of the lengthiest sponsor relationships in racing when he partnered with Budweiser for 30 years.

Bernstein dabbled part-time in racing for a number of years, but he became a full-time professional drag racer in the Funny Car category in 1979. One year later, he began his relationship with Budweiser, one that would continue for the next 30 years. It was this association and Budweiser’s crown logo that sponsored Bernstein’s NHRA entries, the King Funny Car and the King Top Fuel dragster, as well as his other racing endeavors, NASCAR’s King Racing and CART’s King Motorsports.

In 1985, Bernstein won his first Funny Car championship, the first of four consecutive titles he would run in the class. Along the way he regularly set new time and speed records for the class, becoming the first driver to make a run at first under 5.5 seconds then under 5.4 seconds while also being the first to break the 260 mph and 270 mph barriers.

In 1990, after changes in the Funny Car class, Bernstein made the switch to Top Fuel dragsters. It was in this class in 1992 that Bernstein achieved the feat for which he is probably best known: being the first driver to break the 300 mph barrier, with a 301.70 mph run in Gainesville.

2002 marked what would be his final full season behind the wheel as he embarked upon what was dubbed the Forever Red … A Run to Remember retirement tour. His son, Brandon, was tabbed as his replacement in the Budweiser King Top Fuel dragster, but Brandon’s 2003 season would be cut short by a season-ending back injury. Kenny Bernstein finished out the year in the car, winning four events along the way. In 2004, he turned the car back over to Brandon.

Bernstein would decide to return to driving one more time, this time in Funny Car, for the 2007 season but after less than stellar results from the effort, he retired for good from driving. He would continue on as a team owner before shuttering his team following the 2011 season retiring from NHRA drag racing altogether.

Bernstein also found great success as a team owner, of course with his multi-championship winning NHRA efforts, but also with his NASCAR and CART teams. Scoring wins in NASCAR with both Ricky Rudd and Brett Bodine and in CART with Scott Goodyear, Bernstein is the only car owner to win in all three of the top American motorsports series.