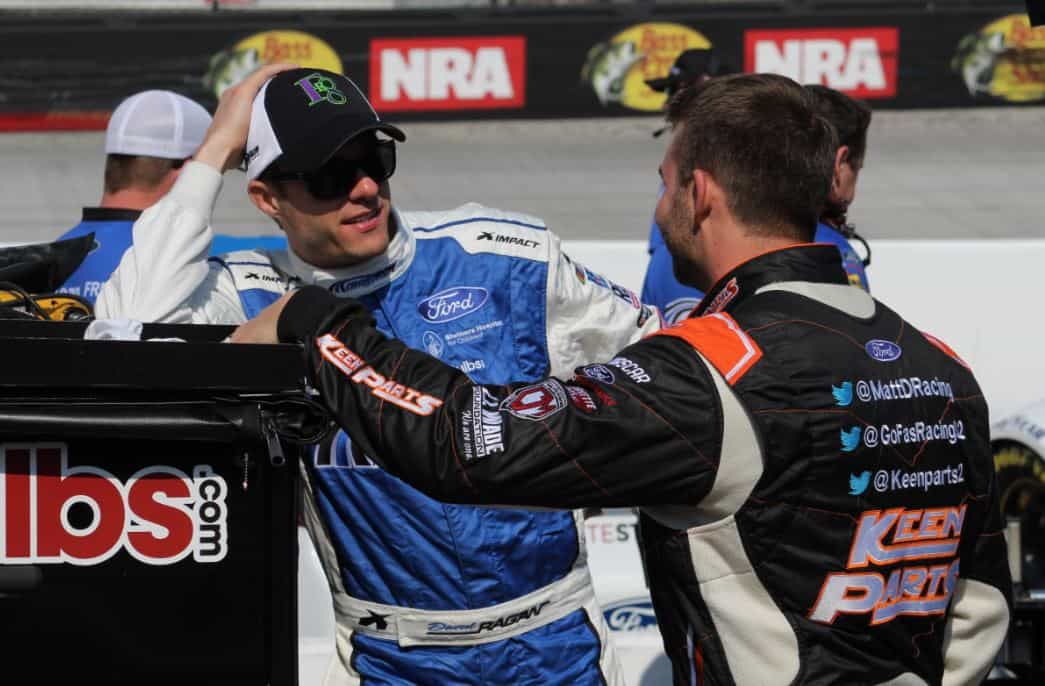 The middle leg of the unofficial short track swing wrapped up a day late at Bristol Motor Speedway this week. And with another curveball of weather hitting the NASCAR garage, the underdogs had a lot to overcome, above and beyond what we’d generally expect on a short track.

Starting Sunday afternoon, the Food City 500 was an opportunity race for Michael McDowell, who grabbed his best non-plate qualifying effort in the ninth spot. Front Row Motorsports had a step up from the green while top guns like Martin Truex Jr. and Kevin Harvick were behind the pack.

But it quickly flip-flopped after an early wreck on lap 5 ended McDowell’s day a few circuits later, also crushing Truex’s chances of staying competitive. Incidents like this one repeated throughout the two-day special, as Ryan Blaney, Denny Hamlin and Kyle Larson either crashed, spun or made an emergency pit stop out of the race lead.

There were essentially no places to hide on a track that evolved from one-lane bottom-feeding to a multi-groove track in the best of ways.

The unpredictability didn’t seem to frighten the underdogs, though. We saw some have their best runs of the year and others who made something out of nothing. Though Bristol is a track of its own color in a schedule smothered with mile-and-a-halves, it has a reputation of being one of the toughest. As a result, more weight is placed on a solid run in Tennessee.

Darrell Wallace Jr. took the spotlight on Monday in the most natural way possible… by taking the lead. The No. 43 Chevrolet was an avid top-10 runner most of the day and caused everyone to stop and wonder if it was time to see a new name in Victory Lane. Wallace, however, ended the day 16th.

After spending more than half the day in the top 15, on the lead lap, then jumping to the top 10 and eventually in the race lead for the first time, he finishing one lap down in 16th? Even Wallace himself was perplexed.

??‍♂️ onto the next. pic.twitter.com/2KKwdH3pl9

So, yeah, this column took a little hit when he fell through in the closing stages Monday. But it showed the team has some potential for the next short track this weekend at Richmond Raceway.

It also gave another spot to one David Ragan. As mentioned earlier, the race kicked off great for Front Row, which started ninth with McDowell. But the weekend started well even before the green as Ragan won final practice on Saturday afternoon in his No. 38 Ford.

When teammate McDowell crashed out, Ragan stayed in it throughout the day to finish on the lead lap in 12th. The result was his best of 2018 and bests a consistent run of finishing six races between 22nd and 25th place.

Additionally, Ragan earns the Frontstretch “Underdog of the Race” for the first time of 2018, the first non-Chevy to win all year.

Behind Wallace’s 16th was AJ Allmendinger in 17th. The JTG Daugherty racer overcame an early spin in Turn 2 to grab a decent finish for the second-best underdog team so far this year.

Wrapping up the top 20 was Landon Cassill, ending his third race for StarCom Racing in the 20th spot. The run was particularly surprising from the new team, as attrition wasn’t out of control like Texas last week where the No. 00 team finished 21st, and the track conditions would have surely crushed a small team like StarCom.

Not quite. The experienced Cassill instead finished only two laps down and earned the team its best-ever result. They will be back together this weekend at Richmond.

Wrapping up the honorable mentions are Matt DiBenedetto and Corey Lajoie. For DiBenedetto, 21st is a good day. The Go Fas Racing team has only one top 20 (16th at Texas), making Monday its second-best finish all year.

For Lajoie, 25th isn’t much to take home, but it’s a spot higher than Cole Whitt‘s average this year and ended a run of back-to-back engine DNFs for the 26-year-old.

Like most weeks, there are the few good stories to boost after each race, with most of the underdogs hitting this unfortunate section of the column. For many, the Texas happiness fell off in a big hurry.

It started with Ty Dillon, who earned his best finish of the year in Texas in 13th. That level wasn’t touched on Monday, as Germain Racing drove quietly to 28th spot. DJ Kennington made his first Bristol start for Gaunt Brothers Racing, finishing a spot ahead of Dillon in 27th.

Gray Gaulding didn’t see a third top-20 result of 2018 on Monday, finishing 31st, followed by Reed Sorenson. Chad Finchum spun during Sunday’s action, but stayed on track until he retired at after running 335 laps due to crash damage. He finished his Cup debut in 33rd.

Kahne struggled at a place he won in 2013 with Hendrick Motorsports, finishing way back in 34th for Leavine Family Racing. He suffered mechanical issues that, despite the team’s best efforts to correct, sidelined his run early. It tied his worst finish of the year through eight races.

Buescher was involved in mutliple wrecks and couldn’t seem to keep himself out of trouble. He finished 36th while Harrison Rhodes crashed out with then-leader Ryan Blaney on lap 119.

McDowell’s potential ended in 38th with Ross Chastain suffering the first DNF of his Cup career after just three laps for Premium Motorsports.

The XFINITY Series got lucky with a beautiful day of sun and heat for Saturday’s Fitzgerald Glider Kits 300 at Bristol. And a few underdog teams showed their appreciation by finishing up front.

Spencer Gallagher has been in the section nearly every week, finishing no worse than 14th all year for GMS Racing. That consistency hit a high Saturday when he drove to fifth place, his and the team’s first top-five finish in the series.

Chastain’s Cup start didn’t last long, but he made the most of the XFINITY event, grabbing ninth for JD Motorsports. He already has three top 10s this year.

The top 10 was capped off with Ryan Truex capturing his third top 10 of the year in 10th for Kaulig Racing. Truex and team are still eyeing their first career win together in 2018.

This is incredible!?? Now this is a fake account that I can get behind! YRB is that you??? @Blaney pic.twitter.com/YgHag7TiEw

Being a race fan for the @NASCAR_Xfinity race here at @BMSupdates. This is the way to do it! Not a bad seat in the house here ? pic.twitter.com/v4yshxjPs1

Proud of the effort @Team_FRM gave me this weekend. Lots of adversity to overcome in 2 days of racing and came home P12.

Thanks to all the fans who stuck it out with us! See ya in a few days in Richmond. @ThePeteStore

Top 20 at Bristol for @StarcomRacing is exciting and all, but the real story is that we did it on the same right side tires for the last 125 laps of the race because we ran out of tires in the pits. What a car!

.@RyanPreece_ is such a good example of what happens when you give a hardworking person with talent who is in “underdog” equipment a chance in top-notch equipment.

The underdogs don’t belong in Cup races, period. Eventually, NASCAR will be down to 20-25 starters per race and we can dispense with this foolishness of cheering for drivers who are only there to wreck the contenders and feed their egos.