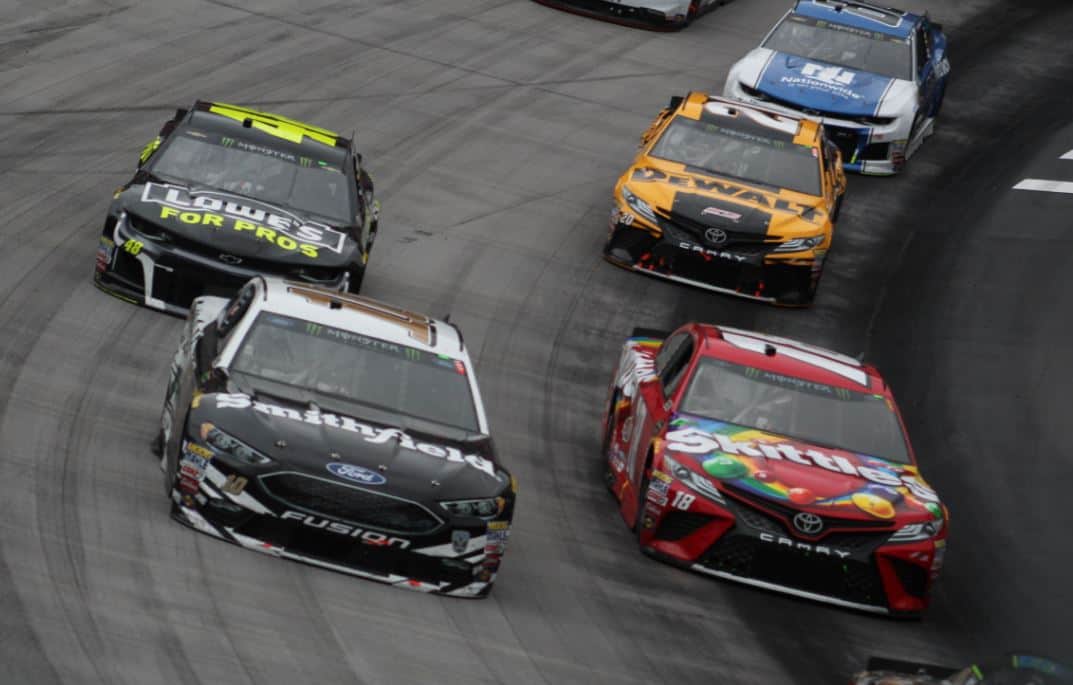 After early dominant driver Ryan Blaney was knocked out in a crash Sunday at Bristol Motor Speedway, Kyle Larson led a race-high 200 laps only to be disappointed by a late-race pass for the win by Kyle Busch. What effect will the defeat have on Larson and whether he can win a different race later this season?

John Haverlin: Kyle Larson won’t be affected at all. He’s been in the Monster Energy NASCAR Cup Series for more than four years now, and he’s capable of winning and losing without letting his confidence get to him. He’ll win this season; it’s just a matter of when. After all, he is the defending Richmond Raceway winner.

Christian Koelle: Larson can always bounce back, and back-to-back-to-back however many engine failures he had at the end of last season really matured him. Larson won at Richmond last September, and he will definitely be a threat on Saturday night.

Matt McLaughlin: To get that close to winning and have it taken from a driver’s grasp is only going to make them more determined to win the next time they are in the same position.

Vito Pugliese: Net effect on Larson will be zero. He got beat by Kyle Busch at Bristol — it’s not the first time it’s happened to someone and certainly won’t be the last. Bristol is the trademark track of domination only to get passed in the closing laps; just ask Rusty Wallace. Keep in mind Larson is also the guy who for his first win could have easily put the wheel on Matt Kenseth to move him over at Dover International Speedway, and he didn’t. He’ll be good to go the rest of the season.

Wesley Coburn: This will probably sting for a couple weeks, particularly if something goes wrong in the next few races, but Larson will get over it and win a race or two this season.

Mark Howell: Larson’s troubles at Bristol will only motivate the talented driver to run harder. He will see better weeks, if he has anything to say about it. Of greater concern might be the overall resilience of his team. Getting kicked in the teeth more often than not can wear hardworking personnel out. This car on the Chip Ganassi Racing express can’t keep making stops at Frustration Station.

Ryan Preece scored his second win in seven starts with Joe Gibbs Racing at Bristol, and he has yet to finish outside the top 10 during that timeframe. Does this performance signal he deserves a full-time ride, or is he doing what any other talented driver would in the organization’s equipment?

Haverlin: Ryan Preece deserves a full-time ride. His car control is second to none, and he’s a hands-on, blue-collar modified racer that has made it to the national scene without the biggest bank account in the garage. At age 27, time isn’t on his side, so it’s time for JGR to invest in this Connecticut driver and see if he can compete for a championship.

Koelle: Preece was even pretty good at JD Motorsports. Everyone in this sport has the talent to get where they are today, so without a doubt, Preece has the ability to do big things. The only problem is that funding isn’t there, which is exactly why he isn’t running a full-time schedule. It absolutely stumps me as to why drivers like Preece and Kyle Benjamin are left racing in the races that the Cup guys can’t do. Pull those guys out and put these guys in full-time. After all, they’re the future of the sport.

Neff: We have seen a lot of different drivers jump in JGR equipment over the years, but no one has run like Preece has on a short schedule. He’s certainly proven he deserves a full-time ride somewhere. It would be nice to see Dale Earnhardt Jr. put him in a ride since he suggested to Preece that he should run a handful of races in quality equipment. Perhaps when Elliott Sadler wraps up his career.

Amy Henderson: While there are a half dozen drivers I’d like to see have a shot in that equipment, Preece has had the shot, and he’s done everything right, so he’s absolutely earned the ride full-time.  Whether he gets it is another story because JGR will indulge its Cup guys as long as they want to race the lower series, and that means without fielding another car, the team is going to give Preece the dregs. I’d have put Preece in a full-time ride over Brandon Jones without question, but I’m not paying the bills.

Coburn: It seems like almost any driver could run that well in JGR equipment, so I’m not sure. Preece is already too old for owners to consider him seriously in a full-season, well-funded ride, which is kind of a shame, considering that he can drive.

Clayton Caldwell: It pains me to have this conversation. Everything that Preece has been in, he’s won. He’s proven himself time and time again and still can’t find a full-time opportunity. I know it’s a different era, but the sport will be better off with talents like Preece running full time. That being said, I just don’t know what his future holds. Money is tight for every team, and he doesn’t bring a lot to the table.

Much of the talk on social media has been regarding the so-called “old Bristol” being back and the bottom lane being dominant once again. Do you think the old Bristol can be sustained with the traction compound in years and races to come?

Howell: I’m not a big fan of tracks using compound to improve the groove. I’d like to see tracks like Bristol manage conditions more organically, but I understand that such fixes are neither automatic nor timely. I don’t care what the topic; aging is not a ton of fun! Unfortunately, Bristol’s surface will keep changing, regardless of how much compound, or how many tweets, we see.

Koelle:  It was the old Bristol. No, not the Bristol from the early ’90s to the early 2000s, but the Bristol from the 2005-2009 era. The racing we saw on Sunday/Monday was exactly what I remember from that era of racing. Single-file, move-the-leader-to-win-type Bristol is back, and I hope it’s here to stay. Now just leave the darn thing alone.

Neff: It was a perfect storm this weekend — cold temperatures, fits and starts with the race allowing them to apply the compound mid race. It won’t stay the same until they have a freezing cold late winter again next season.

Pugliese: I think old Bristol had more to do with it being freezing and the result of cold weather and traction compound eating up tires on Monday. Bristol is a much faster track that Martinsville Speedway, and the quicker, preferred way will be around the bottom, particularly if there is sticky stuff or worn-out rubber.

Henderson: No.  Everyone got lucky with the delay in that they were able to add traction compound halfway through the race.  Normally, they wouldn’t be able to do that, and it would have worn off as it has in the last couple of years. Also, the cold temperatures provided more grip than you’ll see in August, even at night.  I don’t have an issue with the racing at Bristol personally; I know some do, particularly if they like multi-car wrecks.  The only way to get the old track back would be to reconfigure it next time it’s due a repave.

Coburn: The weather made good racing over the weekend. With the way the cars are designed and the different mindset and driving styles that this generation of racers has compared to bump-and-run Bristol, I would guess this would be an anomaly. It was a great race, when they were actually racing, but times have changed too much for that style of racing to be the norm.

Caldwell: The race was unique because they were able to reapply the traction compound back on the track after 200 laps due to the red flag and the rain. That contributed to the excellent racing we saw in the second half of the race on Monday. The compound helps, but it’s not the only solution, because you won’t have a chance to reapply in the middle of the race every race. Changes to the package would help Bristol even more.

Haverlin: Richmond produces better racing during the day when the track is hotter and slicker. But Saturday night racing at the bullring always looks aesthetically pleasing.

Neff: Night racing sucks. There should only be two night races — the All-Star Race and the Bristol night race. It is miserable in some places during the summer, but that is just the way it works. Your best chance for great racing is in the heat of the day in the summer. Hate we got rid of them for the most part, because that ship has arrived.

McLaughlin: Day is fine, but night is all right as well. Just so long as it ain’t raining.

Pugliese: Daytime for the spring race, night time for the summer event. One, it’s still cold out, and there’s snow blanketing within a few hours of Richmond as of Thursday, and the racing is usually better in the daytime, given the tire wear and slicker surface with reduced grip.

Henderson: Night races are the worst thing that’s happened to NASCAR.  The cars look pretty under the lights, and maybe that gives an illusion of excitement, but I prefer the racing we see on a hot, slick track.  Last fall, Charlotte Motor Speedway accidentally had its first day Cup race in years, due to weather, and it was one of the better Cup races we’ve seen there in the same number of years. Bristol isn’t so bad because it’s not an aero track, and if it had a better date, Martinsville probably wouldn’t suffer too badly.  The rest, even Richmond, race better in the day.  NASCAR should limit the number of night races tracks can host to one, and even then, most of them would do better to race in daylight.

Howell:  I’m a big fan of night races at Richmond. It’s a track that seems to handle the changing conditions of darkness and cooler temperatures very well. While I still miss the old fairground days, I’m totally fine with Saturday night shows at Richmond.

I will never understand the appeal of single file ‘racing’ that engenders so much praise when it happens at Bristol. I would rather see cars race each other side by side than see cars bump into each other. If bump-and-run is more exciting than catch-and-pass, then maybe we should just throw out the pretenses, change the series name to Monster Jam NASCAR Cup Series and change the rules to mandate contact prior to passing, like a paint-to-pass race at the local fairgrounds dirt track.

Bill B
Reply to  Moparjeff

75% of the tracks these days offer side by side…really, more often nose to tail aero, racing. Nothing wrong with the occasional throwback to the good old days when rubbin WAS racing.