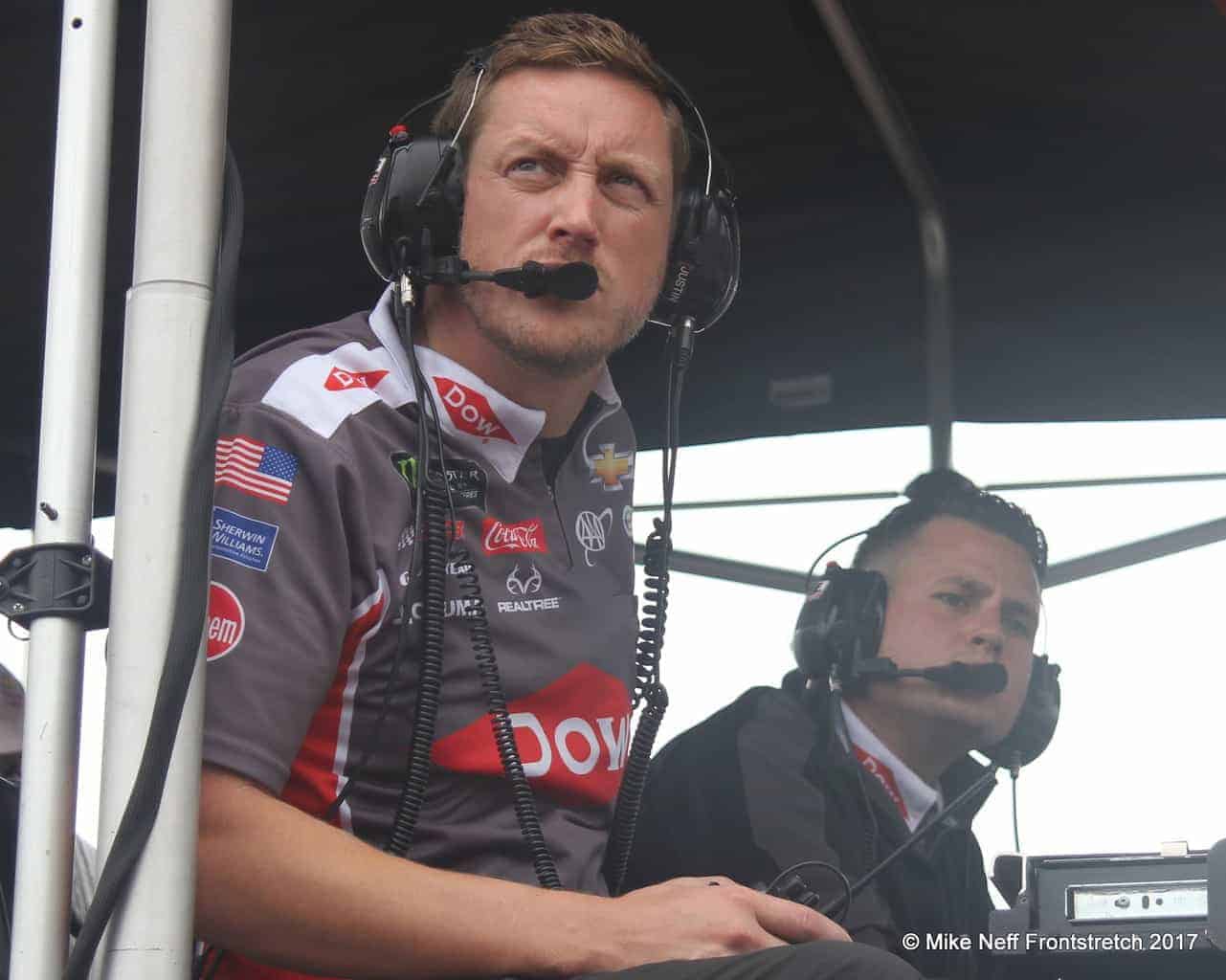 The third short track in four races in the Monster Energy NASCAR Cup Series is a completely different challenge from the previous two. Martinsville Speedway is a flat, high-braking, rubbin’-is-racin’ kind of track. Bristol Motor Speedway is high banks with minimal braking, but the cars still trade paint.

Richmond Raceway, meanwhile, is the short track that thinks it is a speedway, with its D-shape and high-corner speeds. Getting through the center of the corner as quickly as possible will afford teams the chance to get onto the straights at high speed and complete passes.

Justin Alexander, crew chief for Austin Dillon, is preparing the No. 3 for this weekend’s race at the ¾-mile track in Richmond, Va. For the latest Tech Talk, he touches base on springs, shocks, truck arms, camber and multi-zone tires and how they can impact the center of the corners and the drive off the corner. He also notes that making a great center of the corner can kill the entry, which ultimately destroys the whole corner, among other points.

Justin Alexander – Well, it was good on one hand and not so good on the other hand. We had a decent car up there for the better part of the weekend. We didn’t qualify exactly where we wanted to. We worked on the car and got it better in race trim. We made some changes and went into the race trying to adjust for the track knowing it was going to be green, trying to adjust the balance. We took off and the car was really good, and he was really happy with it. We had pretty good speed, and the balance was about perfect. He didn’t have any issues with it. For the first 200 laps or so on Sunday, we really didn’t change much, balance-wise, on the car. We just put four tires on it and let him go. We’d lose some on some restarts and gain on others depending on what lane we were in.

So Sunday went pretty well and then Monday came. The car was still pretty good, and we were pretty happy with it. We adjusted on it very little, the whole race. What really messed our day up [was] with about 100 to go, I believe a caution came out for snow, actually. We had burned through a lot of tires and at some point in the race it was a tire management game. We had not stayed out on any of the previous cautions. We hadn’t really saved any sets of tires, so we were on par with most of the rest of the field. Some of the field had a set up from us. So we opted there to stay out, thinking we’d see another quick caution. That happened to be the longest run of the race after that.

So we rode around, and we were pretty good for about 2/3 of the run, and then we kind of burned up the left-front tire, kind of similar to what some of the other guys had been doing with the green track. Using up that left-front tire got us really tight, and we just couldn’t keep up anymore and slowly started fading back. We ended up getting lapped because of that, and that put us down and kind of ruined our day. By the time the caution came out, we were a lap down and had to put tires on it. So we raced for the Lucky Dog that last run and ended up 15th, I think.

I was happy with the car, the balance and the speed in it. We just kind of got in a bad situation on tires, as did some other guys, [and] it just didn’t work out in our favor. All in all it was a decent weekend but not the finish we were hoping for.

Neff – There were many teams reporting a lot of left-side tire wear on Sunday and Monday. Do you think it was because of the traction compound peeling the rubber off of the tires more than the green track surface wearing the tires?

Alexander – No. I think it is more the tire itself, a combination of the tire and the green racetrack. I think the compound has a little to do with it. You know, you sometimes end up wearing it more when you go to the top and out of the compound on a green racetrack. It is more of a scenario with that particular tire. There are some things that you can do to try and make the tire last a little bit longer. Obviously we didn’t know when we set the car up on Saturday that the race was going to be delayed 17 times and we’d end up racing on Monday. We had an idea that we’d race on Monday because the rain forecast for Sunday looked bad. You never know that the track isn’t going to rubber up and you’re going to have so many rain delays, and the track keep getting green. It was just one of those deals.

Neff – Richmond is the third short track in four races, but it is a different animal from Martinsville and certainly from Bristol. What is the No. 1 difference of what you looked for at Bristol vs. what you are looking for at Richmond?

Alexander – It is a much flatter track, much less banking. Richmond, you want to focus on making the car turn in the middle of the corner and keep the drive off of the corner in the car. That is the two places where you can beat people. Richmond is a place where we have run decent in the past but have also struggled in the past as the No. 3 team. It is something where we are going to go there and try some different things to see if we can learn some things for the playoffs, because this is a playoff race now. We’re going to go and try to learn a few things and try and get honed in onto where we need to be when the playoffs get here.

Neff – Since NASCAR has gone to the no ride-height rule, what are the things that you can change in the car that will have the biggest impact on maintaining or increasing your drive-off of the corner?

Neff – NASCAR is still utilizing the multi-zone tire at Richmond. Does that tire allow you to be more aggressive with the right-front camber to make the car dig in and turn a little better in the center of the corner?

Alexander – Yeah, we definitely work with the right-front camber and even the left-front camber some to help get us through the middle of the corner. The problem with putting too much camber in the front is it can make you too loose on entry. When you are too loose on entry, it messes up the rest of your corner. I talk about the middle and the exit a lot, but it all starts with the entry. We can run a little more camber in the right front at this place than a lot of others, but you do have to be careful not to do too much. You can wear the tire out too fast. You can put a lot of camber in it and be really fast for a short period of time. If you burn the tire up, you’ll be no good on the long run. There is a balance there that we have to look out for and kind of adjust for. It is a fine line, but we have a good idea of where we want to be there.

Neff – Shocks and springs come into play at these tracks for a couple of reasons. Do softer- or higher-rebound shocks and springs give you more drive-off, or do you need stiffer springs and shocks with less rebound?

Alexander – Typically softer springs and softer shocks and things of that nature are going to give you more grip and more drive-off of the corner as opposed to a stiff, hard shock. Once again, even though it is a short track, there is always an aero aspect that you have to keep in mind. You have to work to maintain the body attitude, as well. You can’t just let it go. It isn’t Martinsville where you can just do whatever you want to do. You really have to balance the aero, the attitude and the optimal settings there and then work in the best mechanical settings you can. We will tune the rear shocks and springs to maintain the best drive-off we can but also continue to maintain the best platform that we can.

Neff – The XFINITY race at Bristol saw brake issues take out Christopher Bell when his rear tires chattered under braking. It isn’t always a problem you worry about at short tracks, but it can be an issue on these tracks where you are traveling at a high rate of speed and have to get the car slowed up in a hurry. Is that something you worry about with brake bias and making concessions on rear springs and shocks trying to eliminate potential wheel hop at Richmond?

Alexander – Wheel hop can be an issue, but it isn’t something that we deal with, it usually isn’t a big deal at Richmond. We definitely adjust the brakes and the brake bias for the driver to help him get in the corner. We can put front bias in if he’s a little loose in or put some rear bias in it if he’s a little tight in. There are some things we do to help balance his entry with the brake bias, but wheel hop isn’t something we battle very much at Richmond.

Alexander – For us the No. 1 priority is aero, and then we worry about mechanical grip. They go hand-in-hand, so you have to take both of them into account, and they are both very important, which is why Richmond is such a tricky place. Outside of Martinsville, aero is really a big factor pretty much everywhere we go. We really focus on the aero side of things. We do everything that we can to the bodies to get the most out of that, and then we tune the mechanical setup around that to take advantage of the best aero platform that you can have while making the most mechanical grip you possibly can.