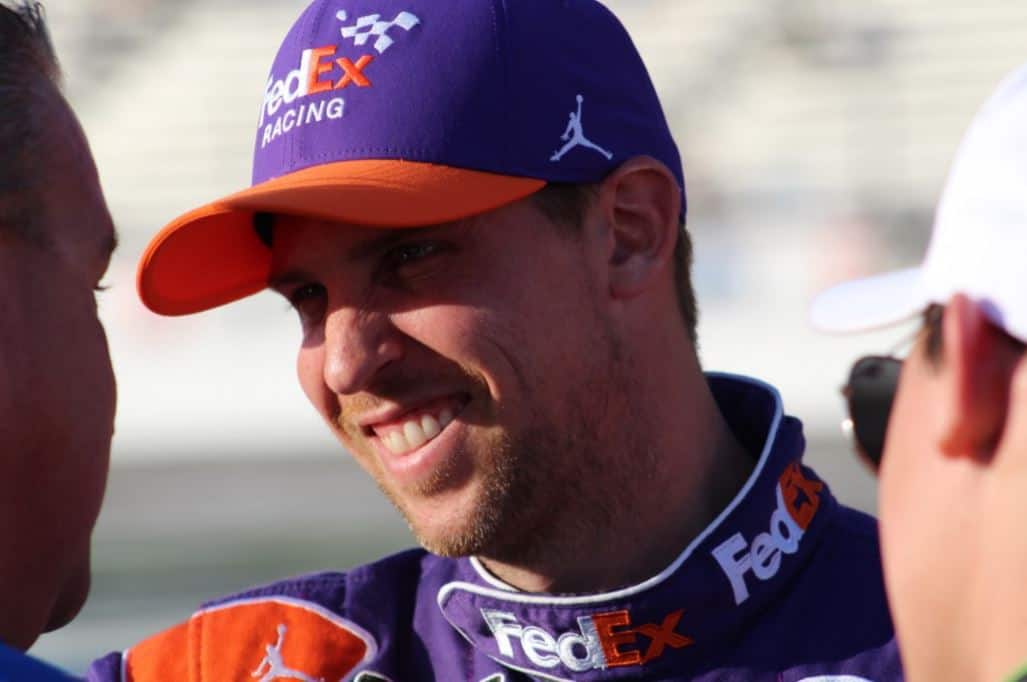 The night ended with Hamlin holding a trophy in the same Victory Lane where he celebrated in all those years ago.

“This is special,” Hamlin said. “There’s a little bit more fanfare now that a few more people know me, but these wins mean just as much to me as any [Monster Energy NASCAR] Cup win.”

Hamlin passed former DHSTS winner C.E. Falk III with 25 laps to go and held off a late charge from Kyle Busch to win for the second time in the race’s history. Busch finished second, while Timothy Peters, Falk and Peyton Sellers rounded out the top-five.

The Showdown has become one of the biggest late model races in the country due to the fact that it gives local racers a chance to compete against Monster Energy NASCAR Cup Series stars while benefitting the Denny Hamlin Foundation. Other NASCAR stars joining Hamlin and Busch in the event this year were Peters, Brett Moffitt and Myatt Snider.

“I come in the pit area and see hundreds of people that are still working on the same race cars they were working on before I even made it into racing,” Hamlin said. “It’s so cool to see.”

The race was held annually from 2008-15, rotating between Southside Speedway, Richmond Raceway and South Boston Speedway. The event did not happen the past two seasons because it was scheduled to be at Langley, but the track shut down for the 2016 season and reopened the following year.

This year’s race consisted of 200 laps, broken into two 75-lap stages and a 50-lap sprint at the end.

The night started with a beacon of hope for the locals, as five-time Langley late model champion Danny Edwards Jr. edged Hamlin and Busch to win the pole award. Edwards time at the front was short-lived; Hamlin took the lead from him on lap 4.

A major pileup happened on lap 5, with four-time NWAAS national champion Philip Morris and Langley winner Connor Hall getting caught up in it among others. Morris’ and Hall’s crew members got into a shoving match on pit road after the incident.

Caution laps did not count for the event, so the restart occurred on lap 5, with Hamlin and Busch battling side-by-side for the lead for a few laps. Busch took the lead on the outside, before Hamlin used the upper groove to take the lead back on lap 10.

Falk started to put pressure on Busch for third when a huge wreck occurred on lap 35 that included Moffitt and Joe Gibbs’ grandson Ty Gibbs.

Hamlin continued to lead Busch on the multiple restarts that followed, until Falk broke up the Cup party at the front by passing Busch on lap 49. Falk stalked Hamlin for several laps after, but Hamlin got through lapped traffic better and cruised to win the first stage.

Busch came back on Falk and got around him late in the stage to finish it in second. Falk, Sellers and Peters rounded out the top-five.

When the green flag flew for Stage 2, Busch slid up the track and Falk took second away, but the pass was nullified for the caution coming out simultaneously for Eddie Johnson spinning. A long green flag run followed the next restart, and Falk didn’t seem to have the speed he had before. He was gapped by Hamlin and Busch before losing third to Peters.

The race stayed green until the end of the stage, with Hamlin cruising to the easy victory over Busch, Peters, Falk and Sellers.

The final stage was a 50-lap sprint to the finish, and its start was the end for pole sitter Edwards, who was involved in a major wreck with Tyler Hughes and Nicholas Sanchez that brought out the red flag. The race continued to be a wreck-fest early in the final stage, but there was finally a long run to the end under green.

Busch’s last restart was a poor one, and he dropped to fifth while Falk moved into the runner up position. Falk chased down Hamlin and hit the race’s namesake with the bump-and-run to take the lead, just as he did in 2010 when he won the DHSTS. However, Falk didn’t run too far this time. Hamlin maneuvered his way through lapped traffic better and used the momentum to take back the top spot.

“I think my crew chief was worried quite a bit about me burning the tires up,” Hamlin said. “I was telling him, ‘That’s as easy as I can drive.'”

Hamlin pulled away from Falk, but the race was not over yet. While the battle for the lead was going on, Busch had worked his way back up to third. The 2015 MENCS champion caught and passed Falk and was left with 16 laps to try to catch Hamlin. Busch got there with seven to go and stayed right on his Joe Gibbs Racing teammate’s heels, but he didn’t apply the bumper. Instead, Busch raced Hamlin clean, and Hamlin fended off the charge from the three-time DHSTS winner.

“I think if this is the Kyle Busch Foundation race then it probably would have went a little different, for sure,” Hamlin said. “We knew that we were going to race each other clean, and he made a heck of a run to get to us there…I’m still one behind Kyle, and I’ll get that one soon.”

But it was the product of Langley who grabbed the checkered flag in his signature No. 11 FedEx car.

“It’s a great momentum builder,” Hamlin said. “People underestimate what a win like this can do for your Cup weekend. Trust me, it puts you in a bit of confidence and great mood to go to Richmond now and hopefully have a great weekend there.”

Hamlin said after the race that he hopes to have the race at Langley again next season.