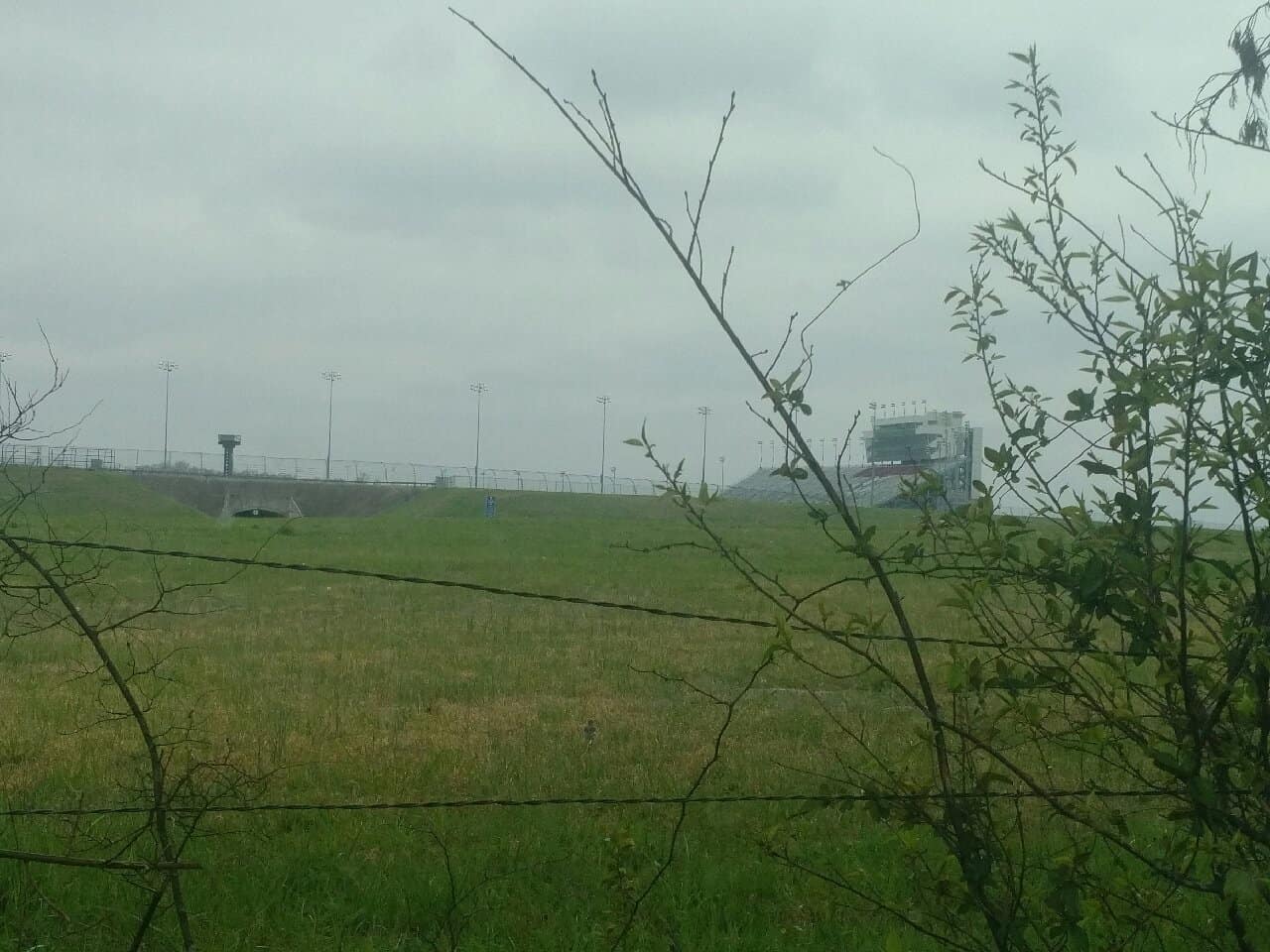 The brave, coverall-clad souls that weathered snow flurries and bitter cold temperatures to attend ARCA’s recent doubleheader at Nashville’s Fairgrounds Speedway were treated to the same tire-grating, close-quarters stock car racing that has made the bullring a destination track for over 100 years. Between Zane Smith powering to his first ARCA Racing Series win and Casey Roderick storming from the back of the field to top Camping World Truck Series regular Stewart Friesen in the late model appetizer, there were no complaints to be had about the product seen on the track.

Sadly, it’s what wasn’t seen on the track that will tell the tale of stock car racing’s future in the Music City. And no, that comment doesn’t refer to the track’s sunken layout that leaves much of the infield and hauler parking invisible to fans in the grandstand.

Given the topography of the facility, had my Frontstretch colleague Christian Koelle not texted me with Twitter updates throughout the evening, I’d have never known of the fight that broke out between Steve Wallace and Richie Wauters (among others), who watched the former NASCAR regular blatantly wreck his No. 5 late model (driven by Mason Mingus) only 11 laps into a 100-lap feature.

Huge fight in the garage at @FGSpeedway between steve Wallace and wauters. Here's the video!!! pic.twitter.com/HR6LjNTUYN

This year’s Music City 200 marked the fourth consecutive season the ARCA Racing Series contested the Fairgrounds. That’s an achievement when one considers just how hard a struggle it has been to establish events for the ARS in the Southeast. Since 2005, ventures to short tracks in Lanier, Ga., and Lakeland, Fla., lasted only one season. The series’ much-celebrated move to Rockingham Speedway, an effort spearheaded by former ARCA champion Andy Hillenburg, lasted only three years in North Carolina. And the series’ attempt to bring big-time stock car racing to the road course at Palm Beach lasted only one ill-fated weekend in February 2010, when torrential rains led cut the 150-miler short and led former ARCA driver Bryan Silas to describe his experience to me as racing in front of dozens of people.

There’s plenty to question about the stability of the ARCA Racing Series at the Fairgrounds. Just look at the recent example of Mobile International Speedway. Despite Mobile being a bullring built for stock cars, despite being similar in many ways to the Berlin Raceway oval that ARCA has called home for decades and despite a spate of local race winners (Cale Gale, Grant Enfinger) and a truly badass jukebox trophy, the Mobile 200 ended after four seasons.

Now consider the Fairgrounds Speedway, a historical oval similar to the Winchester Speedway that ARCA has called home for decades, with a badass guitar trophy. Despite putting on a great race, 2018’s race featured the lowest car count ARCA has seen since returning to the Fairgrounds in 2015, just as Mobile’s last 200-lapper saw the lowest car count that track had seen in its four years. And as miserable as the weather conditions were for race fans this April (the notes I took with frozen fingers during the race resembled hieroglyphics), it put a massive damper on the crowd. Just ask Palm Beach what a weekend of terrible weather can do to scheduling prospects.

Fortunately for racing history nuts, ARCA fans in the Southeast, etc., the Fairgrounds still has plenty going for it. The promotion company handling the Music City 200 is deeply invested in ARCA racing, as it also promotes the series’ crown jewel dirt track races in Springfield and DuQuoin. The location of the racetrack in Tennessee places it far closer to ARCA’s footprint than deep southern Alabama. And though the car count was the lowest seen in four years at Nashville, it still was a stronger field than Mobile’s last race in 2015. I’d wager that ARCA will be back at the Fairgrounds in 2019. For how long though, and for how long anyone will be racing at the Fairgrounds, or in the city of Nashville in general, is truly up in the air.

This fall, Nashville was selected by Major League Soccer for an expansion franchise. The centerpiece of the city’s proposal to receive a pro soccer team was a partially city-funded, 27,500-seat stadium… on the Fairgrounds property. Right next to the racetrack.

It is important to note that the city, prior to approving the stadium deal, granted a 10-year lease to current speedway promoter Tony Formosa to continue racing on the oval. And according to Formosa, in an interview published in Hot Rod in October, he had received assurances from Nashville’s mayor, Megan Barry, that the soccer stadium would not encroach on the racetrack’s footprint, stating, “the mayor has been very loyal to me, and she’s said publicly the speedway will remain here.”

The issue(s)? For one, Barry is no longer Nashville’s mayor, forced to resign from office six weeks ago for having an affair with her head of security, including while on official travel, and pleading guilty to a felony charge of stealing money from the city. The loyalty on which Formosa staked much of his case for stability of the Speedway in October is now worth less than the paper on which said interview was printed.

Speaking of paper and its value, if there’s one thing Nashville’s racing community should be familiar with, it’s how little deals on paper actually are worth. It doesn’t matter that a track with a loyal following and more than 100 years of history has a lease on paper, the same way it didn’t matter that Nashville native Sterling Marlin, a two-time Daytona 500 winner, had a deal on paper with Ginn Racing in 2007 that blew up one week after Firecracker weekend at Daytona  International Speedway (Marlin never raced full-time in Cup again after taking that deal). No, Bobby Ginn has not resurfaced and is not involved in the current tension between the city and the Fairgrounds, but the principle remains the same. Deals in motorsports don’t mean anything past the current race weekend.

Sticking with paper, one should also take a look at the case the city of Nashville made for giving Formosa the lease it did on the Speedway. On paper, it was a true case of David topping Goliath, the longtime racer and hardworking promoter defeating a bid by the mighty Bristol Motor Speedway. But an analysis of the city’s award justification document paints a less rosy picture of the deal Formosa received to keep the Fairgrounds operating.

1) In considering a competing proposal from Alexander Racing, a proposal to double the number of motorsports events at the facility was rated a weakness that “does not align with current desires/priorities of the Fair Board and has a direct noise impact on the surrounding neighborhoods that must be considered.”

2) In considering a competing proposal from Bristol Motor Speedway, LLC, the city looked unfavorably on the 30-year lease terms proposed and on the proposal relying on capital funding being provided by the metro Nashville government. Also, there’s no mention of the Bristol proposal’s NASCAR backing nor the potential such an affiliation had to bring big-time NASCAR back to Nashville (the city has not hosted a top-tier NASCAR race since 2011).

Read all that again. The city considers increasing the motorsports calendar out of step with the priorities of the Fairgrounds. Despite ties to major league NASCAR, the city wanted nothing to do with funding improvements to the racetrack, only to weeks later approve a soccer stadium package that includes “$200 million in revenue bonds, [and] $25 million in Metro [Nashville] general obligation bonds to pay for public infrastructure,” and that could leave the city on the hook for “more costs if the stadium doesn’t generate expected revenue,” according to an October 2017 article in The Tennessee Star. Frankly, it’s hard to agree with Formosa’s stance in Hot Rod that, “I feel there is no danger of this Speedway going away in the next 10 years.”

And since all this broke last fall, it appears Formosa himself is recognizing the existential threat Nashville racing is facing. For it was the promoter himself who made a point to address the Music City 200 crowd during pre-race, stating the Speedway would close “over his dead body.”

Thirty miles southeast of the Fairgrounds, there stands such a dead body. In an industrial park off I-840 sits the desolate Nashville Superspeedway, a modern superspeedway that only seven years ago was hosting NASCAR’s XFINITY and Camping World Truck series. Today, it sits quiet under the surprisingly vigilant guard of security guards in white SUVs as tractor trailers haul away new Nissan vehicles being parked at the facility after being built.

It’s a sad, stirring reminder of much is plaguing stock car racing today. The main stand, which sits off-center on a huge patch of open asphalt, reminds all of how it was built by Dover Motorsports to expand once it got a Monster Energy NASCAR Cup Series race. Spoiler alert: that Cup race didn’t come, and Nashville became proof positive once again that without a Cup date, there isn’t a way to make a superspeedway work.

It’s a reminder that despite being in the metropolitan Southeast, stock car racing isn’t the draw it was. Just as undeveloped grandstand space scars the Nashville landscape, superspeedways in Atlanta and Charlotte have removed large grandstands in recent years.

And above all, it’s a reminder that what’s off-track, what’s not seen, is what will truly drive the future of racing in Nashville. It didn’t matter that the Superspeedway actually put on some memorable races, be it David Green’s dash to the front in the closing laps of the 2003 Pepsi 300 or Kyle Busch playing the spoiled brat role in smashing a Sam Bass guitar trophy (not all memories are positive). Today it’s a parking lot.

As for the Fairgrounds, it does appear to remain in Nashville’s (immediate) future:

Idle, dwarfed in the dark. Over a racer’s dead body? Maybe.

Good article. I was at the arca race; froze my C.A. Jones off but it was well worth it. The old fairgrounds sits on prime real estate in an area that the city would love to gentrify. It’s a sad story but without butts in seats it’ll meet the same fate as Lanier and other historic tracks. Hence my proselytizing about we the fans supporting our local short tracks (and starving the beast in Daytona).