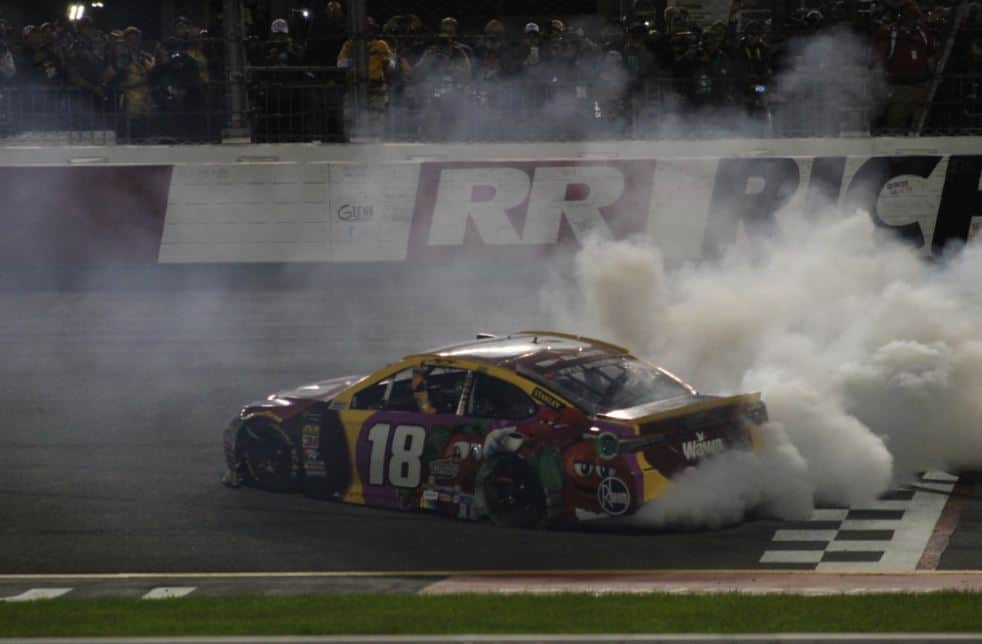 One of Kyle Busch‘s best tracks on the NASCAR circuit is Richmond Raceway, and in Saturday’s Toyota Owners 400, the No. 18 team proved it.

Busch started in 32nd, after turning just two laps of qualifying on Friday. Just 35 laps into the race, and the No. 18 team had cracked into the top 10, and soon after the top five.

It wasn’t until late in the race that Busch’s crew won the race off pit road, and put the No. 18 car out front. From there, he went on to lead the final 30-plus laps, en route to his third consecutive victory this season.

“You just gotta work, man,” Busch said in Victory Lane. “Can’t say enough about Adam Stevens and my guys. Pit crew, they won the race for me. Got us where we needed to be. It’s definitely cool we won three in a row. I don’t know you can shoot for four in a row at Talladega but we’re going to go and give it a shot.”

Chase Elliott finished runner-up, despite hovering for most of the race toward the back half of the top 10. Through a series of late race restarts, the No. 9 car cycled up to second.

“I’m not as frustrated to run second as I have before,” Elliott said. “To end there, in all reality, we didn’t really deserve to run second from a pace stand point. But from a pit stop stand point and with the way things played out, we ended up in decent shape.”

Denny Hamlin struggled most of the night but finished third. Joey Logano swept the opening two stages, leading 92 laps, and the No. 22 car finished fourth, while Kevin Harvick rounded out the top five.

Through the first two stages, the only cautions were the stage breaks. Meanwhile, over the final 47 laps, there were four cautions, one of which had Chip Ganassi Racing teammates, Kyle Larson and Jamie McMurray, swapping paint.

On a pit stop with less than 10 laps to go, Martin Truex Jr.‘s crew lost him seven positions, dropping him to a 14th-place finish. The No. 78 led a race-high 121 laps.

Matt DiBenedetto and Ty Dillon both finished inside the top 20, with much-needed runs. The Cup Series heads to Talladega Superspeedway next weekend, where Ricky Stenhouse Jr. is the defending winner.