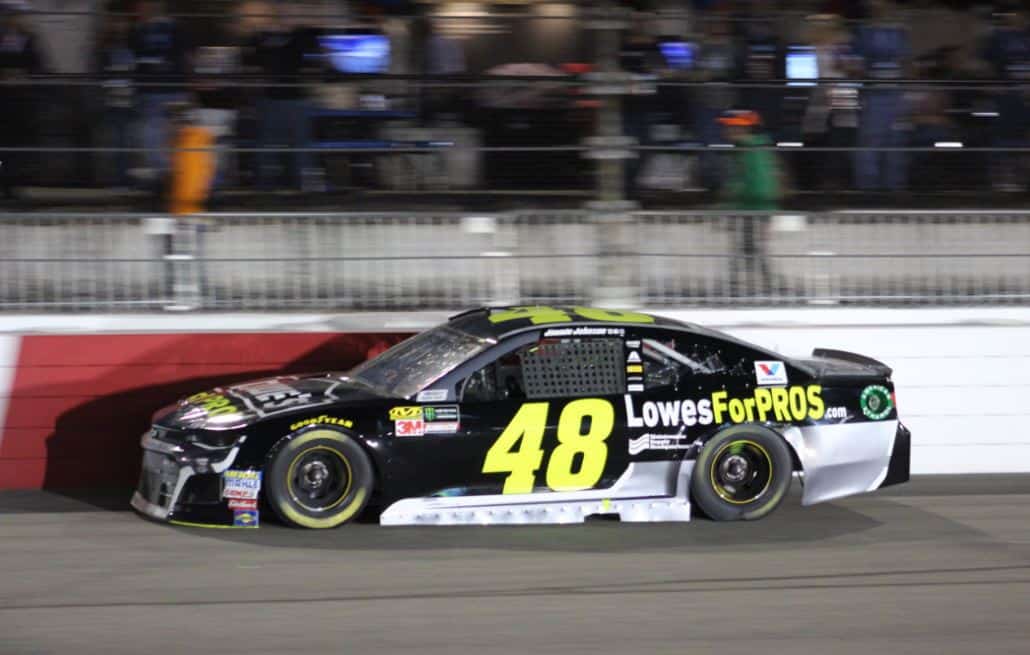 Jimmie Johnson headed to Richmond Raceway this weekend with some momentum after recording a season-best effort of third last week at Bristol Motor Speedway. Yet the weekend started off rough as the No. 48 team struggled in the two practices, then qualified 17th.

When the Toyota Owners 400 began on Saturday, Johnson fell backward, even hitting the outside wall in the first stage. The No. 48 car remained on the lead lap until race leader Joey Logano passed him with less than 10 laps left in the stage. He crossed the finish line 24th, after the 100 lap marker.

Following the conclusion of stage 1, Johnson’s crew chief, Chad Knaus, swung for the fence with his adjustments, losing four positions on pit road. Once the green flag came back out, the No. 48 raced better, but still ended Stage 2 in 22nd.

The final stage kicked off with a long green flag run of close to 150 laps. During that time, Johnson remained one lap down, though passing cars that the leader put a lap off the pace. The team climbed into the mid-teens, but it was a wave around following a lap 369 caution that helped Johnson get back on the lead lap.

When David Ragan spun on lap 391, it allowed for the entire field to come to pit road and get on the same tires, helping Johnson’s strategy.

With another caution and the two final restarts, Johnson jumped up to sixth, picking up his second consecutive top-10 finish for the first time in 2018.

“For whatever reason we’ve had a really tough time getting going at the start of races with the tires we’ve qualified with,” Johnson said of his struggles. “That was today. As soon as we got those tires off, we were a very competitive car and was able to stay on the lead lap.

“With the long green flag runs, still stay on the lead lap and work our way up through the field and then finally at the end got back on the lead lap. I don’t know what we’re missing on scuffed tires, but it’s something we’ve got to figure out.”

Johnson came into Richmond with a top-five finish at Bristol, his first since Dover International Speedway last October. Having fallen as far as 36th in the championship standings, Johnson is proud of his team’s effort, improving 10 positions in points over the past five races (currently sits 15th).

“We’re taking steps forward for sure,” he said. “I would love to take a jump forward, but we’re definitely taking some steps forward.”

The Cup Series heads to Talladega Superspeedway next weekend for the second restrictor plate race of the season. In 2017, the seven-time champion had finishes of eighth and 24th at the track, though remaining optimistic about what could be an insane race if the Daytona 500 was any indicator.

I am always amazed how JJ has been running mid pack, maybe a lap down and then winds up in the top ten. When he use to win all the time it just seem natural. Nothing exciting to watch. But now he is struggling to run up front and it shows how good he is to always comeback at the end. The opposite of that is Bubba passing cars to take the lead mid-race but ends up a lap down without any major drama or events that happened to him.