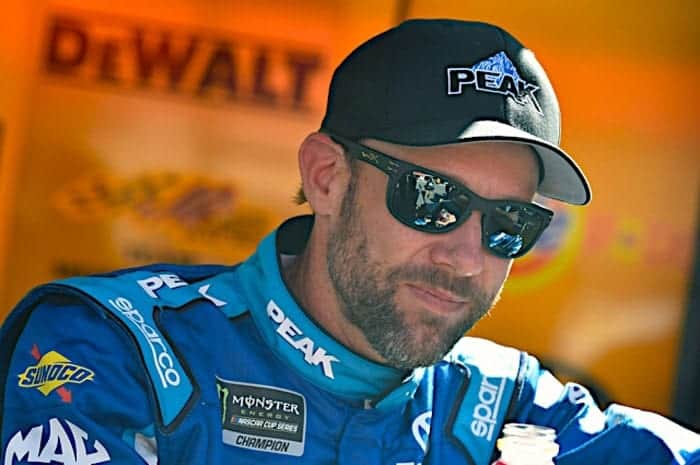 ONE: Matt Kenseth Returns. To Roush. Say What?

Five months after being pushed out of NASCAR, Matt Kenseth is back in the driver’s seat. A Monday night report from SB Nation’s Jordan Bianchi revealed Kenseth is heading back to the organization where he won his 2003 Cup Series championship: Roush Fenway Racing. He’ll share the No. 6 ride with Trevor Bayne the rest of the year beginning with Kansas next month.

Looks like Silly Season is starting early with a bombshell that rocked NASCAR Nation. Bayne, 27, has struggled with RFR, never living up to the hype of his 2011 Daytona 500 victory. He hasn’t led a lap since Daytona last July and sits a lowly 26th in points nine races in. The organization has appeared to take a step back after Ricky Stenhouse Jr. earned two wins and a playoff berth last season.

But to be replaced this quickly into 2018? It makes you wonder about Bayne’s health. He’s four-plus years into a diagnosis with multiple sclerosis and wants a life beyond driving. Slotting Kenseth in could kill two birds with one stone, evaluating the situation at RFR while easing Bayne out of a full-time role.

And as for Kenseth? Expect him to shake off the rust rather quickly. There’s precedent for another former RFR driver, Mark Martin, to go from near-retirement to a very successful “second wind.” At age 50, he finished second in points to Jimmie Johnson and tied his career high with five victories.

Kenseth, at 46, still has plenty left in the tank and remains familiar with core RFR personnel. You don’t drive for a team for 14 years and suddenly forget how the sausage is made. This team could be the long-term opportunity he needs to jump back into full-time competition.

Regardless of circumstances, it’s a great signing for RFR. Nowhere to go but up for both Kenseth and Bayne, whose driving can only be helped by a veteran role model.

Starting 32nd, it took 273 laps for Kyle Busch to push to the front Saturday night at Richmond Raceway. The Monster Energy NASCAR Cup Series star was battling track position all night. But in crunch time, his No. 18 Toyota steered clear of its main competition: Kevin Harvick and Martin Truex Jr.

Sound familiar? It should be. Last year’s top three in points have nearly swept this year’s Victory Lane, going seven-for-nine to start 2018. Busch’s win gives him three straight, a total matched by Harvick earlier this year while Truex took first at Fontana.

Only Clint Bowyer (Martinsville) and Austin Dillon (Daytona) have been able to sneak through with wins of their own. The Harvick-Truex-Busch trio has lapped the field in scoring 36 of 56 MENCS playoff points awarded, a total that would be higher if not for Harvick failing Las Vegas post-race inspection.

Their sustained success has put a damper on NASCAR’s “young guns” theme to start 2018. So much for new blood; these men have spent years as title contenders and are well known to casual racing fans. Names like Ryan Blaney and Chase Elliott (second at Richmond) can’t compete when this trio is putting ten seconds on their closest competition during long green-flag runs.

They’re also very evenly matched. Each driver has one MENCS title, a top-tier alliance and experienced crew chiefs who have won under this format. Who gains the edge could come down to a team effort outside their control: pit road.

Right now, Busch and Co. have the edge. The No. 18 team put him out front during the final two stops of the night. Truex’s team stumbled during that stretch, trapping him in traffic while Harvick was still fighting back from a pit penalty suffered early in the race. Those troubles have been trends for both men in recent weeks as their teams have lost the battle for track position.

That puts Busch in the catbird’s seat… for now. But one wreck at Talladega could stifle his momentum. Expect these three to trade off the “best driver” title through most of the spring and summer.

THREE: Putting The Good In Goodyear

We often criticize Goodyear for poor compounds that lead to either blown tires, poor racing, or both. So let’s give them credit where it’s due: their Richmond setup was fantastic.

All night long, we saw falloff with cars capable of running side by side. Short-run cars would jump out early and then get reeled in by long-run setups where the tires held. The speed differences were fascinating to watch and even caused a short pit strategy by Stenhouse Jr.’s crew in stage one. The No. 17 team made up not one but two laps with an extra stop, incredible to watch in a move quickly copycatted by others.

In stage one, you also had the long-run speed of Aric Almirola come up from six seconds back to fall just short of beating Joey Logano. There was unpredictability, flexibility with adjustments and cars going back and forth on the grid all night long.

If Goodyear can bring that type of muscle every week, NASCAR might be onto something.

FOUR: Johnson On The Comeback Trail?

Lost in the shuffle of Busch up front was the fight shown by Johnson and the No. 48 team. The first run for them on scuff tires was terrible at Richmond; the car scraped the wall and Johnson ended stage one a lap down.

It took literally almost 300 circuits for him to get that lap back. But crew chief Chad Knaus kept working on it… and working on it… and all of a sudden, like the old days, he caught lightning in a bottle. The No. 48 car spent much of the second half of the race as the fourth or fifth-fastest car on track.

So when a late yellow hit, over 350 laps in Knaus gambled on the wavearound thinking cautions breed cautions. He was right. A spin less than 10 laps later put Johnson on the lead lap for good; it was a fight for track position the rest of the way.

Daring moves and three-wide action put Johnson in sixth by the end of the night. He now has back-to-back top-10 finishes for the first time since Dover and Charlotte last fall. And did I mention he’s back inside the top 16 in points?

Watch out. At some point, the Chevy teams will figure out their new Camaro ZL1 body and Johnson, at 42, will be a force to be reckoned with.

Finally this week, a shoutout to Noah Gragson who ran second in his NASCAR XFINITY Series debut. Coming within car lengths of knocking off Christopher Bell, the performance was an unexpected surprise for a 19-year-old teenager many feel has underachieved.

That left him on the hot seat through even the start of this season. But Gragson’s run is a reminder sometimes a different type of car makes an impact. Check out Johnson’s XFINITY career, for example: did it ever turn heads? Only one career NXS win isn’t exactly an eye-popping resume.

So maybe a promotion, as crazy as it sounds, is what Gragson needs to turn the corner. We’ll have to see if someone, JGR or otherwise is willing to give him that chance.

Kenseih has no shame or honor. Figures he would have a wad of cash stashed somewhere, you know family time with his very young children. LOL. GRANPA’s ego is to much. These people are a freaking trip. The ego is amazing. Stay clear of the nut job…one never knows. UGGHHH. The drama queen and egotist is back in the car. Jack, WTF? Do they still do random pee tests? Just asking. Sad and pathetic.

I just knew you would be on here again today, spewing your venom at Kenseth. In the last 3 days, Kyle Busch wins for the third time in a row and Matt comes back. Your head must be ready to explode! All for the love of Lil’ Joey.

Wow! There’s the pot calling the kettle black! All you ever do is spew venom, especially at anyone who doesn’t worship the ground Kyle Busch walks on. But then again, what would anyone expect from a lady lawyer that probably got her behind reamed by a judge for unprofessional behaviour in a courtroom.

LOL! Judges love me. And Kyle is only one of my two favorites. I defend my other fave just as much. It’s the mama bear in me.

It appears that seven years is the current standard for milking a single crapshoot plate win.

I was never a Kenseth fan but the way he got forced out at JGR didn’t sit right with me. I am glad to see him get a second chance, although he will have his work cut out for him at Roush.

The real test for Johnson will be the next 1.5 race at Kansas as well as Dover in two weeks. Personally, I love seeing him struggle.

Didn’t think Roush would be willing to write a check that large.

Since he will be sharing the ride with McBayne (i.e. part time), I am sure the check isn’t as large as you might think.

Think he can reduce the size of Baynes check? If not I stand by my point.

Glad to see ol’ Kenseth back in a car. This could be interesting. ; )

When I first saw this, I also wondered about where Bayne stood with his MS progression.

Good to see Matt back.

Trevor seems like one of the nicer guys in the garage, and I hope this doesn’t mean that his MS has progressed. The 6 car’s performance has certainly been abysmal. I guess this may just be a way of evaluating where the problems are. However, if you listen to scanner traffic, it seems that other drivers are more concerned about being in a wreck if they are racing the 6.