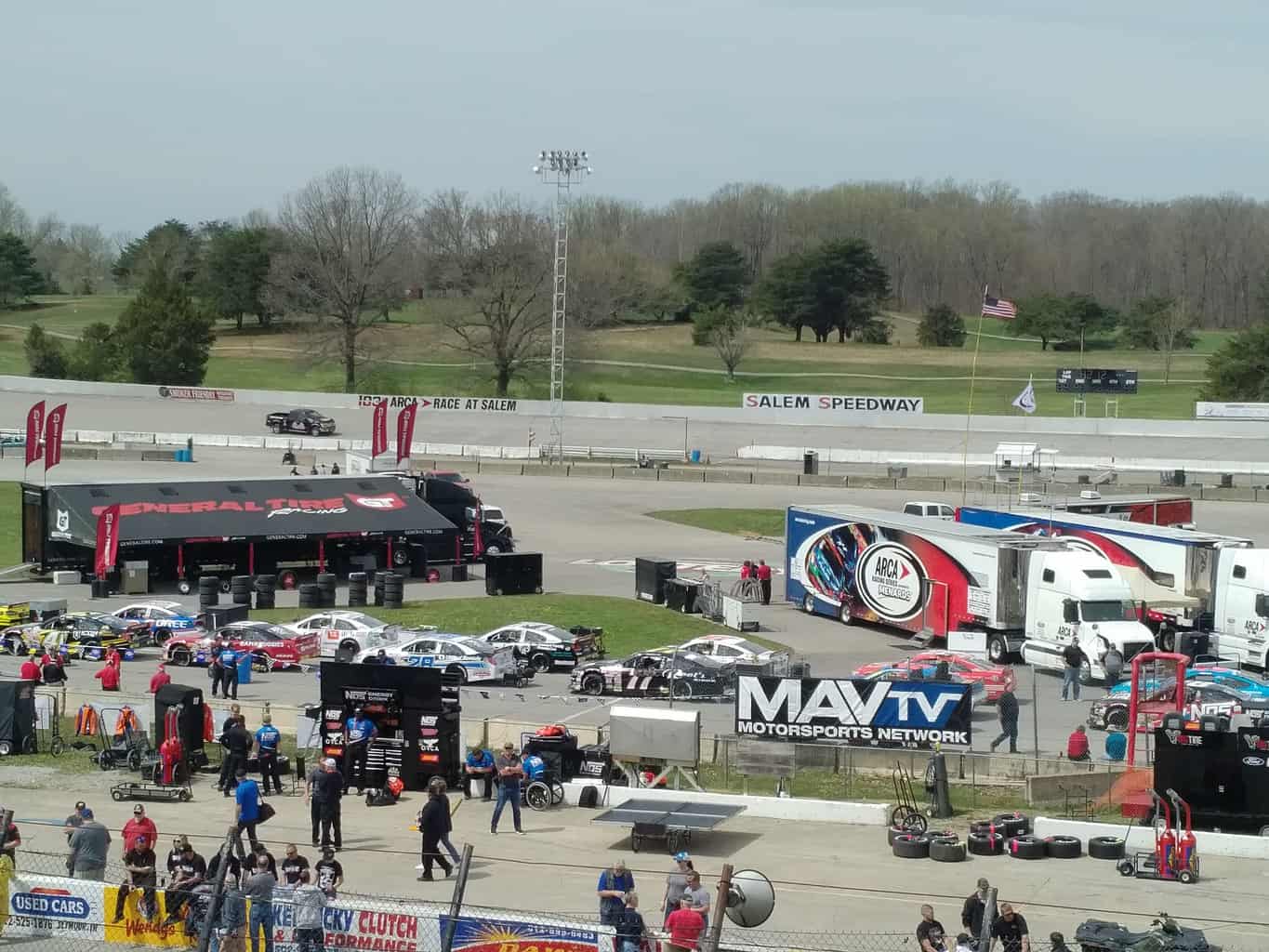 Chandler Smith stole headlines at Salem all weekend. Natalie Decker has been stealing headlines all season even before winning the pole at Daytona. But on Sunday in southern Indiana, it was the other Venturini car that found its way to Victory Lane.

Christian Eckes, who incrementally improved the No. 15 Toyota from a short run car to a front-runner, took the lead from his teammate Smith on pit road after a lap 147 caution and proceeded to weather challenge after challenge from Smith to score his first career ARCA win. Smith pounded the turn 1 wall on the final lap (he would report to the team after the race that his brakes failed) and failed to finish. Zane Smith, Sheldon Creed, Josh Berry and Chase Purdy rounded out the top five.

The final 46 laps of green flag racing saw Eckes field countless challenges from Smith, who after becoming Salem’s youngest polesitter on Saturday, led 117 laps and was arguably the best car in the race. However, stubborn lap traffic and resilient driving by Eckes allowed the No. 15 to keep the No. 20 at bay. Smith challenged early in the run as well for the lead but faded to the Venturini entries down the stretch.

Creed rebounded from a slow start in the first 50 laps of the race to finish third and unofficially take the ARCA points lead. Actual point leader Michael Self did not enter the weekend’s race at Salem.

Eckes almost seemed lost in the shuffle Saturday among the Venturini Motorsports camp, with 15-year-old Smith topping the practice and qualifying charts and Decker being a female race car driver. Eckes showed up to play Sunday though, proving to have a rocket on the short run that allowed him to take the lead early from Smith on several restarts, only to have the No. 20 reel him back in. Each run, however, the No. 15 got better and held off the No. 20 a little while longer, setting the stage for the final run to the checkers.

Eckes drove a near picture perfect race, dodging lap cars at will and continually stealing the high line that Smith needed to be at his fastest. Eckes did benefit from being raced by his teammate (Venturini ownership was continually instructing Smith to race Eckes clean), but the charges Eckes held off took real talent. A well-deserved win.

Speaking of Smith, hats off to this kid for far more than scoring consecutive poles as a 15-year-old. Smith’s performance behind the wheel, especially during that final run that saw him unable to get past Eckes, demonstrated both composure and maturity. Not once did Smith get in over his head driving into the corner in pursuit of the lead, nor did he scrub the wall until pounding it on the last lap with apparent brake failure.

Though for the second race in a row Smith lost spots on pit road with the lead on the line, and though he was bested on the restarts in numerous instances, Venturini Motorsports has a got a gem with this 15-year-old. He’ll be a threat in any race he enters this season.

50 laps into Sunday’s race, MDM Motorsports looked nothing like the organization that swept the podium at Nashville two weeks ago. Smith was the only driver in the top 10, both he and Purdy had lost numerous spots from where they started and Creed had dropped so far back that the team was telling him strategy or not, tire conservation or not, he couldn’t give up as many spots as he had.

It almost seemed if the team was thinking too big picture, too focused on saving tires to challenge for the win. Fast forward to lap 200, and MDM was right back where they expect to be: up front. Smith proved to be the only car outside the Venturini camp to have a prayer of victory in the final laps, Creed climbed all the way back to third to maintain the points lead, and Purdy scored his first career top-five finish. The consistency coming from this camp is going to prove formidable as the schedule ramps into the busy summer months.

Josh Berry’s ARCA debut saw him deliver Chad Bryant Racing its first top five of the season. Berry faded during the race’s first run and even fell out of the top 10 after being the only leader to stay out on old tires under the race’s first caution, but the decision to save rubber for later paid off as Berry made his way back through the field.

Will Kimmel, who still receives among the loudest ovations at the Salem Speedway, went the distance after a start-and-park effort at Nashville. He finished 12th.

On paper, seventh doesn’t look bad. But it’s just another reminder of the snakebit start to the season Gus Dean has endured. The driver of the No. 32 was arguably the star of the race at Daytona, challenging for the lead in the draft without a fender before the big one bit him. He lost a top-10 finish at Nashville thanks to a dead battery.

Fast forward to Salem, where he had a strong fourth-place qualifying effort, moved up into third on lap 20 and was a strong contender when it came to the first yellow. Under that yellow, one of Dean’s crew members got struck by a car when the No. 23 of Bret Holmes and the No. 15 of Christian Eckes collided on pit road, miring Dean the last car on the lead lap and leaving the No. 32 team to pit the car while one of their own writhed on the asphalt. The ambulance responded to their pit, but the crewman opted not to be transported. Dean battled back, but never overcame the lost track position.

Speaking of Holmes, the No. 23 may have been the best car not driven by Chandler Smith in the first 50 laps of the race, as the Alabama driver stormed from 11th to second by lap 50. Holmes, however, suffered minor fender damage in the pit road incident that affected the No. 32 team, and despite holding his own the next run, be it psychological or other factors, the No. 23 wasn’t the same after that.

Decker had the Venturini flagship No. 25 flying high early in Salem, charging from 12th into the top five during the first run of the race. Caught in the traffic from Eckes and Holmes tangling on pit road, Decker fell back into the pack at the back of the top 10, and around lap 84 was involved in an incident with the No. 27 of Travis Braden (of note, the view of this incident was obscured for many in the stands). The No. 27 team, however, admonished Braden over the radio immediately following the yellow flag, suggesting the No. 25 found themselves victims in this case. Whoever was at fault, the right rear of the No. 25 was crushed, and despite the best efforts of the team to repair it, the car never handled the same for Decker after that, as she eventually pitted under green around lap 97 for handling adjustments. Decker finished the race eight laps down in 17th.

Dale Shearer, branded “ARCA’s favorite grandpa” during driver intros, saw his first start since Springfield last year ended early after a hard wreck on lap 53. It remains to be seen when he’ll be back, given the damage to his No. 73.

It’s very, very hard to write anything negative about Darrell Basham Racing, given the time and effort they have dedicated to their ARCA racing efforts over the last decade. But the No. 34 car of Mike Basham played an inordinate role in determining the winner of Sunday’s race.

A lapped car well off the pace is nothing new in ARCA competition, but Basham’s positioning on the race track slowed or stopped at least two runs Smith had for the lead on Eckes during the race’s final run. Basham also had one run through Turn 4 where he visibly pushed up the race track as Smith was attempting to pass on the high side, leaving him with inches to spare.

Travis Braden was just as guilty of this on lap 186, as he stacked up the two leaders to the point they hit each other, but Braden was battling for the lead lap at that time. The No. 34 team should have used more discretion when running five laps down.

Go figure, it’s Mike Basham and the same No. 34 team. Having blown an engine right after qualifying on Saturday, the No. 34 team worked the entire night to repair their car for the race. It was a truly close shave. Mike Basham waved to the crowd from the team’s workspace in the infield instead of taking part in driver introductions, with the team finishing repairs and sending their car to the starting grid as Salem officials were introducing the top five starters in the race. In a race that was already short on entries and lost Brad Smith’s No. 48 to a blown engine before the race started, the Basham team deserves a lot of applause for getting their car put back together and going the distance.

The ARCA Racing Series heads back south to the Talladega Superspeedway for a Friday evening shootout in Dixie. Coverage of the General Tire 200 can be found at 6 p.m. ET on FS1.

It’s really a shame that ARCA takes second place to nascar in terms of popularity & viewership. Except for the handful of nascar cookie cutter & restrictor plate tracks they go to , the racing is far & away better.

Here is a side story for you Natalie told my 5 year old daughter to come back to the autograph session to get a autograph and take a picture when no other fans around!