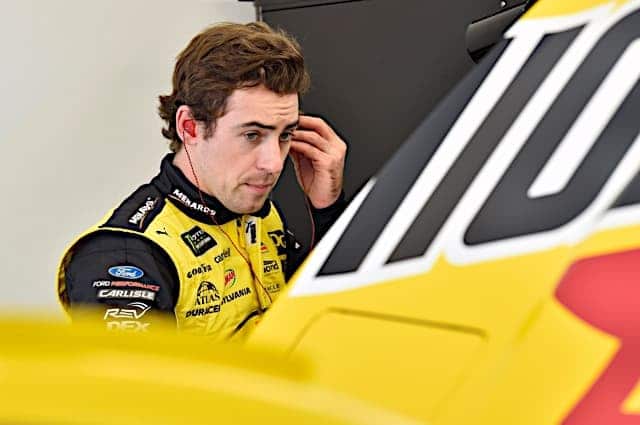 The 2018 Monster Energy NASCAR Cup Series season is now one-quarter finished after the third short-track visit of the year to Richmond Raceway, the first short track weekend not to be plagued by weather delays.

To Busch’s recollection during his Victory Lane interview with Fox, it was the first time a Toyota had captured the Toyota Owners 400.

The track conditions changed often, there was passing and battles for the lead throughout (Logano, Bowyer and Kurt Busch at the end of stage 2 was a highlight), and except for the final eighty or so laps, the pace zipped by, wrapping up in an overtime sprint to the finish.

Not that it hasn’t already been mentioned, but this was Kyle Busch‘s third win in a row (with three different sponsors). Daytona wasn’t great, finishing 25th in his 13th attempt, but since then? Finishes of seventh, second, second, third, and second before the hat trick. Also, Rowdy is leading the standings with 415 points, he’s sat on the pole for two races and he’s won two stages.  Plus he’s scored the most stage points (108) and playoff points (17) than anybody else.

For the second week in a row, Ryan Blaney had someone derail his race by spinning right in front of him. He wasn’t leading when it happened like last week at Bristol (35th place), but the lengthy repair job took what could have been another top-10 day and turned it into a 22nd-place result. He still sits comfortably within the playoffs cutoff, in ninth with 282 points.

At the site of his last win (in the spring race), Logano led 92 laps, won both stages and posted a top five.  In the last five races, Sliced Bread has finished fifth, fifth, sixth, ninth and fourth. The only time he’s finished outside the top 10 this season was at ISM Raceway (Phoenix), where he ran 19th. His season average is 6.1, which is very good indeed.

This wasn’t the night for Richard Childress Racing. Of the main team, Austin Dillon led with a 15th-place run in the No. 3, while Daniel Hemric was never really a factor in his MENCS debut, finishing 32nd in the return of the No. 8. Ryan Newman was involved in a rare caution on lap 368 and finished next to last at 37th in the No. 31. Among the RCR satellite teams, Ty Dillon was the highest-finishing driver, piloting the Germain Racing No. 13 to 20th place.

Matt DiBenedetto drove the Go Fas Racing Ford to a 16th-place finish, the second top-20 result in three races for the underdog No. 32 squad. They finished 15th at Texas, but the lack of attrition (all but two of the 38 cars were classified as running at race’s end) at Richmond makes this result far more notable.

This is the third race out of the nine run so far without a single lap led by a Chevrolet. While Elliott qualified and finished with his Camaro ZL1 in second place, he stated that he didn’t feel the result was earned. Seven-time champion Johnson was sixth for his third top-10 of 2018, and while Chip Ganassi Racing’s Larson finished seventh, this race might be remembered for the bumper cars between Larson and his teammate Jamie McMurray under caution.

Paul Menard‘s No. 21 Wood Brothers Racing Ford was wrapped in Quaker State colors this week, and while the result (24th) wasn’t likely what they wanted, the green and gold color scheme looked great under the lights. Menard has been yo-yoing back and forth with results so far this season, after two top 10 runs at Daytona and Las Vegas, he’s finished 35th, 19th, 13th, 30th and 13th before this weekend.

Up next is Talladega Superspeedway, the largest track on the MENCS circuit at 2.67 miles. It’ll be chaos, like almost all restrictor-plate races, though hopefully not as much of a demolition derby as the last time NASCAR visited the Yellowhammer State. You can’t pick out a winner for certain, but a good bet would be on a Ford driver. Not just because of the recent dominance of Penske and SHR – though that is a factor, especially considering Ryan Blaney’s leading the pack for most of the Daytona 500 – but more because last year’s ‘Dega races were swept by Ricky Stenhouse Jr. and Brad Keselowski. In fact, the last five Talladega races have been won by Fusions, and six of the last seven, dating back to October 2014.

I’ll say either Ryan Blaney or Ricky Stenhouse Jr. will survive. Or a total dark horse will come from nowhere, like Keselowski’s 2009 win for Phoenix Racing:

The GEICO 500 begins around 2 p.m. ET on Sunday, April 29, with television coverage on Fox.