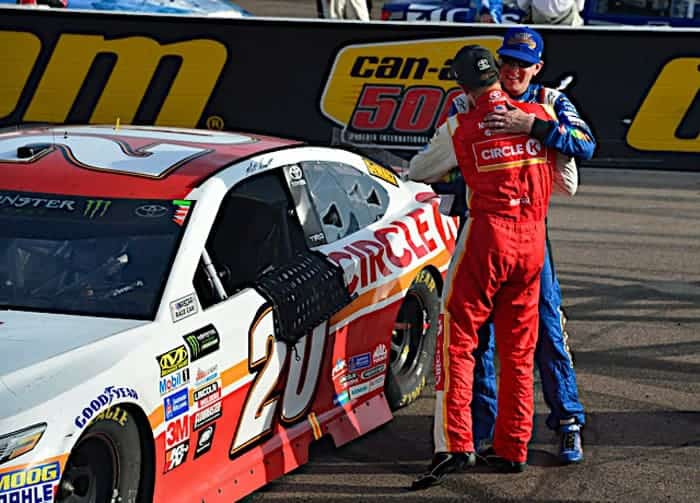 It isn’t often that a major NASCAR bombshell randomly falls in April. Oh, and the guy who is causing everyone in the NASCAR realm to freak out this week is known for being one of the most laid back people in the sport.

Yeah, Matt Kenseth is coming back, according to a report by SB Nation’s Jordan Bianchi, which will be confirmed during a Wednesday morning press conference at the NASCAR Hall of Fame.

Obviously, the news of Kenseth’s almost immediate return is quite stunning given the circumstances of how he departed Joe Gibbs Racing at the end of last season. He won his penultimate race in the No. 20 car, and did so as now sophomore Erik Jones prepared to take over that ride.

With Kenseth’s return to Roush Fenway Racing for allegedly the majority of the season, it brings up many unanswered questions about the circumstances surrounding RFR and current No. 6 car driver Trevor Bayne, who is being sent to the sidelines for Kenseth’s return.

As the Monster Energy NASCAR Cup Series hits the restrictor plate track of Talladega Superspeedway, it could be a time for Bayne to show off his skills as his job appears to be on the line. Can he steal a victory, or will another underdog bring home the triumph and lock themselves into the playoffs?

Reading the report Matt Kenseth is coming back like pic.twitter.com/9ThNTrWYhb

A: This news is a bad sign for Bayne’s future. He was already rumored to have his ride in jeopardy at the end of last year, but this is a huge step down for him.

The No. 6 team stabilized over the last two seasons, finishing 22nd in the standings both years. But the start of the 2018 season has been difficult for Bayne, who sits 26th in the standings with a 23.9 average finish out of a field that is usually 37-39 cars.

The only race when Bayne showed he could get the job done still was at Texas Motor Speedway when he ran in the top 10 for a chunk of the race and ended the day in 12th, a respectable result. Other than that race, he’s earned just three top 20s.

We won’t know the exact reason why RFR is making this move until the Wednesday morning press conference, a few hours after publication. However, what we do know is that Kenseth’s return is huge for the sport.

It is clear Kenseth didn’t want to stop full-time Cup racing. His performance last year — finishing seventh in the standings — indicates he is still capable of getting the job done, even at the wry age of 46.

No opportunity to race in a top-tier car was available, and it seemed like Kenseth was done altogether. His comeback seems a bit odd, especially since he’s making a return to Roush, a team he spent 13 seasons with, highlighted by winning the 2003 Cup championship.

Kenseth’s return essentially means Roush is done playing games. It’s not to say RFR was actually playing games, but it needs to figure out what is wrong with the No. 6 team, which appears to be several steps behind Ricky Stenhouse Jr.’s No. 17 squad.

On paper, Kenseth will undoubtedly out-perform Bayne, who has never earned more than two top fives and six top 10s since going full-time in 2015. While he might not have been far behind Stenhouse at times and ran better than Greg Biffle in 2016, the higher-ups at Roush Fenway Racing are ready for a change.

Kenseth will provide the organization a fresh — rather renewed — perspective as to what is going on. What if it’s just the driver? Does that mean Bayne needs to start looking for a new ride now? Was sponsor AdvoCare pushing for a new driver? How in the world did Roush convince Kenseth, who seemed to make peace with his future as a retired driver, come back for an alleged majority of the rest of the year?

While Kenseth will be a bit rusty and the equipment likely won’t let him compete for wins most of the time, he might be able to rack up a few top 10s. Since he isn’t running for a title, he’ll be able to push the equipment more than usual. What does he have to lose?

If AdvoCare and other RFR partners like him, could we potentially see him return to full-time racing in 2019? It would certainly be an unprecedented move considering the guy seemed like he was over and done with it.

Let’s just hope Bayne’s health isn’t acting up because that would be a shame. He’s young and has a great family. But no matter what, he has his NASCAR family to support him.

Q: Who can be an underdog winner at Talladega this weekend? – Kaitlin A., Charlotte

A: Talladega is so amazing just for this reason alone. The unpredictability of this 2.66-mile facility is one of the beauties of NASCAR, and this weekend’s GEICO 500 should be no different.

There is always the element of surprise during restrictor plate racing, but let’s face it: Who is going to beat Brad Keselowski, Stenhouse or even Kyle Busch? Probably not many drivers, but the unthinkable can always happen — just ask David Ragan.

Expect to see Darrell Wallace Jr. follow-up his fantastic Daytona 500 run with another stellar one this weekend. The No. 43 team is getting stronger as the season goes on, and Wallace could have a great showing at Talladega.

As usual, the Front Row Motorsports duo of Ragan and Michael McDowell will certainly do well should they stay out of trouble.

And that’s the key: staying out of trouble. Who can avoid the Big One?

There are a few unusual names on the entry lis, and some who are making their return, including Brendan Gaughan, Cole Whitt, Cole Custer and even Timothy Peters making his Cup debut.

Can any of these people make their way to the front of the field on Sunday?

Tee shirt and cap sales will likely increase in the short term.

Toyota screwed up again. First they ignored Larson when he was looking for a ride, then was the force behind getting Kenseth fired. Hope he does well. I’ll read about it Monday.