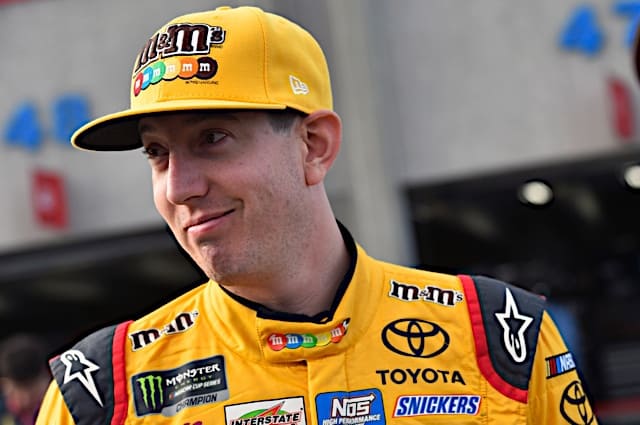 Busch was able to secure his third straight victory of the 2018 season on Saturday. He became the second driver of 2018 to pull three straight victories with Kevin Harvick winning Atlanta, Las Vegas and ISM Raceway earlier this year. The combination of mistakes on pit road by Martin Truex Jr.’s team and Busch’s crew churning out fast stops put a lock on his first Richmond victory since 2012.

Now the Monster Energy NASCAR Cup Series heads to Talladega Superspeedway where Busch has a single win — however, that win was 10 years ago.

You have to wonder if he has it in him to earn four in a row.

When Brexton misses Victory Lane, we bring it home to him! pic.twitter.com/RODZ049IKU

That Richmond magic almost returned for Logano on Saturday night. Early in the race, it looked like Logano was going to be the driver to beat.

After winning the first two stages, he lacked the speed he needed to be a factor for the victory and ended up fourth, tying his best finish of the year so far as the series heads to Talladega, a track Logano has had much success in the past.

Logano finished fourth in the last restrictor plate race, so it’s easy to look ahead to this weekend with the potential for him to break through once again. He’s never earned a victory in the spring race at Talladega but has two victories in the fall race. Could Sunday be the day that Logano breaks through and punches his ticket to the playoffs?

Another quiet top-five finish for the No. 4 team this weekend as Harvick ended up fifth. With another consistent run, Harvick earned his seventh top 10 in nine starts this season.

Much like the previous two drivers on the list, Harvick has also had his ups and downs at the Talladega Superspeedway, including a victory in the spring race in 2010. Perhaps what might be more telling about his chances this weekend is that Harvick has finished all but one race at Talladega since joining Stewart-Haas Racing in 2014.

Another top-5 for @KevinHarvick in large part to @Mobil1 in the car and on the hood. ?#SHRacing10Yrs pic.twitter.com/7IU5iOtYsi

Bowyer posted another consistent weekend at Richmond where the final results didn’t tell the whole story as to how good the No. 14 was during the race. He finished fifth and second in the first two stages, but much like Logano, Bowyer didn’t have the same type of speed in the final stage and wound up ninth.

Bowyer is another one of those drivers who has had his share of highs and lows at Talladega with a total of two victories. On the flip side, he also has six finishes outside the top 30 at Talladega which shows the truly unpredictable nature that is Talladega.

Collecting stage points and leading laps!! We keep this up and we’ll win some more this year. Car was awesome on a long run. Was shaping up to be a helluva race between the 78, 4, and us until the caution came out and all hell broke loose. Then it’s dive bomb city from there!

Despite not leading a single lap on Saturday, Larson left Richmond with another top-10 finish. The real story of the race wasn’t his finishing position but his run-in with teammate Jamie McMurray, who seemed to show his displeasure with the driver of the No. 42.

Is conflict beginning to brew in the Ganassi camp?

We're not sure why Jamie McMurray is upset with his teammate Kyle Larson … but here's what we saw. pic.twitter.com/rVg3l6SZ3Y

Talladega hasn’t been a very good track for Larson over the years with only two finishes inside the top 10 in a total of eight starts. He usually gets caught up in an accident and is left to limp around until the finish.

The key to Larson’s success, like everyone else, on Sunday will clearly be to keep all four fenders on it and stay out of trouble.

The Johnson we all remember may be on the verge of a return. He was able to find his way into the top 10 late in the race and almost stole his second straight top five of the 2018 season. As momentum begins to add up, things are starting to look up for the No. 48 team and Hendrick Motorsports in general.

Hit or miss has been just what Talladega has been for the No. 48 team. Engine issues plagued Johnson in the early part of his career at Talladega while recently he has not been in the right place at the right time to capitalize and secure a strong finish, let alone a victory.

Something was amiss this weekend for the No. 12 team and Blaney failed to earn any playoff points. After dominating a majority of the race the previous Sunday in Bristol, we’ve come to expect that Blaney would at least compete for the top 10.

That didn’t happen. He finished 22nd, his second straight result of 20th or worse.

This weekend, Blaney makes his 100th Monster Energy NASCAR Cup Series start at one of his statistically best tracks. Plus, he dominated the last time the series raced at a superspeedway, so he has to be a favorite.

What happens when Rowdy Burns meets up with Ryan Blaney?

Another second-place finish for Elliott Saturday marked the eighth runner-up result for the Dawsonville, Georgia native. The first victory is just around the corner for the driver of the No. 9 but the speed has to be there first.

On Saturday, the speed was there. Despite only earning stage points in the first stage, Elliott still kept at it and landed with his best result of the season.

Talladega has always been a special place for the Elliott family and on Sunday, it could become even more special. Now that the pied piper of superspeedway racing has retired, Elliott has big shoes to fill in the form of the most popular driver at Talladega.

The first victory could be just around the corner.

Saturday somebody asked me if I’d ever be as good as dad, I told em I had a long ways to go to catch up…. but here ya go sir from RVA, gotta start somewhere ??‍♂️ https://t.co/fBrKLY4skb

Busch had a solid outing on Saturday night. He led some laps, finished inside the top five in both stages, and earned another top-10 finish behind the wheel of the No. 41. It seemed as though Busch had the speed to earn his first victory since the Daytona 500 in 2017.

In recent years, Busch has been in a position to go to victory lane at Talladega, but he has never been able to seal the deal. He has driven everything from the underfunded James Finch cars to the high-end Stewart-Haas equipment and has shown he can be a contender at the 2.66-mile track in Alabama in anything you put him in.

Solid first 3/4 of the race. Too many troubles to overcome in the last 1/4 to finish strong. Steady as she goes. pic.twitter.com/9a59IQmfV9

Suarez earned his second top-10 finish of 2018 on Saturday night. The driver was pretty quiet after starting 26th but somehow found the speed, took advantage of late cautions and put a lock on that 10th-place finish. Suarez is improving as he’s approaching some of these tracks more and more.

Suarez almost found victory lane at Talladega last October but ended up collected in a crash with Elliott. It’ll be the third time that Suarez has piloted a Cup car at Talladega and, with a little bit of luck, he could pull off his first career victory.

Wild finish! Happy to get a top 10 with the @ARRIS #Camry! #ToyotaOwners400 pic.twitter.com/aSO1v9oUdx

I’m sure it will come as a surprise to Harvick and Busch to see that Kevin won Bristol. But mistake-free days are hard to come by for drivers and writers. But I truly do lament the passing of “editors” in the current news media.

DAMMUN, you would think with the cash he is raking in, his lawn would be in better shape The old nasty looking old man and the MINI ME….WOOF!! IMO