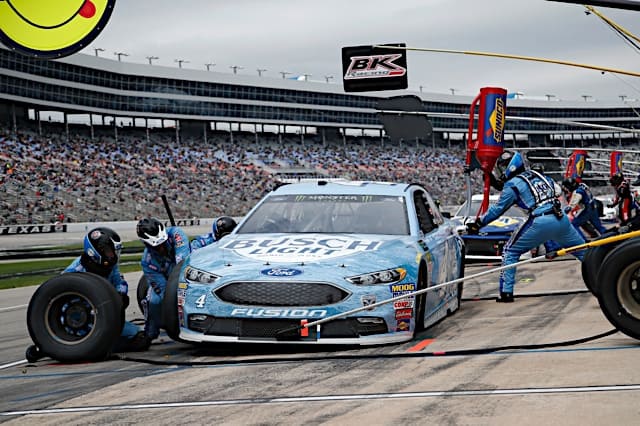 This week’s column is going to start with a bit of questioning regarding the management dealing with races.  Chronological order comes across as a good way to start. That means touching upon the peculiar start time for the Monster Energy NASCAR Cup Series race at Richmond on Saturday night.

Who exactly is the brain-child that thought moving up the start time would be a good idea?  Sure, having drivers and teams deal with the change from daylight to night adds an element to the racing but the start time just felt awkward.  That the race was run at all on Saturday night was also something worth examining as springtime in Richmond would appear a ripe fit for running the race on Sunday, rather than having your customers sit through a chilly night.  But since when has NASCAR cared about their customers?

Oh my. In their rush to try and get things started, and by dropping the green flag on a very wet track, they ensured that their customers got shafted out of seeing a number of drivers, ya know, actually race because of early wrecks.  The fact that they dropped the green flag a second time when a number of drivers indicated the couldn’t see, a decision that ended Will Power’s race, just illustrated the peculiar sense of urgency that surrounded the event at Barber Motorsports Park.

Was IndyCar going to have to give a deposit back or something if they didn’t start on Sunday?  Egads. Err on the side of caution next time.

As long as those cautions aren’t for phantom debris.

Happiness Is…Pits.  Kyle Busch didn’t deserve to win last weekend at Richmond Raceway.  He was a second or third-best car. These statements don’t seem to be any kind of inflation of fact, nor are they a way of going against the talent Busch possesses.  By most measures, he was good, but not stellar and looked to finish the race with what used to be called “a solid points day.”

Yet KyBu did win, and he rightfully thanked what was responsible in his post-race jubilation: the work in the pits.  His team performed wonderfully, either maintaining his positions or, as seen toward the end of the race, gaining him the top spot.

In many ways, this story highlights the importance of good pit work, as Martin Truex Jr. lost his place in the top three because of a pit road gaffe, while Busch snuck a win.

At times, the stories from the pits have been overwrought, using that area of the race to mean way too much in the outcome in respect to, ya know, the actual driving. And the current pit road air gun has become their own issue, made even more manifest with the fact that NASCAR has mandated that all teams use nitrogen to power the guns henceforth. That’s right, teams had switched the gas powering the guns in an effort to gain competitive advantage.

The guns still may be a story going forward, but last weekend demonstrated the very crucial aspect of how flawless stops can make all the difference in the world.

Happiness Is…Baku.  This weekend, Formula 1 returns to Baku for the Azerbaijan Grand Prix.  The history of this race is lengthy and features stories that have changed the sport in a number of ways, especially the … no, not really, the series has visited the Baku City Circuit just twice before.

The first running on the streets of the city was held under the European GP moniker and by racing standards, can best be described as tame.  The race had predicted to be a wild one because of the tight confines of the course but instead, all four of the retirements in the 2016 iteration came as a result of mechanical failure.

Last year’s race provided everything that the previous one had not.  Teammates tangling. Over-driving. General lack of functioning brains. Even Sebastian Vettel losing his mind and sideswiping Lewis Hamilton under caution.  To be more simplistic: it was awesome.

Daniel Ricciardo stole a win, Valtteri Bottas snuck by for second, and Lance Stroll somehow managed to take the final spot on the podium, becoming the second youngest driver to earn a podium position.  To expect such a thing again would be foolhardy.

That doesn’t mean that it should go back to being tame. The last race, the Chinese GP, showed that it doesn’t take much to turn what looks like a straightforward affair into a total mystery. With young drivers for both Toro Rosso and Williams, the sense of pressure that Lewis Hamilton is feeling as Vettel holds the lead, and the usually unpredictable Max Verstappen all involved, this one should again be a delight. Fingers crossed.

Happiness Is…Plans. Matt Kenseth is rejoining the sport and will drive some races for Roush Fenway Racing in a move that generated all the headlines this week. For Kenseth fans, well, you can dust off your circuitry, plug yourself into the matrix, and do your robot dance in celebration. For the sport, there should be an element of jubilation as Kenseth should help stabilize an organization that has largely turned into cow pucks.

The best part of the move, and permit this happiness element – is that signing Kenseth shows that RFR has absolutely no clue what they are doing. They had no young driver to put with the perennially underperforming Trevor Bayne in an effort to provide competition for the seat. They lack a presence that can shake cars down to get the best feedback. The move is basically is a cry for help.

In the best way, however, this may be exactly what they need: the first aspect of fixing a problem is to recognize that there is, in fact, a problem.

I believe Brian France was in charge of the start of the indy car race. He never does anything right, so it had to be him.