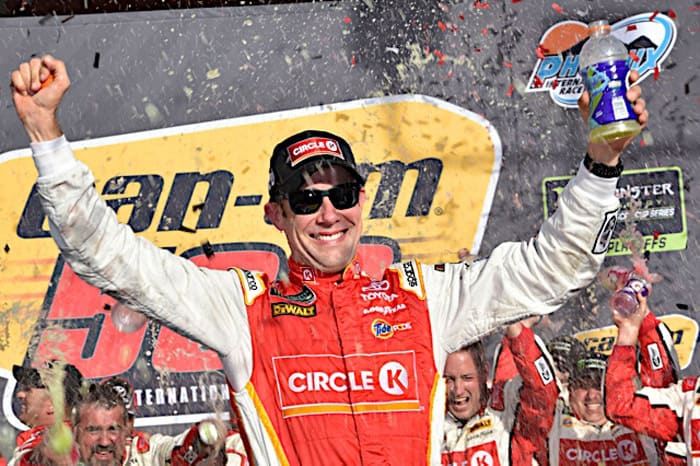 On Wednesday (April 25),the team held a press conference at the NASCAR Hall of Fame officially introducing Matt Kenseth’s return to the Monster Energy NASCAR Cup Series in a part-time role, sharing the No. 6 car with Trevor Bayne.

NASCAR Hall of Famer Mark Martin made the announcement. Martin was the man who introduced Kenseth to Jack Roush, a partnership that led to 24 MENCS race wins and a championship in 2003.

Along with the introduction, Roush Fenway announced a new partnership with Wyndham Hotels as an anchor sponsor for Kenseth in No. 6 car. Wyndham has been aligned with NASCAR for years; Super 8 Motels sponsored Petty Enterprises, and RFR stated that multiple teams were courting Wyndham as a primary sponsor.

Wyndham Rewards has teamed up with #Roush driver @MattKenseth as the official hotel sponsor of @RoushFenway! Check back soon for exclusive experiences for Wyndham Rewards members. #roushracing pic.twitter.com/xTxehs9UpT

Kenseth will make his official return to NASCAR on May 12 at Kansas Speedway.He will also particupate in the NASCAR All Star Race at Charlotte Motor Speedway on May 19.

The team said it would like to keep Kenseth for as long as they can, so there is a chance Kenseth’s return to Roush Fenway Racing could extend beyond 2018.

Exact details on Kenseth’s rides with the team have yet to be announced. It’s assumed Bayne’s races will coincide with the events primary sponsor Advocare has already signed on to represent through the end of 2018.

Knew there was money involved.

The guy who broke this story really deserves some credit. In a few days, he will be unemployed and still had the professionalism to keep his nose to the grindstone in the waning days.