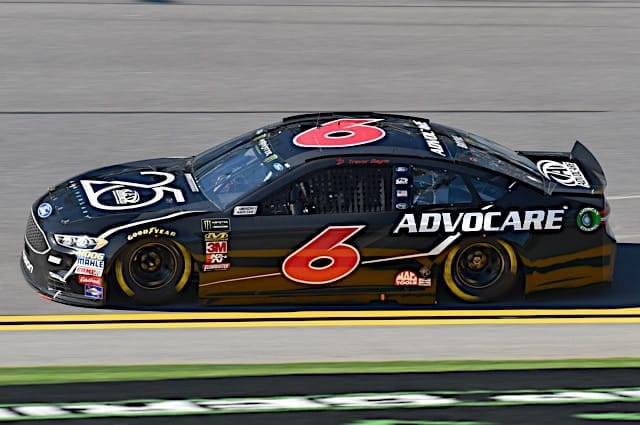 “Were you expecting somebody else?”

As Mark Martin took to the podium Wednesday at the NASCAR Hall of Fame to introduce the next driver of the flagship No. 6 Ford for Roush Fenway Racing, rumors ran rampant over what the actual nature of this announcement would be.

Was there a shakeup coming at Roush Fenway? Was Martin making the move to an ownership or director role?

He wasn’t going to drive again, right? Or was he?

The story Jordan Bianchi had broken 48 hours earlier was coming to pass: Matt Kenseth was coming back home to Roush Fenway Racing in a co-driving role with Trevor Bayne in the car that established the foundation for what would become – and what hopes to become again – the Ford super team that dominated intermediate tracks for the better part of two decades.

Over the past five seasons, the Roush organization has seen sponsors exit en masse, as well as championship-winning talent. What has resulted from what once was a five-car armada, reduced to a pair of dinghies that seemingly only showed up at restrictor plate tracks with a snowball’s chance of winning a race – with the occasional short track performance to supplant what had been a miserable few years on intermediates.

What has been made official in the first day or so since the announcement is that Kenseth will be piloting the Wyndham Rewards car in select races starting at Kansas Speedway in two weeks and then the All-Star Race. While he has obviously been tapped to help evaluate the status of the program and help provide direction for a team that has lost its way in recent years, let’s cut to the chase: Kenseth is the new driver of the No. 6 in 2019 and beyond.

Curiously absent at the announcement was Bayne — not a good sign if that was the guy you were hoping was going to stick around. This isn’t a part-time ride sharing service similar to what Mark Martin had enjoyed in his final few years, splitting time with Regan Smith, Aric Almirola and Brian Vickers. Nor is it similar to when AJ Allmendinger sat out for a couple of races when with the then-new-to-NASCAR Red Bull Racing, while Mike Skinner filled in as a consultant after some DNQs became cause for concern. Cup Championship talent doesn’t fiddle around with one of the most iconic numbers in modern NASCAR history, while he still has a desire to compete full time – and probably has a bit of a chip on his shoulder with how things ended at his last stop.

While it is true that Kenseth will be evaluating and providing solutions for improvement, it’s largely because the current driver hasn’t been able to do so.

Let’s be honest, while Bayne is generally considered to be one of the nicer guys in the garage, the radio chatter from week-to-week typically is less than complimentary. He’s finished 22ndin points the past two years, during races is averaging a 27th–place effort, and only has two top 5s each of the last two seasons. This in a season that has seen Ford win four races so far. That’s not to suggest he’s been driving cars that are capable of much more. Teammate Ricky Stenhouse, Jr. in 2016 and 2017 finished just ahead of him in 21st and 13th, respectively, the latter on the strength of a pair of restrictor plate wins and qualifying for the Playoffs. The rest of the season was a smattering of finishes in the teens and twenties – not much better than Bayne, but every little bit matters at this stage of the game at RFR.

Part of the shortcoming also revolves around experience; not just in starts or wins, but simply running toward the front, leading races and being competitive on a weekly basis. Neither Stenhouse or Bayne really knows what a dominant Gen6 car should feel like or what it takes to get there. Kenseth had plenty of experience running up front and winning races while at Joe Gibbs Racing, to the tune of 15 wins over five seasons. His 45 top-five finishes over that period are more than Stenhouse and Bayne have combined in top 10s.

So will there be an immediate impact and turnaround when Kenseth gets behind the wheel at Kansas Speedway in May? While it was the site of his final win thus far in a Roush Ford, I don’t think the No. 6 is going to transition from Lucky Dog fodder to a contender in one weekend, but they will likely see a nice lift initially. A top-15 finish would be realistic and establish a baseline of what needs to be prioritized and addressed. A top 10 would likely cement the fate of Bayne, and give the outward appearance similar to the difference between Danica Patrick at Aric Almirola’s results in the No. 10 car so far this season.

The goal isn’t to win out of the box, but to gauge the gap of the talent level versus the capabilities of the cars at this juncture. Kenseth is every bit the driver Kevin Harvick or Brad Keselowski are – but their Fords are not the same ones performance-wise (engines aside) that Kenseth will be wheeling at first. There’s not much expectation that the No. 6 is suddenly going to perform as Harvick’s Ford; though there is probably some information Kenseth has gleaned after five years in a different organization that was accustomed to winning and winning quite often. This will likely be canceled out early on, as the team tries to get acclimated to a feel and cars that Kenseth is accustomed to.

While more will flesh out over the coming weeks regarding the true nature of the contract and when full-time status will become a reality, it is a nice story for fans to rally around. While the season started off with story after story of new young drivers replacing household names and stalwarts of the sport, Kenseth’s return is a win for the old guard, and fans who may have felt abandoned having once of the few remaining faces of NASCAR’s peak years having been unceremoniously put out to pasture a few months ago. Couple that with the “Mama I’m Coming Home” story line of his return to where his career began almost 20 years earlier, with his friend and advocate from the beginning hastening his return, it was both a surprise and positive moment to both report and promote, and for many fans to celebrate.That is of course unless you’re a Bayne fan.

Vito it didn’t really take 12 paragraphs to say Bayne will end up unemployed. Is it imminent, probably not, but it is obviously coming.

A marginal driver in marginal equipment produces marginal results. But with an super size ego owner, it is the driver’s fault every time.

Trevor Bayne’s race driving career is going down the path of Brian Vickers. I wish them the best with their health issues.