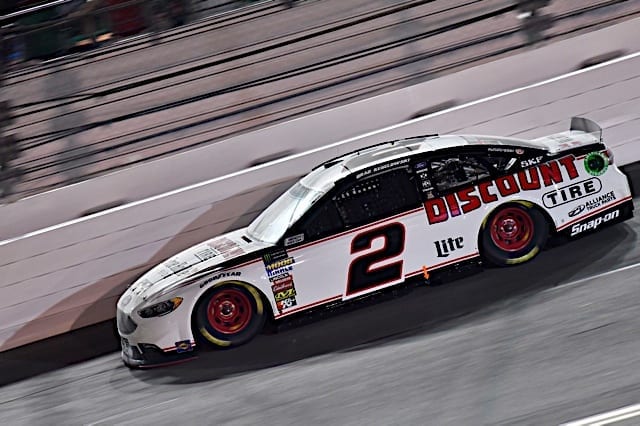 Kyle Busch’s win this past weekend at Richmond Raceway made it three in a row for him and the No. 18 team. This comes on the heels of Kevin Harvick’s three wins in a row. Will we see one of these drivers, or somebody else, win three in a row this season?

Wesley Coburn: If anyone, maybe Brad Keselowski or Martin Truex Jr. No one else will reel off three straight, but back-to-back is possible. Kevin Harvick and Kyle Busch will snatch up several more wins apiece. We’ll have 10 winners by the start of the playoffs.

Mark Howell: My bet for next three-timer is Truex. Like Harvick and Busch, once he hits his stride, he’s good to go for the hat trick.

Matt McLaughlin: The law of averages looking over the last few seasons seem to indicate another driver winning three consecutive races is unlikely, but nothing is impossible other than getting excess toothpaste back into the tube.

Amy Henderson: Wining three in a row is fairly uncommon, so it’s unusual to say the least that two drivers have done it in nine races.  Can anyone else do it this year?  Unlikely, but we certainly saw Truex get on a hot streak last year, so my money would be on him.  The other driver to keep an eye on is Chase Elliott, because he’s been so close to that first win, and once he gets it, he could go on a tear.

Vito Pugliese: Truex hasn’t quite started to heat up yet. Given his ability and recent wins on road courses coupled with past Pocono Raceway, Kansas Speedway, Chicagoland Speedway wins — and a complete domination of Charlotte Motor Speedway — there’s more than a few opportunities for him to reel off three or four straight wins as the season heads into summer. I wouldn’t count either Keselowski or Joey Logano out, either; once any of these guys gets on a roll, they’re hard to stop.

This weekend, we head to Talladega Superspeedway, a track that some call the great equalizer. Who is currently the best restrictor plate racer in the Monster Energy NASCAR Cup Series?

Pugliese: Keselowski, hands down. Be it a James Finch Chevrolet, one of two Dodges in the field, or a Ford with Roush Yates power, he is the man to beat anytime the series rolls into Talladega. He might not have quite the fan following or fear that Dale Earnhardt Sr. and Jr. had there, but at the end of the race, that No. 2 is going to be the car you have to pass or block to have a shot at winning.

McLaughlin: Anyone who survives a plate race without tearing their car (or themselves) to shreds has done a fair day’s work. Dale Earnhardt was the master of Talladega, but between all those wins, more than once he ended up either upside down or on fire — sometimes both. It’s not real racing, as far as I’m concerned, but as long as nobody is badly hurt on either side of the catchfence, I’ll just pack up my rock and roll.

Henderson: Keselowski and Denny Hamlin come to mind first; they’re both always in the mix unless, of course, they set caught in the Big One. It seems like a lot of the drivers out of the game in the last couple of years were also the sport’s best plate drivers — Earnhardt, Jeff Gordon, Tony Stewart among them — so it will certainly be interesting to see who else steps up to the table in the next couple of seasons. Plate racing is a little funny–some of the best plate drivers aren’t the best everywhere (though Gordon and Stewart would probably argue that), and some of the best drivers everywhere else are not who you want in the office pool at Daytona and Talladega (I’m looking at you, Jimmie Johnson).  I’d take Keselowski and Hamlin about anywhere, but others, like Michael McDowell or Ricky Stenhouse Jr., are the kind of plate specialists you look at twice only at those tracks.

Howell: While Stenhouse managed to master the plate tracks last year, he’s running with a talented crowd. Team Penske seems to have the upper hand right now, and you can’t ignore Clint Bowyer at Stewart-Haas Racing.

Matt Kenseth is coming back on a part-time basis to drive the No. 6 Ford for Roush Fenway Racing. Will this springboard Kenseth into a full-time ride for next season?

McLaughlin: Matt Kenseth‘s return seemed to be facilitated by his bringing a sponsor to the table. Trevor Bayne had 10 races ahead with no sponsorship this season. If a sponsor signs on and stays on, it’s Kenseth’s ride for the foreseeable future.

Howell: I don’t see Kenseth coming back full-time. He’s enjoying family life too much. I do see him in an advisory or consulting role at Roush Fenway. His experience can help turn the team around, especially as it gears up for the Mustang next year.

Coburn: I would hold off on predicting that for sure until Kenseth has run a few races to see how he does.

Pugliese: Given that Bayne wasn’t part of the joyous reunion and revelry…. uh, yeah, he’s gone. Kenseth will be there for the foreseeable future and will likely move into a management/ownership role in a few years. The only way Bayne stays is if Advocare dictates via sponsorship dollars that the Nos. 16, 60, 99 or 97 is resurrected from the ashes of mothballed Roush Fenway Fords.

Henderson:  No. Unless a big sponsor materializes, and that’s not happening for anyone these days. I wonder if this role is due in part to Bayne’s health, and if that’s the case, another split schedule could happen next year, because Roush Fenway isn’t exactly stacked with drivers ready to move up to Cup. I find all this playoff waiver talk a bit silly, because AdvoCare wants Bayne in the car for their races, and while Kenseth could make the top 30 driving full-time after missing nine weeks, doing it on a part-time schedule is not quite as realistic. He’s being groomed for another long-term role with RFR.

Hershel McGriff, a 90-year-old NASCAR veteran, will be making a NASCAR K&N Pro Series West start at Tucson Speedway for Bill McAnally Racing next month. How old is too old to race competitively?

Howell: Age is only an issue if a driver becomes a safety hazard to others on the track. Speaking from experience, it’s all too easy to lose your vision, timing and coordination when you reach a certain age. That said, Harry Gant won races into his 50s. As long as a driver can keep it real, they can be real old, depending on how you define age.

Coburn: Define “competitively.” If that means running up front and contending for wins, given how drivers have gotten younger compared to most of NASCAR’s history, I would estimate around 50. If that means not a danger to himself or others on the track, I would guess around 60.

Henderson:  There isn’t some magic age at which a driver is suddenly too old to compete.  I mean, there are guys on the track in their 20s who are moving chicanes, and older drivers doing quite well.  My worry on a driver as they near McGriff’s age is that a crash that would be minor for a young driver could have devastating results for a senior citizen.  Can he get out in a hurry in case of a fire?  Is his eyesight good enough for him to avoid trouble?  Are his reflexes good?  I’m more worried about the answers to this questions than about a number on a page. If a driver isn’t a health risk or a danger to himself or other drivers, then let him race.  Don’t expect a miracle finish, but safety is the main factor here.

McLaughlin: That’s up to the driver. For many of them, it’s not the racing itself but the constant sponsor demands and appearances that finally get to be too much. With maturity, you actually get better at some things, like making loud groaning noises getting up off the recliner. You ought to see how fast I can still drive if I have an Old Country Buffet early-bird coupon that expires at 4 p.m.

Being the best restrictor plate driver is like being the best Roulette player. No matter how well you have done in the past, the odds are still 37-1 AGAINST you with the next spin of the wheel.

Or to put it another way, how does luck equate to skill?